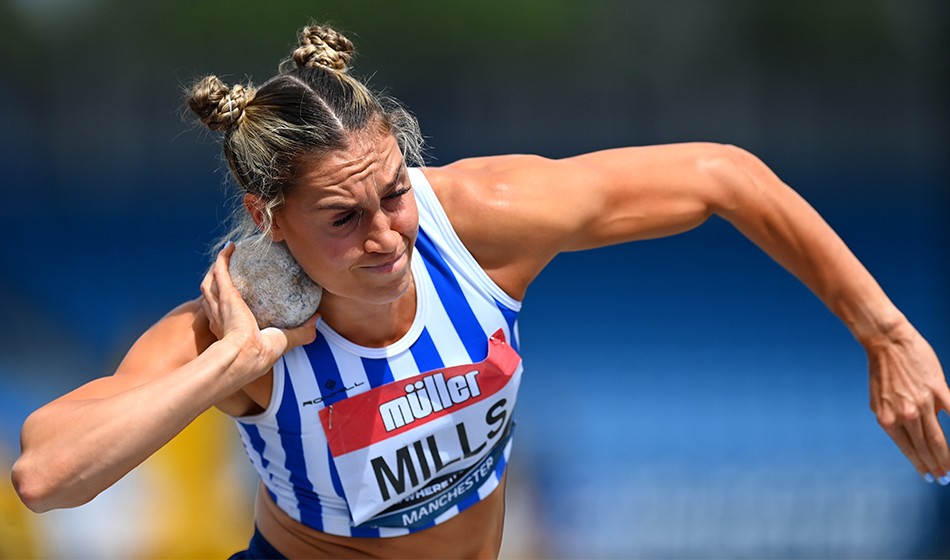 The No.1 British ranked heptathlete on Birmingham 2022, going for gold and using London 2012 as motivation

The Commonwealth Games in Birmingham will be special for a lot of home nation athletes who take to the track, field and roads but success for Holly Mills would taste extra sweet.

The 22-year-old is the No.1 ranked British heptathlete and will make her senior outdoor championship debut in front of a 30,000 expected sell-out at the Alexander Stadium, when she opens up her heptathlon in the 100m hurdles on Tuesday (August 2).

The prospect of such a partisan home crowd was one of the reasons why Mills made the bold decision to miss the entire World Championships, in which she had the qualifying standard, to focus on Birmingham.

“It’s been a difficult decision to make because it’s the world championships, says Mills, who didn’t regret the decision. “If you asked me two years ago I would’ve thought that was absolutely ridiculous but at this point in my career I think that this was the right decision for me.

“I could’ve gone to Oregon, nailed it and got a medal but for my first senior outdoor championships to be a home Commonwealth Games, I need to put myself in the best position possible to win a gold medal.

“I’m definitely going for gold medals. To say that I’d be going for silver or bronze, I’d be slightly disappointed with that. We are aiming for golds this summer.”

Instead of making the nine hour plane journey to and back from Oregon, she took part in individual disciplines in the weeks after finishing sixth at the prestigious Hypo-Meeting in Götzis with a personal best of 6260 points.

Sotherton is coincidentally Team England’s Track and Field Team Leader for Birmingham 2022, while Johnson-Thompson is the reigning Commonwealth champion but hasn’t rediscovered the form that saw her win world heptathlon gold in Doha three years ago.

It’s quite the turnaround for Mills after she missed out on the Tokyo Olympics by a couple of places. However, it’s not surprising given the 22-year-old was just seven points from pentathlon bronze at the World Indoors back in March, her debut international championships. The rise in performance has been quick to say the least.

“It’s a different experience for me [being ranked number one],” adds Mills. “Over the past year I’ve been number two behind KJT and that’s definitely made me very hungry to finally get on top. After several disappointments, winning a medal would just put all of the effort that people have put into me so worthwhile. People have put their lives on hold to help me achieve my goals.

“I think with the strength of the field going in, especially with the English team, we’re aiming for around 6400 points and above. I think that will definitely put me in the mix and it’s well within my capabilities.

“Where I look at where I’m ranked on the all-time list for the country, the names above me make me think wow. The next time I go up the ranking I’m overtaking one of those names. Having those calibre of athletes that have gone before me and now thinking that it’s my time to carry on the British legacy of heptathletes is a really nice feeling to have.”

Mills grew up in Andover, Hampshire, a mere two hour drive directly south from Birmingham. The prospect of a home championships is not something that many athletes get in an entire lifetime and the atmosphere and energy from London 2012 – the last time that England hosted such a big multi-sports championships – is now motivation for Mills.

The fact that it is a decade since the Olympics is extra special.

“My parents messaged everyone when the tickets were released, thinking that they weren’t going to get that many, but it was the case that everyone got tickets on all four sessions for all four days,” recalls the heptathlete.

“The pandemic has definitely given me more perspective going into the Commonwealth Games. Whereas I think before I took all the major championships for granted. Now that they’re back on it’s going to be incredible doing it in front of crowds and I’m really looking forward to all of that.”

“Knowing that the majority of the crowd will be cheering me on as an English athlete is a whole different experience. I’m used to crowds but not that intensity.”