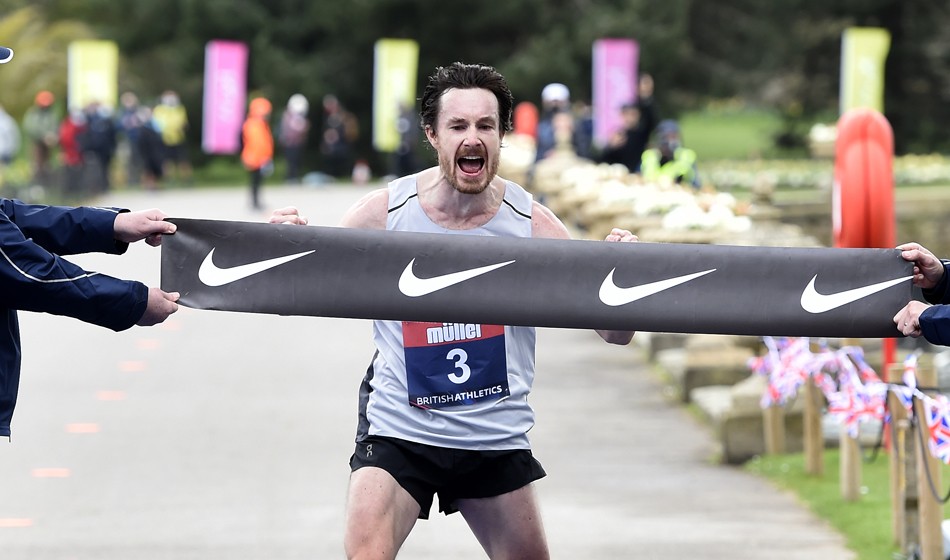 Marathon man on his quest for the holy grail of satisfaction, the four-digit code that unlocked his Achilles agony and the horrific hand injury that almost ruined his Olympic dreams

Chris Thompson’s victory in the British Olympic marathon trials captured the imagination of the sporting world. Storming down the finishing straight at Kew Gardens, the 39-year-old punched the air and pointed to his head before roaring his delight as he grasped the finishing tape and hurled it to the ground. It was the athletics equivalent of a Marco Tardelli moment.

His story contained the perfect storm of inspirational factors. On the eve of his 40th birthday many considered him past his best and he became detached from the lead group in the early stages before mounting an incredible comeback. Adding to the drama, he had become a father for the first time only five days earlier.

Yet the true battle to earn a ticket to Tokyo began in earnest more than two months earlier when his right hand was crushed by a removal van.

Thompson was moving house with wife Jemma when the accident happened. The pain knocked him unconscious. “It was definitely a hospital job,” he says. “The hand was completely sliced open.”

His chances of racing at the Olympic trials were immediately thrown into jeopardy. “I nearly lost my hand,” he says. “It somehow missed the tendons, the nerve endings and the ligaments but they didn’t know that until they did the operation, which lasted two-and-a-half hours.”

Through a twist of fate, the surgeon who operated on Thompson was a former athlete called Gavin Brigstocke who used to compete in the same races. “No pun intended, but you’re in good hands,” Brigstocke told Thompson.

Thompson continues: “Everyone who had seen the hand were really concerned. But two things were going through my head. One, I have an Olympic trials coming up in nine weeks and, two, will I be able to hold my child?”

Thompson was told he should have three weeks off running. “I thought ‘three weeks?’ That’s not happening,” he remembers.

But after a successful surgery – which included a metal plate inserted into his hand – they reached a compromise. Thompson would be allowed to run wearing a lightweight cast, but was warned it carried risks. “I was told that if I fell on it, it wasn’t going to be good. If it got infected, it wasn’t going to be good. It was snowing at the time, too. But I needed to take a gamble. I knew I had to get back running and I took full responsibility if anything happened to it.”

If this wasn’t painful enough, he had to break the news to his coach and close friend Alan Storey. “I called him from the hospital,” Thompson recalls. “I’d just had one of the best sessions that I’d had in about two years, but then I had to tell him, ‘look, Alan, I’m so sorry. You won’t believe what’s happened’.” 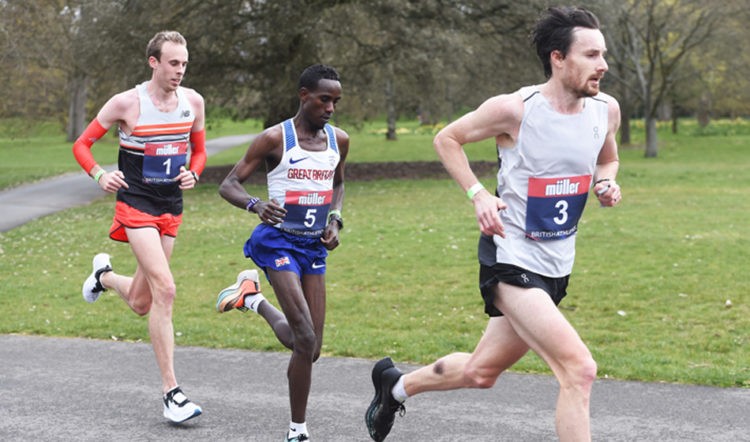 Despite being unable to swing his arm properly and having pain in his shoulder, Thompson slowly got back into training. “There are so many things like this that happen in an athlete’s career and you have to find a way,” he says.

“After five weeks post-surgery, I was back to where I was before the accident. I still had four weeks to the race and then I had the best 10 days of training I’ve ever had.”

This included a 25.2-mile run in 2hr 15min. “It was the manner of it,” he explains, “because I started off at about 5:45 miles and then picked it up.” This was followed a couple of days later by a 15-miler in 75 minutes around the twisty paths of Bushy Park in London.

“Alan later told me it (the accident) would have buried a lot of athletes. He said the way I handled it and compartmentalised it and took a step back and gathered myself and went again allowed me to find a way back and quickly.”

Thompson adds: “Thing is, if you tell someone this story it’s not going to put you on an Olympic team. I had to find a way to get on the team with this.

Thompson is recalling this story partway through a two-hour video call with AW. As an athletics writer I was at the same European Under-20 Championships in Latvia with a teenage Thompson 22 years earlier in 1999, although I barely remember him being on the GB team as he finished back in 12th in the 5000m final.

That was simply an underpar run, though. Thompson’s talent was always clear and four years later he out-kicked Mo Farah to win the European under-23 5000m title in Bydgoszcz, Poland (pictured below). “Trevor Frecknall from AW described me as ‘precocious’ at the time,” Thompson remembers, “and I had to ask people what it meant!” 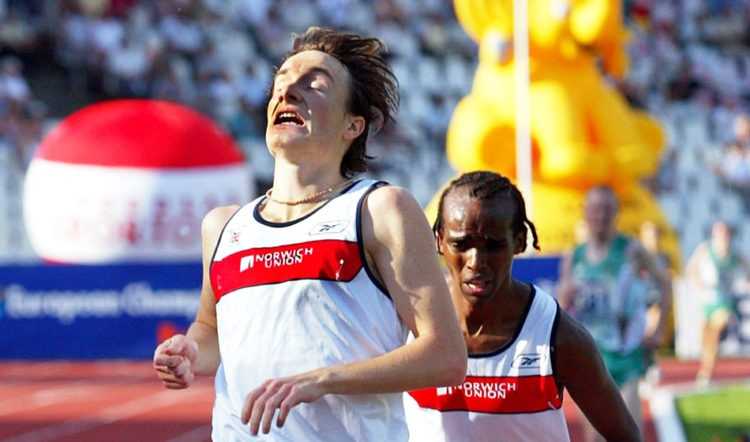 As Farah went on to win 10 global track titles, Thompson found himself racing in the shadow of his GB team-mate. At the European Championships in Barcelona in 2010, for example, Farah won 10,000m gold as Thompson took silver. Thompson also clocked fine track times of 13:11 for 5000m and 27:27 for 10,000m but, as Farah went from strength to strength, Thompson struggled with injuries, most notably Achilles problems.

His hand accident aside, it has been his determination to over-come the serious Achilles issues that make his Olympic trials win so remarkable. To describe it as career-threatening is not an exaggeration either.

In 2014 he began being coached by Storey and made his marathon debut in London with 2:11:19. Thompson had struggled with on-off Achilles problems for several years but in 2014 he had surgery which left him in a protective boot for three months and unable to walk properly for six months.

“The doc and surgeon broke the news to me in a kind of ‘this is your career over’ delivery,” Thompson remembers. “They didn’t know categorically but they said ‘sorry, Chris, this is bad’.

“Before the surgery they said they might have to completely sever it and reattach it. And that would have been game over. But when I woke I found they’d saved some of the tendon.”

Despite this it took Thompson six years before he could run pain-free. “I thought I have to either see this through until I find the ‘holy grail of satisfaction’, or I bin it.”

He decided to seek the holy grail and enjoyed his first run without his Achilles aching in May 2020. “It was all on a healing curve throughout that time but there were periods when I didn’t want to get out of bed in the morning because I knew it would hurt so much on my first steps.”

Thompson finally got rid of the Achilles pains with an incredibly patient regimen of strength and conditioning exercises and dietary changes. The latter included eating collagen supplements and more protein and he explains: “I was told this a long time but apparently your muscles regenerate and after six months it’s completely new tissue to what it was six months earlier.

“You’re constantly rebuilding and repairing. So it stands to reason that what you put into your stomach is effectively a first aid kit to repair your body. The ability for our body to draw out the goodness in food and to send it to the right place is another part of that process.

“What works for me might not work for someone else,” he adds. “When I’ve had injuries, it’s like having a padlock to unlock. And my four-digit code will be different to someone else’s. What I’m lacking will not necessarily be what someone else is lacking.

“My Achilles was like a massive fishing knot and it had really got bundled up,” he continues, “and I was slowly unravelling it bit by bit. So even though the pain was quite bad, I was slowly unpicking this knot over the years.”

After finally figuring out his padlock code to solve the Achilles injuries, Thompson went to Spain to prepare for the 2020 London Marathon and original Olympic trials last April. But he was then forced to fly home due to the pandemic.

In the summer of 2020 he largely ticked over, biding his time for the Olympic qualifying race to be announced. At London last October he clocked 2:13:32 to finish fourth Brit home. But when the official trial took place in March this year, he rose to the occasion in memorable style.

Given the traumatic build-up, the years of injuries, the birth of baby Theo and his mid-race resurrection, was it his finest moment?

“It is the most content I’ve felt in athletics,” he reflects. “When you look at everything, it is.

“I may have messed up a lot more than I’ve succeeded over the years but, you know what, I’m proud of it. And a lot of the reasons I messed up was because it came from a good place.

To finally reach the stars at the Olympic trials on March 26 meant that all the hard work, pain and anguish was worth it.

“It was more than just a performance. It was everything. It was the occasion. It was the week I’d had and the challenges I’d had.

“It puts a really nice glow on my career and it justifies to me – and for Alan – the continued fight to keep trying and to keep going when you know there’s more in there.”