Dick Fosbury is no flop 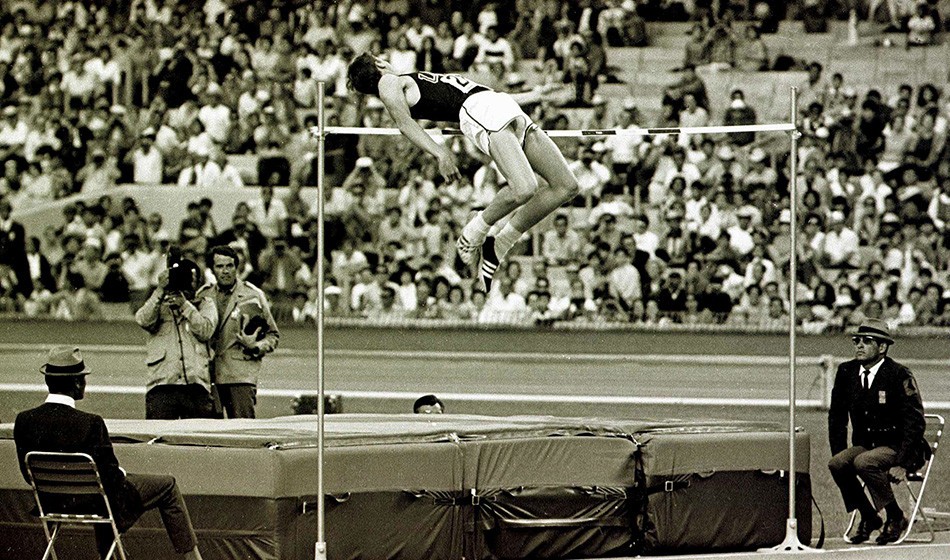 On the 50th anniversary of the famous Fosbury flop Olympic high jump clearance at Mexico 1968, Stuart Weir shares great insight from an interview with the technique’s pioneer

Dick Fosbury won gold at the Olympics in 1968, exactly 50 years ago, and changed the high jump forever.

The anniversary made me recall meeting him at a reception during the 2011 World Championships and hearing how he had pioneered the technique which was to be called ‘the Fosbury flop’.

Initially high jumpers ran straight at the bar. Then the scissors technique became the normal method of clearance, with the jumper throwing one leg and then the other over the bar in a kind of scissors movement. By the 1930s the Western roll technique had become popular, with the the inner leg used for the take-off, while the outer leg was thrust up to lead the body sideways over the bar. The straddle technique saw jumpers take off as in the Western roll, but rotating their torso around the bar belly-down.

Fosbury recalls his introduction to athletics at school: “In track and field our teacher had us try every event so I ran, I threw and I jumped. And he taught me to high jump using the Western roll where the jumper ran at the bar with a straight approach and aimed their arm and leg at the bar to go over belly first and land in the pit – which was the standard technique at the time.

“The other technique that he taught us was the scissors, where you run at the bar and clear the bar with your seat while your legs did a scissor kick over it. For me this was a simple technique. And of course in those days you were landing in sawdust or wood chip, which was a technological advance on sand. So the landing was as important as clearing the bar so that you survived the jump!

“As things improved, wood chip was a good environment for us to land in. All the schools had sawdust pits then the new environment was with foam and that is what really opened it up, because we were jumping into a safer environment.”

Now for anyone living in the modern era, it may be hard to grasp and believe that before Fosbury, no Olympic high jumper went over the bar backwards. But that was how it was.

Then Fosbury, a frustrated schoolboy obsessed with the high jump, realised that he was never going to improve using traditional methods.

The best high jumper in the world at the time was the Russian Valery Brumel. In the years 1960-63, Brumel took an Olympic silver and broke the world record six times before becoming Olympic champion in Tokyo in 1964. The young Fosbury studied him.

“I read everything I could about his technique and his training,” he says. “That was where I learned about his speed – his greatest asset.”

Fosbury was using the scissors technique and felt comfortable with it but his coach explained that the technique was too limiting, so he would have to change in order to progress. Of course, the coach wanted him to change to the classical style.

“I tried the straddle technique and the belly roll technique but had very poor results,” says Fosbury. “So I asked my coach if I could go back to the scissors. He said, ‘don’t quit yet but it is your decision’. So I decided to go back to scissors and at age 16 (in 1963) I jumped a personal best height of 1.65m. Then they raised the bar and I knew I had to try something different to get over it.

“I knew I had to lift my hips up and to do that I needed to get my shoulders back out of the way. And I cleared the bar at the next height, eventually jumping 1.77m so I improved by 15cm that day.

“In that competition I changed my position from sitting on the bar to lying flat and going over on my back – upside down from everyone else. The change made me competitive and I finished fourth in the meet.

“For the next two years I would lead with my shoulders and was going over the bar at a slight angle. All the time I was doing it by feel as there was no model to follow. I was creating it as I went. In my second year (senior year in high school) I had turned my back to the bar and arched over the bar to fall into the pit. And by then by 1965 the flop had arrived.”

It wasn’t until 1968 that the Olympics came into his thoughts. “I had no ambitions because the Olympics seemed so far away and such a high level of competition that I never imagined reaching it,” he says. “I did not have that Olympic dream until 1968 when my training began to produce better results.”

He went to regional trials and USA nationals and was selected for the Mexico City 1968 Olympics. He jumped 2.24m to win the gold medal from team-mate Ed Caruthers, with Russians third and fourth. Sadly his hero, Brumel, had retired following a motorcycle accident.

Having won the gold and broken the American record, Fosbury asked for the bar to be raised to 2.29m, hoping to break Brumel’s five-year-old world record of 2.28m. However, none of his attempts at 2.29m came close.

Contemporary reports say that while coaches were appalled at his unorthodox approach, the crowd was captivated. Fosbury’s analysis of the 1968 Olympics is that there were better jumpers in the competition but that his technique gave him a definite advantage. With hindsight, he adds: “No one realised what the advantage would be. But, as history has proved, this was a better technique.”

Fosbury never set out to change the sport. He just found a technique that worked for him.

“I have had the blessing and good fortune to have made a contribution to the sport but I did not set out to do this,” he says. “I was not trying to change the event. I knew that my technique was my path to success. And I had this technique which was mine – mine alone – and I thought that someday someone would use it. But who knew whether it would be two or three high jumpers or 200.

“The criticism of other coaches did not really matter as long as I was meeting the rules and reaching the standards.”

That in the 1972 Olympics, four years later, 28 of the 40 competitors used Fosbury’s technique vindicated him totally.

Fosbury is quick to point out that he was not the first to jump backwards as Debbie Brill, and another jumper in Montana, also came up with the approach of jumping backwards. He adds with a twinkle: “I was just blessed to be the first one to discover it and have success with it at this high level. So I got naming rights, something I am very proud of.”

Another unique contribution that Fosbury made to the high jump was the development of special shoes with Adi Dassler (of adidas). 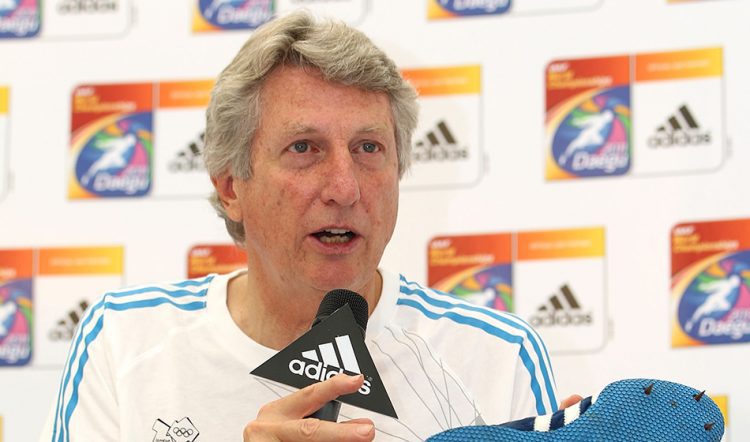 “At that time high jump shoes were leather and on the sole, some kind of grippy surface,” he says. “High jump shoes are very special shoes for our event because they have a build-up on the forefront. After my success in the Olympics I talked with Adi Dassler. We had four spikes at the front and also heel spikes for traction and to keep us from slipping on take-off. After the meeting, Adi sent me shoes with a single spike.”

Dassler was a designer and an inventor of athletics equipment and Fosbury an engineer. Together they worked through several prototypes to reach a shoe that worked well in high jump.

Fosbury failed to make the US team for the 1972 Olympics and his career was effectively over. Having proved to the world that his technique worked, he had arguably achieved his goal.

Of course, Fosbury competed in the amateur era. He said that the flop “brought me gifts – not necessarily monetarily … but I have met presidents and kings, seen the world, shared my life with wonderful people. It opened doors and allowed people to perceive me in a positive light.”