Andrew Osagie on the greatest 800m in history 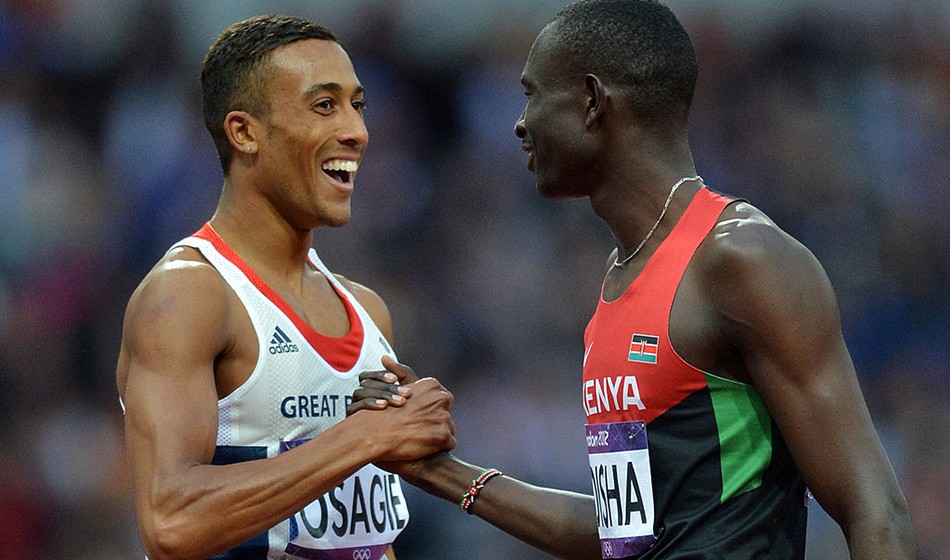 British middle-distance man ran the race of his life at London 2012 but still finished last. Here he explains why he looks back with mixed emotions on the monumental two-lap event

The men’s 800m is widely regarded as the best race of the London 2012 Olympics. From winner David Rudisha through to last-placed Andrew Osagie, the race oozed quality. The event saw seven PBs, three national records, one world junior record and a world record of 1:40.91. There wasn’t a pacemaker or super shoe in sight, either.

Osagie’s time of 1:43.77 would have been good enough to win gold at the previous three Olympics and was not beaten by another British athlete for almost a decade. “It was,” he says, “a pure test.”

Looking back fondly on arguably the greatest 800m race of all time, he continues: “Rudisha was unbelievable. What a guy! Off the track he’s an incredible person – a family man and always willing to chat. As a competitor he was able to switch his smile into an aggressive racing style where he was able to push himself to a level which was almost unattainable. I’m really happy that I was around to be around to race him and to be part of his legacy.”

The race on August 9, 2012, saw Rudisha blast into the lead full of purpose. As the Kenyan went through the first 200m in a blistering 23.6, Osagie settled into seventh place with only five-time US champion Nick Symmonds behind him. Pressing on relentlessly, Rudisha passed 400m in 49.28 and 600m in 1:14.30, by which stage he was drawing away from his rivals.

Rounding into the home straight with the aim of breaking his own world record of 1:41.01, which was set in Rieti two years earlier, Rudisha strode through the finish in 1:40.91 as his opponents recorded a raft of red-hot times.

Osagie went into the Games in the form of his life. “I was on the crest of a really positive wave,” he remembers. “I was happy, content and confident. I’d run PBs and under 1:45 four times and I’d had an incredible build-up.”

Lining up against Rudisha at a home Games would have been a terrifying proposition for many but Osagie says he had no nerves. “Even now I have such a smile on my face thinking about it,” he says. “I absolutely revelled in that position. I love pressure.

“Craig (Winrow, his coach) and myself had been through tough times due to injuries. I was seemingly injured every three to six months. Shin splints, stress fractures and all sorts that I had to manage. But for about a year and a half before the Olympics we nailed the ability to do more consistent training and it allowed me to do what I enjoy best, which is to race.”

Osagie was drawn against Rudisha in his heat and semi-final, too. The latter was particularly pleasing as he clocked 1:44.74 behind the Kenyan and ahead of Symmonds to make the final. 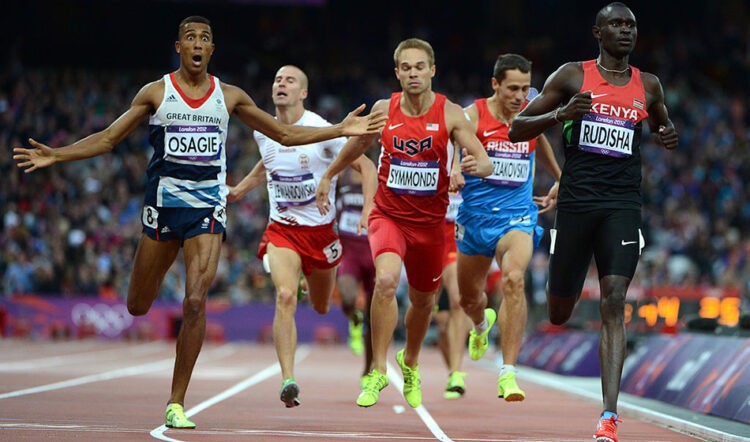 His sharpest memories are a little random. He remembers enjoying a slice of pepperoni pizza with his lunch as a treat after his heat, for example. Then, before the final, he recalls lying on the floor in the call room with his feet up watching Symmonds put tape over a tattoo on his arm.

“The semi-final was incredible and from the moment I finished it through to the final I was on cloud nine. I felt this contentment. The weight was off. I’d crossed the final hurdle as I couldn’t really screw up from that point.”

Osagie was sharing an apartment with athletes like Chris Tomlinson, Robbie Grabarz, Ross Murray and Chris Thompson. “They really helped as it kept me grounded during the rounds,” he remembers. “Looking back, I loved every minute.”

When introduced to the crowd on the start line in the final, Osagie did his trademark ‘Osagie boom!’ gesture with a big smile on his face. “My target time was low 1:44 and thought it might place me about fifth and, if so, I’d be in with a chance of a medal. But obviously David and the others had very different plans. I didn’t imagine he would front-run a world record in my home city!”

Osagie had mixed feelings with his own result. “At the time I felt I could have run significantly quicker if it hadn’t been for badly timed injuries and (lack of) consistency. But that’s the mentality of an athlete – to always want more.

“It was a shock that I’d run that time and still finished in eighth and last place. I didn’t dip at the line and was really pissed off that I’d underperformed on my home track. So that’s one of the hardest and biggest things I took from that day.

“On the good side I know I gave my all on the day and yet couldn’t really change anything. It was a pure test and that was the best I was on the day.” 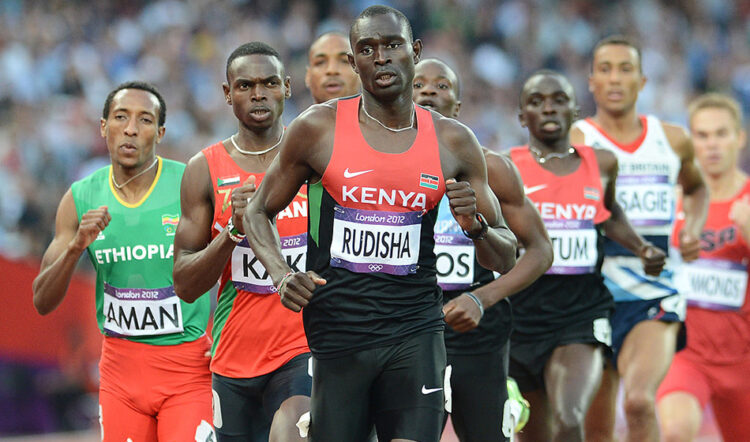 Despite running the fastest time of his life, the race was a humbling experience. “One of the hardest things was that I pushed myself to my absolute limit and came last. It took me some years to get over that mentally. Where did I go from there?

“Also, it was such a big occasion. I would never have that much support and attention again. I spoke to a lot of athletes from those Games who also found it quite tough afterwards. It sounds really ‘spoiled’ to say this, but when you’re going to a stadium that only has 40,000 people instead of 80,000, it is a comedown.”

Now aged 34, Osagie was still running 1:46 indoors just days before the pandemic struck in 2020. His wife – the former athlete Emily Pidgeon – was about to give birth to their first child, so he prioritised his family and got a job in marketing.

Things are going well as he has become European brand manager for a tech company called ATG which provides software to auction houses. He is still running, too.

Clearly not the retiring type, he smiles: “I think you only retire if you have a title, a bit like a boxer. I’m never going to retire and I might do some races again at some stage in my life.”

Yet nothing surely will ever top that memorable Thursday night in the London Stadium 10 years ago. 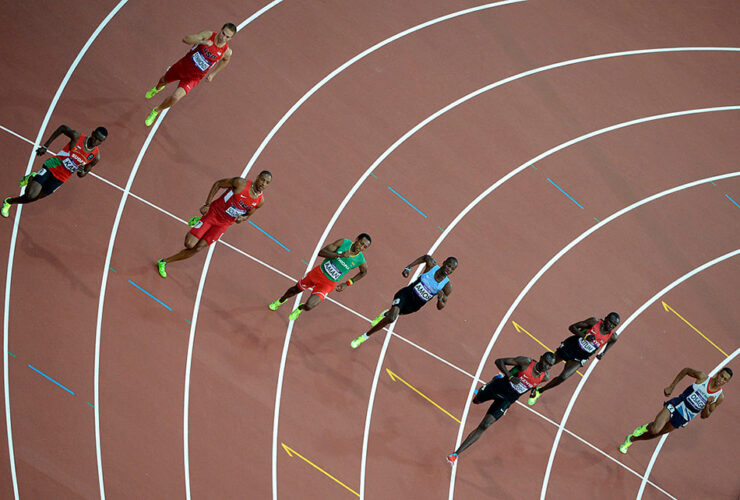 “It is still jaw-dropping. When we had the events I would often ask somebody to come and sit next to me that I knew it mattered to so I asked [Kenyan former steeplechase and 1500m Olympic champion] Kip Keino to come and sit with me to watch the 800m.

“He came up to his seat minutes before the race because he had been on the warm-up track to talk to the two Kenyan 800m runners. He’d asked what the team tactics were and the youngest [the 17-year-old Timothy Kitum] had pointed at David Rudisha and said: ‘I’m going to follow him’. Rudisha took one look at him and said: ‘Don’t do that. I’m going to break the world record today and if you do [follow me] you will die’.

“Kip relayed this story to me and that was when I sensed [something special was coming]. He said: ‘I’ve never seen a guy so focused on one thing’.

“It was an extraordinary performance. The mental presence and supreme physical confidence going into an Olympic final, thinking ‘actually, it’s not about winning, it’s about breaking the world record today’ – I think that’s what most athletes like me were so stunned by.

“And then to execute it, without pacemakers … it was not just the best athletics performance – for me it was the single best performance of the Games in any sport.”