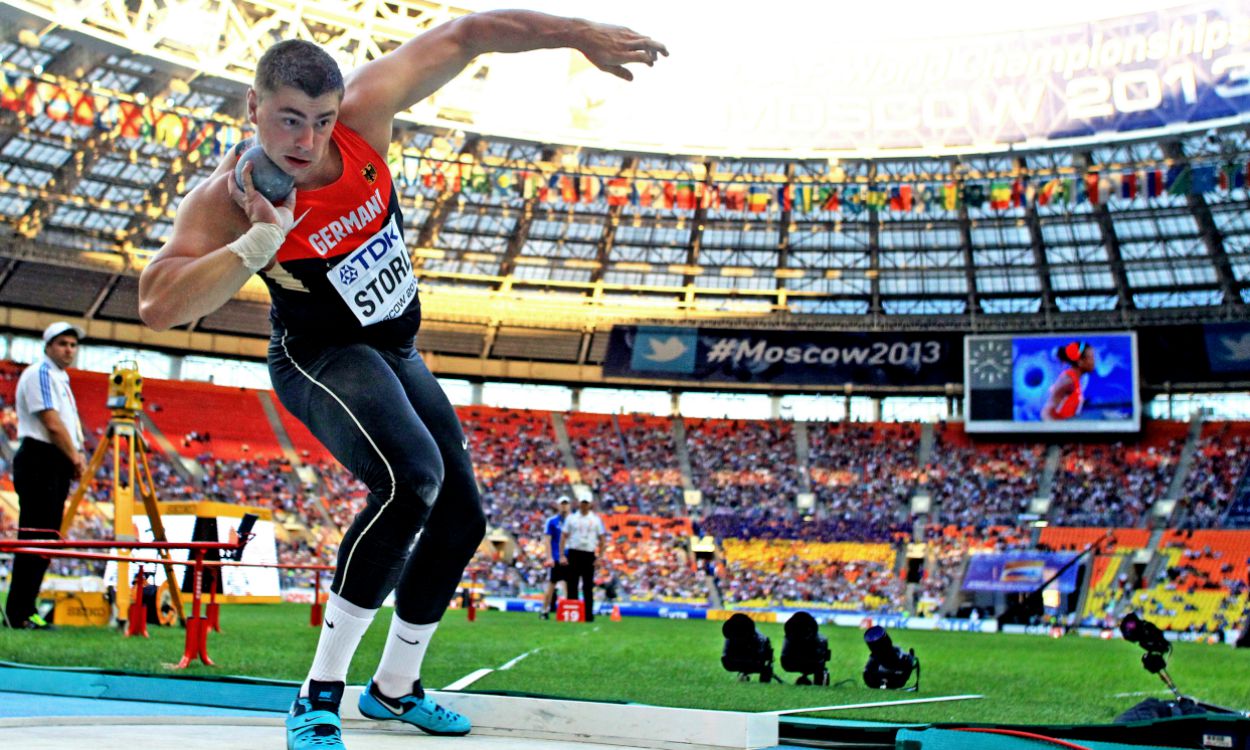 The first world champion in Helsinki was expected to be Udo Beyer, who had set a world record 22.22m in June but injured he could only finish sixth as the gold went to third-ranked Edward Sarul.

The Pole led early on but was lying second behind Ulf Timmermann’s 21.16m until the last round when he produced a winning 21.39m.

Italian Allessandro Andrei was the home nation’s favourite in Rome in 1987 having set a recent 22.91m world record and he set a championship record 21.57m in qualifying. European champion Werner Gunthor broke this with his opening throw of 21.63m. American John Brenner took the lead with 21.75m in the second but the Swiss responded with 22.12m in the fourth and 22.23m in the final round when he was booed by the partisan Italian crowd. Andrei improved to 21.88m to take second.

In Tokyo in 1991, Gunthor again saved his best for last winning easily with a 21.67m final throw but his 21.61m opener was almost a metre up on the second best thrower.

Paul Edwards was a surprise British finalist in 10th which remains Britain’s best ever result in the event.

Gunthor was a disappointing fourth in the 1992 Olympics but bounced back to win his third world gold in Stuttgart in 1993 but he had a better contest from his opponents than he’d had in Japan. This time he opened with a huge 21.97m though world record-holder Randy Barnes, who was returning from a two-year doping ban, twice went out to 21.80m to take second.

In 1995 in Gothenburg, the distances were down with John Godina, who had qualified for the discus final earlier in the day, winning easily with a 21.47m opener with Barnes in third.

In 1997, Godina was only fourth in the US trials, but got a wild card invitation from the IAAF to Athens as defending champion. He had a consistent series with five throws between 21.19m and 21.44m and thought he was second to Aleksandr Bagach’s 21.47m until five days later it was announced the Ukrainian was disqualified for a doping offence. Mark Proctor, who generally didn’t have a good major Games record, came close to the final with his 19.63m falling 20cm short of qualifying.

Godina could only finish a poor seventh in Seville in 1999 and it looked like the 1997 silver medallist Oliver-Sven Buder would win after a 21.42m throw in the fourth round. However, CJ Hunter set a PB of 21.79m to give America their third successive gold.

Godina was back to form in Edmonton in 2001 and the American opened with throws of 21.87m and 21.80m to take gold from his team-mate Adam Nelson.

Andrey Mikhnevich was initially tenth in Canada but was then disqualified for two years and sadly he returned for Paris in 2003 and took gold easily with 21.69m. Nelson was again second and Godina dropped to eighth.

Godina was seemingly in good form for Helsinki in 2005 having set a world-leading 22.20 earlier in the season but in Finland, he failed to qualify for the final. The USA still won gold though as Nelson won easily opening with 21.73m and having a 21.68m as back up. Carl Myerscough initially finished 12th and last, but did manage a 20 metre throw in qualifying. He gained a place though when in 2013, the 2004 Olympic champion Yuriy Belonog’s sample was retested and he was retrospectively disqualified.

American domination continued in Osaka in 2007 when it was Reese Hoffa’s turn to win gold. Opening with 21.81m, he improved to 22.04m and had the best four throws of the competition. Nelson won his fourth successive medal as he took silver with Mikhnevich winning bronze for Belarus.

Hoffa was back for Berlin in 2009 but he could only finish fourth as the 2005 champion Christian Cantwell kept the USA in gold position. He opened with 21.54m but lost the lead to Olympic champion Tomasz Majewski’s 21.68m fourth round and then the Pole improved to 21.91m in the fifth but Cantwell responded with a 22.03m to take gold.

Myerscough achieved a British World Championships best of 20.17m in qualifying and ended up 11th again in the final with a disappointing 18.42m.

American domination ended in Berlin as Cantwell and Hoffa could only finish fourth and fifth, with Ryan Whiting seventh and Nelson eighth. The 21-year-old David Storl surprised in qualifying with a PB 21.50m and the young German took the lead with 21.60m in the second round.

The world leader Dylan Armstrong of Canada narrowly edged into the lead in the fourth round with a 21.64m throw. Storl though responded with his third PB in Korea with a 21.78m final throw to snatch gold and become the youngest ever champion.

In Moscow in 2013, Storl, who just lost out on gold in the 2012 Olympics, showed his competitive spirit as he again came from behind to throw 21.73m in the fourth round to retain his title. Whiting improved to take American silver thanks to a 21.57m opener with Armstrong taking bronze. Hoffa finished fourth and double Olympic champion Majewski could only finish sixth.