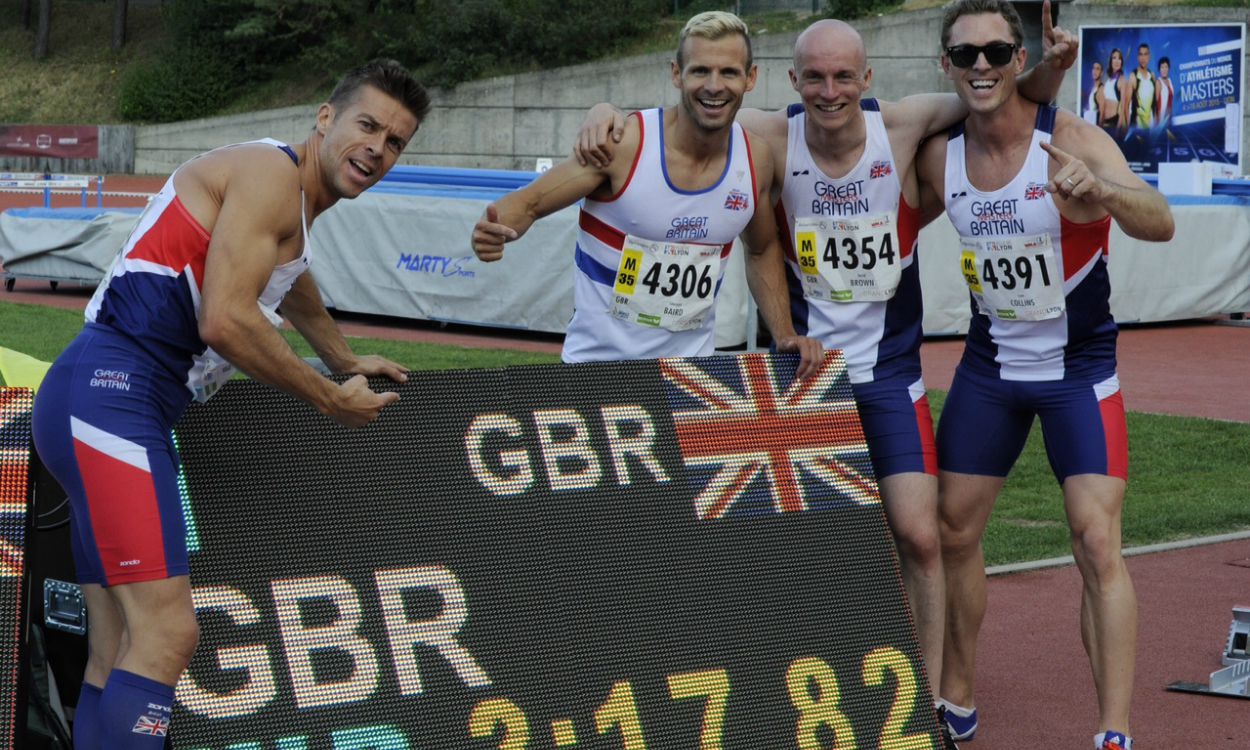 Britain had a mostly successful time in the relays on the last day of competition at the World Masters Championships in Lyon.

Not all results had been verified at the time of publishing this report, but it appears Britain will finish fourth in the medal table behind Germany, France and USA. At the last count Britain had 47 golds and 126 medals.

With the three individual medallists in the team it was no surprise that Britain’s M35 team won 4x400m gold in the very last event of almost two weeks of competition.

With four legs of inside 50 seconds, they not only won but also broke the world record with 3:17.82, six seconds up on the French team.

With a big lead even before world record holder Caroline Powell took over, the W60 victory was also predictable but they too broke the world record with 4:49.59.

The M60 team, led off spectacularly by photographer Tom Phillips and anchored by triple sprint champion Steve Peters, wasn’t far from the world record as they won in 48.75.

There were big hopes in the 4x400m too as Peters took off with a clear lead on the final leg but while it seemed he was on his way to a fifth gold, he was clearly struggling with an Achilles problem that has been hampering him all week. He was caught by the German team 100 metres out and when he tried to respond, his Achilles gave way and he fell to the ground.

There was also drama in the W50 long relay. Silver medallist Virginia Mitchell was well clear on the final leg when she came to a halt 200 metres from the finish as she felt her calf tighten. It was a precautionary stop as she is running the masters 400m in Beijing at the World Championships.

Trinidad’s W35 team set a world record in the sprint relay with 47.65 as Britain came third.

Britain also picked up a bronze in an exciting W55 4x400m losing the lead in the final 50 metres but the team made no mistake in the W55 sprint relay, winning comfortably in 56.16.

Britain’s M35 and M50 4x100m teams finished third as did the M40 team which should have been higher but a poor changeover midway scuppered the chance of a triple gold for Nengi Ossai.

Angela Copson won her sixth and seventh medals of the championships as she won bronzes in both relays while Ros Tabor won her sixth in the W65 4x400m.

Gerd Mueller of Germany won his sixth and seventh golds in the relays which he capped with a flying leg in the M75 4x400m to ensure Germany smashed the world record.

In the 2000m steeplechase, the top British result came from W35 1500m medallist Jo Locker, who won easily after setting a furious early pace in 7:13.31.

Jane Pidgeon improved her own British W50 record in third with 8:08.68.

Benoit Dunet of the home nation won the half-marathon in 69:10.

Martin Ford (1:30:07) and Peter Giles (1:32:48) picked up silver and bronze medals in the M70 class behind Switzerland’s Albert Anderegg’s world record of 1:25:11 and they picked up the team gold with John Morris in fourth.

Geraldine Simbola was first woman in the half-marathon in 1:19:11 though W55 Silke Schmidt’s 1:20:06 was the better performance especially as the German had been dominant all the track too.

Claire Donald finished second to Schmidt in 1:27:12 but led Britain to an easy team win.

» A round-up of the first few days of action can be found here, while further results, including Anthony Whiteman’s 800m win, can be found in a report here. There are details of world record-breaking performance by Glyn Sutton and Caroline Powell in a round-up report here. News of 800/1500m doubles by David Heath, Whiteman and Louise Rudd is here, while a report of the penultimate day of action is here.