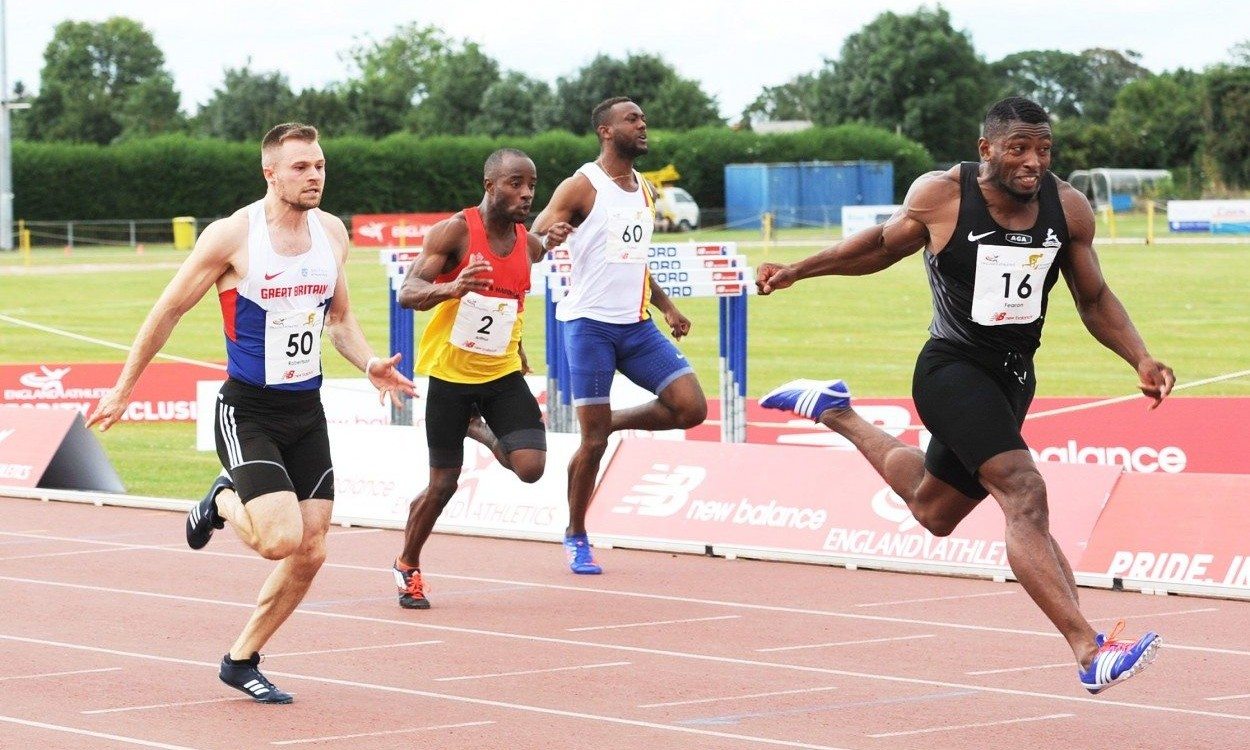 Joel Fearon won’t be going to the Rio Olympics but he can watch on TV comforted in the knowledge that he is Britain’s No.1 and now joint-third fastest man ever over 100m as he stormed his way to the England Athletics Championships 100m title in 9.96.

Fearon, an Olympian in his own right after donning the GB jersey at the Sochi Winter Olympics as part of the four-man bobsleigh team who finished fifth, clocked a shock new personal best of 10.04 at a low-key meet in Loughborough two weeks ago – briefly going top of the UK 2016 list before Richard Kilty overtook him with a 10.01 later that day – and proved that was no fluke with three impressive runs at the Bedford International Stadium.

The 27-year-old Fearon wasn’t even the athlete who stood out the most from his heat, despite running a wind-assisted 10.02, as 20-year-old Reece Prescod flew to a huge PB of 10.04 in the opening heat before ending his competition there.

Despite having competed twice previously, winning his semi-final at a canter in 10.10, the Birchfield powerhouse showed no signs of fatigue as he was pushed hard in the opening 50 metres by Andrew Robertson, who finished second in a season’s best of 10.15, before opening up a big gap and stopping the infield clock at 9.98 in perfect 2.0m/sec conditions – coaxing an audible gasp from the crowd – which was eventually rounded down.

The time puts Fearon level with CJ Ujah on the British all-time list, behind Olympic and world champion Linford Christie (9.87) and his own brother-in-law James Dasaolu (9.91).

Just moments before Fearon’s breathtaking performance, Rachel Johncock capped off a good week for herself in the women’s 100m, running 11.37 in 3.3m/sec conditions.

Having missed the entirety of the 2015 outdoor season through injury the Welsh international looked to be back somewhere near her best as she claimed her first England senior title to add to the silver medal from the Welsh Championships back in June.

Earlier in the day 21-year-old Sophie Papps lowered her personal best to 11.27, improving on the 11.31 from last month run at the same venue, but was a no-show for the final.

David Omoregie continued to build on the form he’s shown in the 110m hurdles since missing out on Rio selection, running a clean race up to the final three barriers and coming home with a 13.37 time with a 2.7m/sec wind to get the better of Khai Riley-La Borde.

World junior finalist Harry Hughes produced a 74.40m throw in just the first round of the javelin – his second furthest ever – to get the better of Joe Dunderdale whose best effort left him 12 centimetres shy of 70 metres.

Pre-event triple jump favourite Nathan Douglas was clearly struggling and took only his first three jumps, with a best of 15.50m, to get himself bronze behind Jonathan Sawyers (15.51m) in second and Ben Williams (16.07m) who won gold, despite registering just one jump.

Tom Horton in the 3000m steeplechase was untroubled on his way to winning his first English title in just his second serious year of competitive running, adding to his British Universities silver from the start of the season.

» See the August 4 edition of AW magazine for further coverage