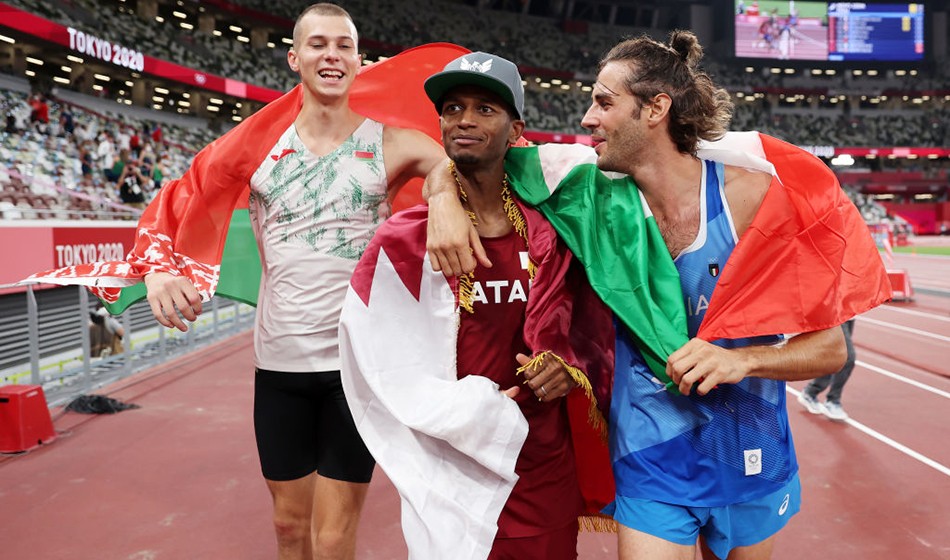 It was a brilliant Olympic high jump competition as three athletes cleared 2.37m for the first time in the history of the Games.

The biggest news, though, was that great friends Mutaz Essa Barshim and Gianmarco Tamberi decided against a jump off and settled for a share of the gold medal which disappointed some who believe there should only be one winner in the Olympics and athletes should fight to the end.

It’s not unique, however, as pole vaulters Edward Cook and Alfred Gilbert shared gold in London in 1908 and there were shared silvers in the 1896 and 1908 high jump and shared bronzes in 1992 and 2012.

For Tamberi it completed a sensational day for Italy, who also won the blue riband 100m gold and Tamberi greeted and embraced winner Marcell Jacobs as he finished. It was a summer that has seen Italy also win the European football tournament and Eurovision Song Contest!

An astonishing moment earlier on in the men's high jump as both Gianmarco Tamberi and Mutaz Essa Barshim shook hands and shared gold.

As for the actual competition, 10 athletes cleared 2.19m first time with Naoto Tobe and Maksim Nedasekau going over the second time as world champion Barshim passed.

To the disappointment of the home nation, Tobe was the first to exit as 2.27m was beyond him. Hamish Kerr and JuVaughan Harrison did their long-term plans in the final no assistance as they only got over at the third attempt.

Nine athletes now had a perfect record as the bar moved up to 2.30m.

Barshim easily cleared that height and he was joined on first-time clearances by Korean Woo Sang-Hyeok and Commonwealth champion Brandon Starc of Australia.

Django Lovett, defending Derek Drouin’s title for Canada from 2016, also went over as did the flamboyant Italian Tamberi, who was sadly denied a chance in Rio when he got badly injured in his final competition.

Harrison, who has also qualified for the long jump final, hit the bar hard with his second attempt but survived and was sitting ninth as the bar was raised and Kerr had a good third attempt to move into 1oth.

British representative Tom Gale had a poor first and second jump but came closer in the third and ended up 11th as McEwen and Kerr also exited at 2.30m.

The high quality continued as the bar went to 2.33m as Barshim and Tamberi maintained their 100% record. Nedasekau went into third with a first-time clearance, Woo into fourth with a second time clearance. Akimenko and Harrison made it on their second and Starc in the third.

Seven athletes were still in the contest at 2.35m and yet again Barshim and Tamberi could not be separated and retained the gold medal position with great clearances. Nedasekau though failed his first attempt and lost his bronze position as Woo cleared a Korean record 2.35m at the first attempt while Starc also cleared it.

Nedasekau passed his second attempt while Harrison moved up to the higher height as even a first-time clearance would have left him out of the medal positions.

It meant seven athletes were still in contention as the bar went all the way up to 2.37m.

Barshim and Tamberi were on a roll and both cleared their season’s bests to stay in gold medal position and equal the world lead with their first jumps and Nedasekau regained third as she also went over at the first attempt to equal his Belarus record.

Akimenko who had failed twice at 2.35m, failed his one attempt at 2.37m while  Woo and Starc failed their opening jump and moved up to 2.39m for their last two attempts.
It meant six athletes were now jumping 2.39m but in 15 attempts, no one cleared it and so it meant it was as you were with Barshim and Tamberi inseparable and Nedasekau third.

With nothing to gain but a gold medal to lose it did not seem to take long for the two leaders to decide on a joint gold. It meant Barshim, who shared third in 2012 and took silver in 2016, completed his medal set.

Tamberi, only eighth in Doha, had previously won golds at the European indoor and outdoors and world indoors but here he got his first global outdoor medal of any sort at the fifth attempt.

Tamberi said: “This night is memorable. We make our dream come true. We are Olympic champions together. It’s means everything to me. I put my life on this. I was crying watching these guys in 2016 and it was so frustrating back then.”

Barshim said: “I am really happy and relieved and now I have won everything. It’s unreal. In Championships, you’ve got in to be in your right focus and 110% focussed. I am proud of myself. ”

Gale enjoyed the rest of the competition in the knowledge he had done well to make his first global final in what was only his third competition in 18 months due to a knee operation.

The Briton said: “As a competition it’s the second best Olympic final I’ve ever seen behind 1992 Barcelona. It was absolutely fantastic and to be able to watch that and see two phenomenal guys share the gold.

“Barshim is somebody I’ve looked up to for a long time. I got into the sport when he was in his golden peak jumping 2.40 like it was nothing and Tamberi is a phenomenal guy. He’s had such a hard journey and he loves the sport more than anyone, he’s kinder than any one of us in the event, so if I was going to choose two people to win, it would be one of those two, and to see them share it is fantastic.”

He added: “It’s just frustrating, I’m in really good shape, I did everything I could to be in the best shape possible and I feel like I let my family down, let my team down, my body just failed me a little bit.

“I had a knee operation last year, my knee is in agony, I can’t go up and down stairs right now, I rolled my ankle on my second jump. I did everything I could to get in shape but I just couldn’t do enough.

“I’m going to go to the next Olympics and I don’t want to sit there and watch a competition like that ever again and not be part of it. Hopefully I can come out next time and be one of the ones on the podium.”