Sprint golds for Britain at the Euro U20 Champs 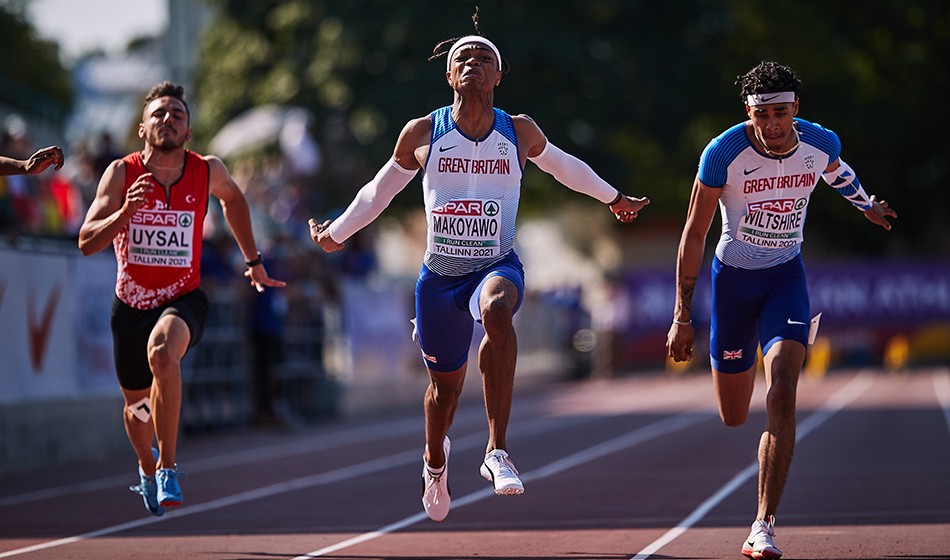 Toby Makoyawo and Edward Faulds struck European under-20 gold for Britain in the men’s 100m and 400m in Estonia on Friday (July 16) while Irish sprinter Rhasidat Adeleke took the women’s 100m title.

Makoyawo said: “This has been my aim the whole season, just to get in this place after all those hard sessions and hard reps, it all matters when something like this happens. I’m just happy!

Faulds ran his second personal best in two days to win 400m gold in 45.72 ahead of Italian Lorenzo Benati as GB team-mate Charlie Carvell, 17, was fourth in 46.84.

Another gold medal for Great Britain 🥇

Faulds said: “It’s pretty cool, isn’t it? It’s not every day you get an under-20 athlete saying they’ve run under 46 seconds twice. I’ve got another year in U20, there is a lot more to come. Let’s see what I can do.

“Around 150m I was thinking ‘this is my medal; they are not taking this from me’. I was willing to give my absolute everything and I’m glad I did. I might be in pain now, but it was fully worth it.”

In third, Joy Eze made the podium for Britain as she clocked a PB of 11.44 to edge out Switzerland’s Melissa Gutschmidt.

What a moment for Irish sprinting 🇮🇪

Poland’s Kornelia Lesiewicz took the women’s 400m in 52.46 as Britain won another medal courtesy of Mary John, who clocked 53.06 for silver.

A competitive women’s triple jump final was won by Sweden’s Maja Askag with of 14.05m. Just missing out on the medals by 3cm was Britain’s Temi Ojora after a best jump of 13.59m.

Saga Vanninen of Finland took gold in the heptathlon by an emphatic margin with 6271. Abigail Pawlett of Britain was seventh with 5593.

Violeta Ignatyeva won the women’s discus as an authorised neutral athlete with a best of 58.65m as Britain’s Samantha Calloway threw 49.87m.

The championships had opened on Thursday (July 15) with authorised neutral athlete Yuliya Khalilova taking the women’s 10,000m race walk in 46.14.21.

All eyes were on the men’s shot put, too, where Muhamet Ramadani took a rare medal for Kosova with gold with 19.92m.