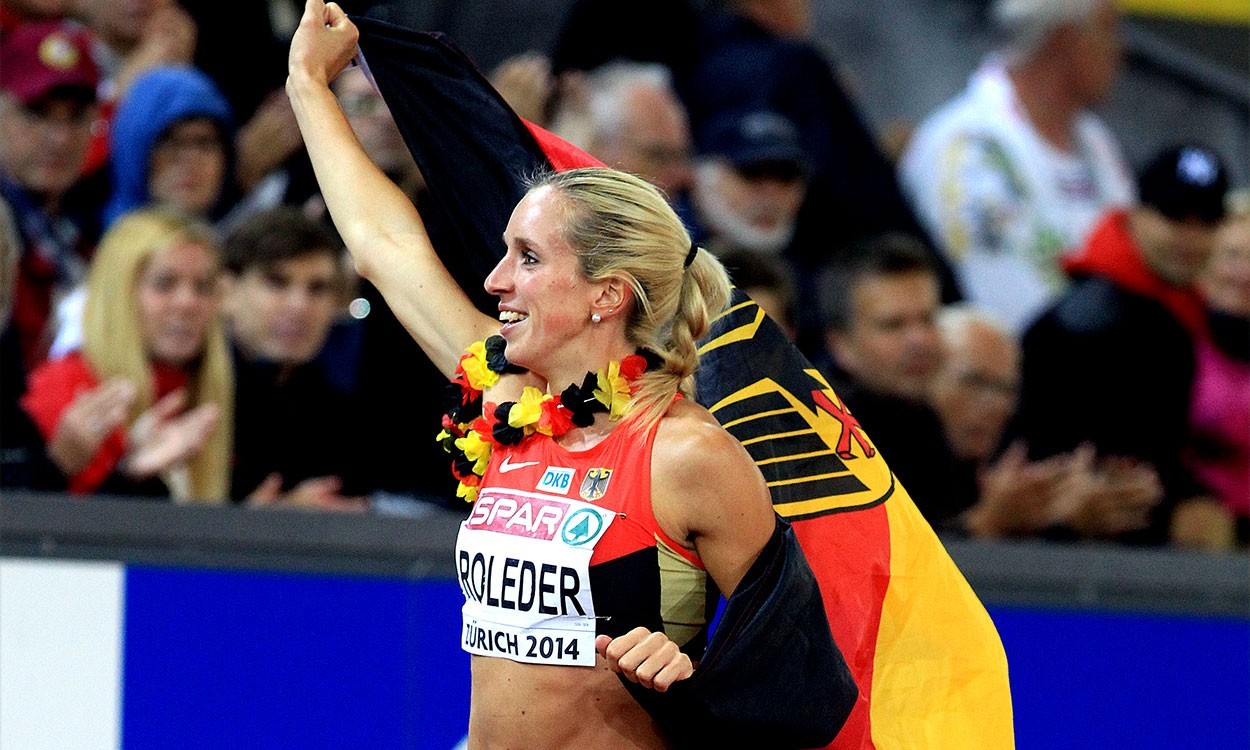 Despite just missing out on world 100m hurdles gold, Germany’s latest star was delighted with her run in Beijing, says Michael Butcher

If the women’s high hurdles final had been 101 metres instead of the regulation distance, Cindy Roleder would now be world champion.

The men’s race had already seen one European, Sergey Shubenkov of Russia, eclipse the Americans at their own game. In the women’s final there was similar devastation for the much-touted USA and, while the race was won by Jamaican Danielle Williams, Roleder was a mere 0.02 behind as she closed like the proverbial train shooting from fifth to second place with Belarus’s Alina Talay in her wake.

Interestingly, it was Britain’s Tiffany Porter on her left in lane six whom Roleder initially set her sights on as she went down to her blocks. Porter had beaten her to the line in the semis. “I knew I had to stay with Tiffany,” she said. “From then on I knew my strength lay in my technique.”

She can say that again. She delivered the perfect race – almost, setting a personal best (12.59) by two tenths of a second over the record she had set in her semi. “I got a super start, a dream run, the run of my life,” she said. “My strength is my finish.”

“I got a super start, a dream run, the run of my life. My strength is my finish”

Her reward was the silver medal, the high point of her career to date and Germany’s first sprint hurdles medal at this level for 28 years. Her performance easily outdid her bronze from the European Championships last summer. What did she put this upsurge in her fortunes down to?

Interestingly, like Dafne Schippers, she cites her heptathlon training as key. She said: “It seems as though it helps. It is after all a many-sided discipline. Throwing, running, even the shot involves a combination of speed and strength training. It is not for everyone but it works for me.”

So she has every intention of continuing with the heptathlon, in which she has a PB of 6055, next year as preparation for the hurdles in Rio.

Apart from the bonfire of the calamities for the Americans, other circumstances played in her favour, the wind reading for one.

“A headwind is always better for me because I am a big athlete,” said the 1.78m tall, 68kg athlete. “With a tailwind I get too close to the hurdles. The heat helped as well, as it does with all sprinters.” Like many a competitor in Beijing she also felt the track to be “mega fast”.

She also reverted to her original stride pattern to the first hurdle, increasing it from seven to eight steps – or rather she was persuaded to change it. “Once I could get it into my thick head,” as she graphically explained to German athletics magazine Leichtathletik.

“A headwind is always better for me because I am a big athlete. With a tailwind I get too close to the hurdles”

The man responsible for that decision was national coach, Idriss Gonschinska, who was responsible for introducing Roleder to the hurdles. She said: “He played a big part laying down the groundwork for my career.”

The good work was continued by Jan May and her current coach, who has done the fine tuning, Wolfgang Kuehne.

“I don’t know what his secret is,” explained a bemused Roleder. “But he gets all his athletes top fit at the right time. He is a super coach.”

However, it was not all good news for Roleder after the Beijing final. To take the edge off the euphoria, there was an incident caught on camera that sat badly with the Jamaicans. Inevitably it led to a predictable storm on social media.

Clearly stunned at her medal as the result came up on the big screen, Roleder headed for the bronze winner Talay to share their mutual amazement at what had just happened. In passing, the sister of the winner, Shermaine Williams, who finished last, tried to congratulate the German, but was barely noticed.

Roleder admitted it did not look good when she watched the video of the incident but insisted the apparent snub was not intentional.

“I have apologised on my Facebook page but at that moment I was not even aware of Shermaine,” she said. “I was just on my way to congratulate my friend Alina Talay on her bronze medal as everyone can see on the video.”

The national coach was far less forgiving than his athlete for the outcry. “This once again shows how quickly a storm can blow up on Facebook,” he said. “Anything can be made public without any filtering or research. Even racism was mentioned, which for me is a totally unacceptable accusation.”

The fact remains that the policewoman from Leipzig in the east of the country became in Beijing this summer the first German athlete since 1987 to collect a sprint hurdles medal at a world championships. In a nice symmetry, the silver and bronze medals in Rome more than a generation ago went to two athletes from the now defunct GDR, Gloria Siebert and Cornelia Oschkenat.