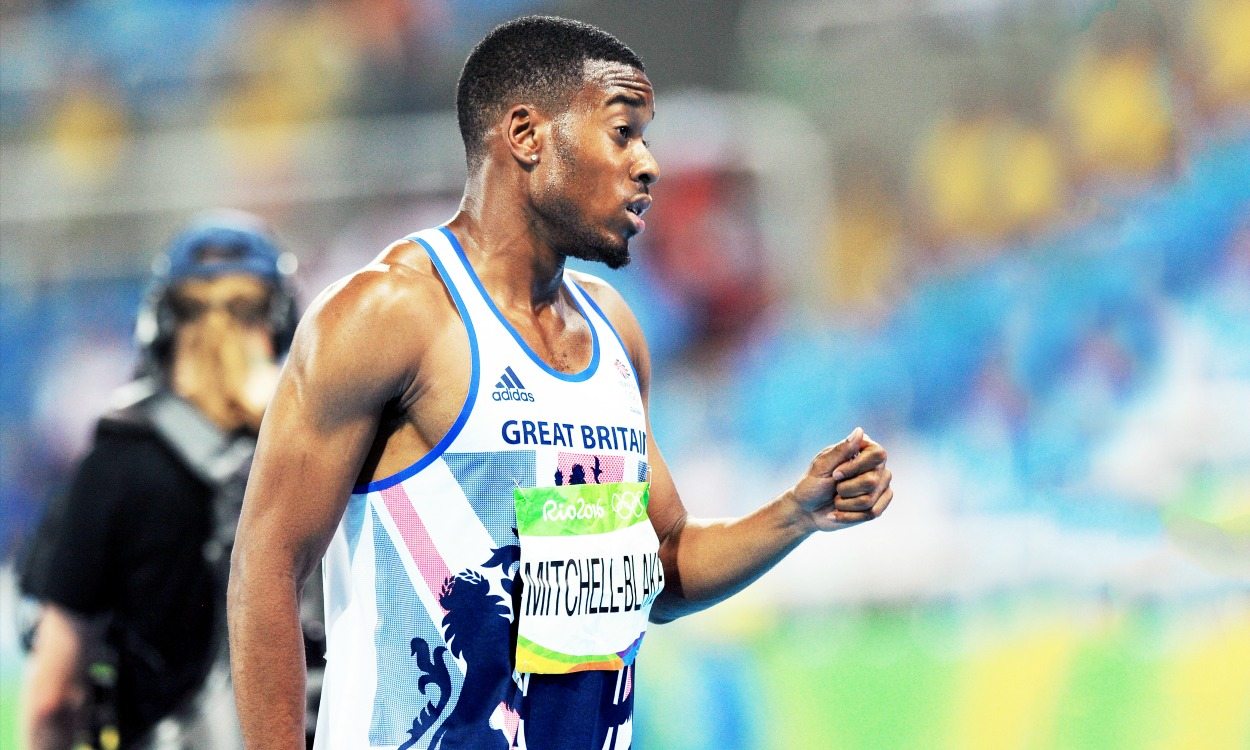 As many of Britain’s athletes return to training, Nethaneel Mitchell-Blake, for the first time in a decade, is still enjoying an extended break on British shores.

It’s not easy to pick a high in a year where the 22-year-old Louisiana State University student clocked his first ever sub-20 second time over the half-lap, storming out of the blue to a 19.95 back in May, made his first British senior team at the European Championships less than two months later and, finally, reached the semi-finals of an Olympic Games.

“You’ve got to put things in perspective. In hindsight I’m definitely happy with what I achieved coming back this year and doing what I’ve done,” he says. “But there’s also more work to be done. I’m excited about getting better and hopefully this can be a stepping stone to greater things.”

But at some point along the way each up has come with its own personal down. His British senior debut, off the back of more than a month out of competition, saw him clock a disappointing 20.60 in the European final – his slowest in 2016.

A micro-tear in his hamstring just 10 days before his heat in Rio set him back some after a progressive build-up since Amsterdam. But for Mitchell-Blake, who looked favourite to pick up prestigious titles at his last National Collegiate Athletic Association (NCAA) Track & Field Championship – the NCAAs – the low-blow of tearing his hamstring on the final day of competition was as brutal as they come.

“I cried. It was heart-breaking,” Mitchell-Blake confesses. “I ran pretty much every week before that. My motivation was always that I have one more week to get better. After I ran 19.95, yes I was happy but as soon as I went to the drawing board it was about getting better. Every week I was so focused on getting better.

“The NCAAs is the end of the collegiate year. That’s what you train for. If you run 19.95 it means nothing if you’re unable to win the title. Although I had beaten the competition in different meets and even the day beforehand, no one really remembers that. People only remember the winner.

“I felt like I was in great shape. I ran the heats comfortably, tried to conserve energy as well as I could. For the championships I wanted to do well for the team. I have a great relationship with my coach [Dennis Shaver] who has invested a lot of time and energy in me. I felt like I was doing it for the team collectively.

“It didn’t come to fruition. To know I did everything I could physically and mentally to prepare myself, it was hard to deal with. Especially after I pulled up and went into the stands to watch the races being won.”

But he doesn’t let the disappointment fester. Every experience, no matter how big or small, good or bad for Mitchell-Blake, is something from which he is eager to learn.

In a team environment he went in the space of barely a month from a reliable points-gathering, race-winning phenom on the track for Louisiana State to the new kid on the block and one of a number of international-class sprinters working towards one solitary goal.

“In college we’re all equals but a lot of pressure was put on me to score certain points. I know some of the young guys may have looked up to me as well. But as the pros we’re all on the same level because we’re all trying to do our own thing,” he says.

“Adam Gemili was a superb captain [in Rio]. Although we’re the same age this was his second Olympics so he’s a whole cycle ahead of me. His experience definitely showed. He took me under his wing and mentored everybody. I really learned a lot with him.

“Being in an apartment with the likes of Harry [Aikines-Aryeetey], Richard [Kilty], James [Ellington], CJ [Ujah] – a bunch of lads who have been on the scene a while – I was continuously learning and really keen to learn from them.”

Mitchell-Blake’s detachment geographically hasn’t led to him becoming disconnected from British athletics. Three years ago he won European junior 200m gold, beating Matthew Hudson-Smith on the way while also part of the same team as Ujah, Dina Asher-Smith, Desiree Henry and Jazmin Sawyers; all of whom Mitchell-Blake joined in Rio as Olympic debutants.

“Never limit yourself. That’s how I came into this year. I didn’t have any limits. I worked hard and just wanted to get better”

When he made waves in the spring with his sub-20 run athletes such as Gemili, who Mitchell-Blake had never previously had contact with, reached out to him to offer their congratulations and he met up with Kilty in Loughborough later in the summer. He was becoming part of a group before he knew it.

“I’ve got the utmost respect for them and I’m glad I was put in an environment like that. It can be a hard transition but they made it as easy for me as possible,” he says. “They were all really supportive. You prepare for your own race but also motivate others. That’s exactly what it was.

“They would stay focused and we all fed off each other. There was a lot of positive energy within the camp and we kept motivating each other. It was a calm environment and everyone gave credit where credit was due.”

Even in the wake of the catalogue of experiences and emotions, Mitchell-Blake can pick out the most important lesson taken from them all. “Never limit yourself. That’s how I came into this year. I didn’t have any limits. I worked hard and just wanted to get better,” he adds, without hesitation.

“I’ve found what motivates me. Everyone has their niche and knows different things which triggers them. I think I’ve found what fires me. That’s the biggest thing I can say. Coming into the next season, I know what works for me now and hopefully I can continue that.

“I’m really, really excited about next year and what I can potentially do to get where I want to go. It’s an exciting time to know that I can get better.”

He has just two classes before graduating from college, but 2016 has taught Mitchell-Blake more than any lectures can.