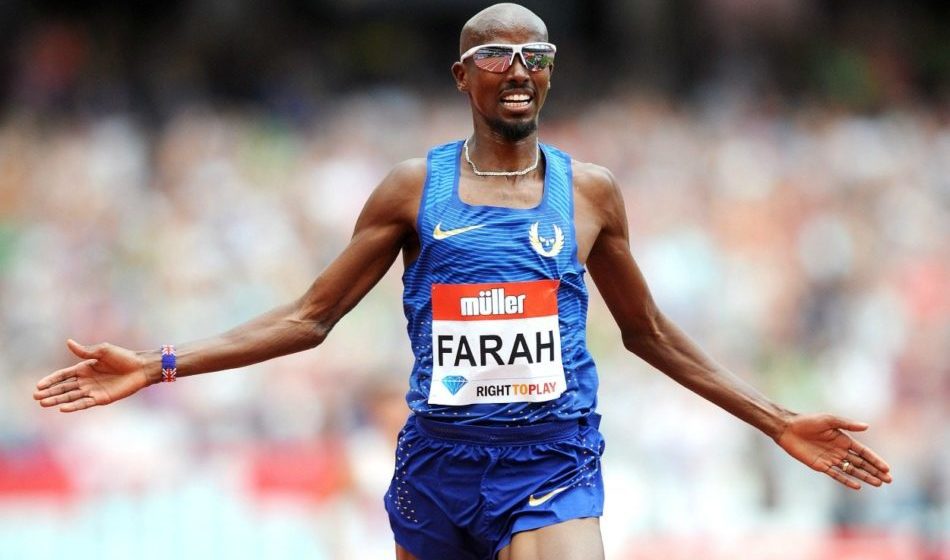 Mo Farah was the master of all he surveyed at London’s Olympic Stadium, proving his preparations for Rio are firmly on track with a stunning 5000m victory to round off the Müller Anniversary Games on Saturday (July 23).

With the Usain Bolt circus back in town and Laura Muir in record-breaking form, it had looked like day one of this remarkable athletics weekend would take some beating.

But Farah and this venue tend to produce sporting theatre of the highest quality and so it proved again as the double Olympic and world champion raised the roof with a world-leading time of 12:59.29.

The last time he raced over 5000m at the east London venue during an Olympic year – as an historic golden double was secured four years ago – the crowd noise hit levels loud enough to distort the photo finish equipment. It didn’t get quite to that scale this time around but the fans were on their feet again as they roared their favourite on in what became a straight race between Farah and the clock.

A blistering finale saw the 33-year-old just break the 13-minute mark and send him off for his final Olympic preparations with the biggest of springs in his step.

Also hugely impressive was Andrew Butchart, who has had a year to remember due to Rio qualification and breaking the long-standing Scottish 5000m record. He responded to this occasion too with second place in 13:14.85, just outside his national mark. His final lap of 56.6 seconds was actually quicker than Farah’s closing 400m. Bernard Lagat was third in a world masters record time of 13:14.96.

“Training is going well, everything is going well,” said Farah. “I tried today and it’s nice to go straight to the front, follow the pacemakers and see what I could do. I came away with under 13 minutes, which is a decent time.”

He added: “Anything can happen now until Rio. I just have to keep my feet on the ground, keep doing what I’m doing. I love the crowd, love the people. I enjoy what I do. If I didn’t enjoy what I do I wouldn’t run a decent time, be happy and smiling.”

Before the race, Farah had said: “Two weeks out from London 2012 I didn’t race but this track is special. I wanted a last big memory before Rio.” He certainly got his wish.

With Muir having broken Kelly Holmes’ British 1500m record in such fine style on Friday night, many among the crowd might have wondered if conditions were right for the current 800m mark of 1:56.21 – also held by the 2004 double Olympic champion – to come under serious threat.

The pacemaker was left to her own devices, however, and instead Shelayna Oskan-Clarke won a British battle with Lynsey Sharp to win in 1:59.46. Sharp was hot on her heels to pip American Molly Ludlow for second place in 1:59.54.

“It was great to win today,” said Oskan-Clarke. “This is probably the biggest win of my career. I ran the race well and timed it well at the end. I was in form a few weeks ago but it just takes me a while to get my form out. I am confident of the shape I am in and this is a stepping stone for me.”

In the men’s 400m, there was to be no celebratory Rio sign-off for Martyn Rooney. The twice European champion was a little too eager out of the blocks and was forced to watch from the sidelines as compatriot Matthew Hudson-Smith led the field home in 45.03.

He held off Trinidad and Tobago’s Deon Lendore (45.34), while home hope Rabah Yousif ran a season’s best for third in 45.45. Britain’s Delano Williams was eighth in 46.92.

“This race has been ideal for me,” said Hudson-Smith. “I needed to build some confidence and that’s exactly what I’ve done. I didn’t execute quite how I wanted to, but I’ll take the win. I wanted to get a time and put out a statement, now I’ve got to look towards Rio.”

There was encouragement, too, for Britain’s Jack Green. Following his disappointment in the European Championship final in Amsterdam earlier this month, after an error in his stride going into the first hurdle cost him dearly, the 24-year-old was content with a fifth-place finish in 48.99.

“I’m really pleased,” said Green, who seriously considered retirement just a couple of months ago. “Obviously the final in Amsterdam didn’t go to plan, so we tried a new stride pattern today and that was my third-fastest time ever. It was a perfect confidence-booster, I haven’t raced here since the Olympics so it’s a privilege to be back.”

Sebastian Rodger, who also has Rio very much on his mind, was sixth in 49.35 while Jacob Paul was ninth with 50.84.

In the women’s 3000m steeplechase, there were real injury concerns ahead of Rio for Briton Lennie Waite, who had to be helped off after being forced to pull up at around the halfway mark.

The 30-year-old immediately signalled for help after crumpling to the in-field turf. Tunisia’s Habiba Ghribi – crowned 2012 Olympic champion when Russia’s Yuliya Zaripova was stripped of the title – won the race in a season’s best of 9:21.35, with America’s Stephanie Garcia was second in 9:26.26 and Kenyan Purity Kirui third with 9:30.95.

» For further coverage of the Müller Anniversary Games, which incorporates the London leg of the Diamond League series, click here, and see the July 28 edition of AW magazine for 13 pages of reports, pictures and results from London