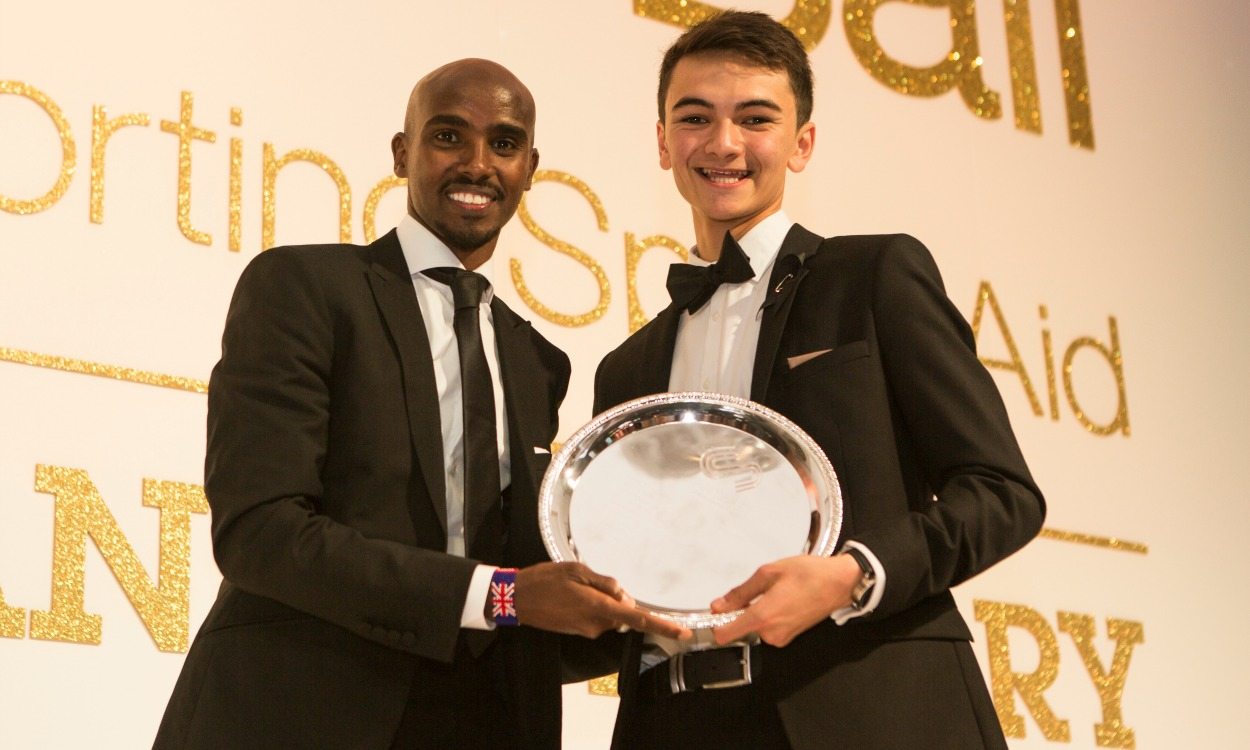 Mo Farah has shown his support for the next generation of British running talent by announcing plans for a donation of £50,000 to be made to SportsAid on behalf of the Mo Farah Foundation.

Details of the donation were revealed at SportsAid’s 40th anniversary SportsBall on Thursday evening. The national charity, which provides young British athletes with financial support and recognition as they start out in their sporting careers, will use Farah’s donation to specifically help track and endurance athletes.

Four-time Olympic and five-time world gold medallist Farah had been on stage to present SportsAid’s prestigious One-to-Watch Award to talented triathlete Alex Yee, who has also further impressed on the track and country in 2016.

The 18-year-old, who won junior gold at the ITU World Duathlon Championships and bronze at the Quarteira ETU Triathlon Junior European Cup, also won the Great Edinburgh XCountry International under-20 race in January and finished ninth in the 5000m at the IAAF World U20 Championships.

“It feels amazing – I’m speechless,” said Yee. “To be named the one to watch and then to be presented it [the award] by Mo Farah is the greatest honour and I’m over the moon.

“It’s surreal for Mo to praise my times,” added the teenager, who ran his 5000m PB of 13:52.01 at the World Juniors in Bydgoszcz and is currently faster over the distance than Farah was at the same age.

“To have his backing and the backing of such a great charity shows that it’s all going in the right direction. I’m ready for that next step and to push myself and hopefully in four years get to that Olympic Games.”

Yee received the award ahead of skeleton athlete Ashleigh Pittaway and swimmer Tom Derbyshire and, having been helped by SportsAid in 2013, 2014 and 2016 through the Dave Aitchison Fund, will now receive an additional £1250 in funding.

“It was great being able to present the One-to-Watch Award to Alex,” said Farah, who received a SportsAid award as a 16-year-old in 1999. “He clearly has a lot of potential both as a triathlete and particularly as a runner.

“As an athlete or ex-athlete, to see that help that SportsAid offer, helping the next generation and continuing to support them all the way to 2020, is invaluable. I remember my first time ever getting support from SportsAid, how big it was and how far it went so it’s important we see that.

“We have to recognise the hard work SportsAid do,” added the 33-year-old. “They’re very good at supporting and finding the next generation of athletes, like myself in the past.”

Sprinter Jodie Williams and heptathlete Morgan Lake are among the previous recipients of the One-to-Watch Award.

The 40th anniversary SportsBall was attended by over 500 guests, including more than 30 Olympians and Paralympians who had previously received SportsAid support, as the charity reflected on four decades of helping British athletes during the critical early stages of their careers, and celebrated the success in Rio this summer.