Mark Lewis-Francis on his bobsleigh goal 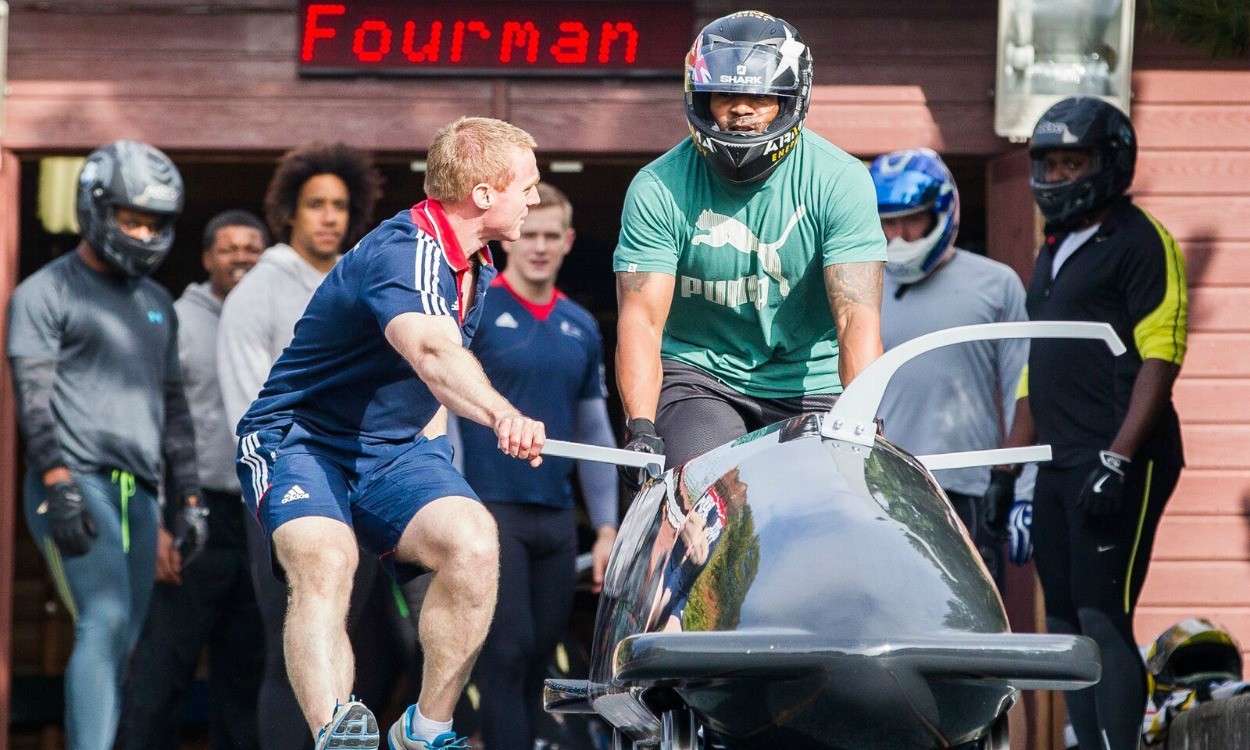 Simeon Williamson says you don’t know about bobsleigh until you are racing on ice at 75mph, head down, seeing nothing, and G-forces are trying to bend your body.

He’s been doing it for a year. Mark Lewis-Francis is the new rookie, currently stepping on to the ice for the first time with the Great Britain Bobsleigh team in Latvia.

Both have been world-class athletes, both have had serious injuries and both are now bobsledding their way to a new life.

“We have a scouting system. We know the type of athlete we require to make our bobsleigh go faster,” he says. “There aren’t many people who fit the model. We don’t have mass tests. We pretty much draw up a shopping list.

“You quickly find it comes to a list of maybe 10 people. We know where they live and we go and knock on their door. Simple as that.”

In Lewis-Francis’ case it was a text from former GB sprints coach Michael Khmel, who is now on the bobsleigh programme.

“From when I got the text off Michael to now, I’ve enjoyed every moment of it. It’s a new lease of life, a new challenge,” says Lewis-Francis.

“I’ve been doing athletics since the age of 13. It’s all I know. So going into bobsleigh I feel like a teenager, learning new skills, meeting new people.”

“I’ve been doing athletics since the age of 13. It’s all I know. So going into bobsleigh I feel like a teenager, learning new skills, meeting new people”

Lewis-Francis and Williamson are the bobsleigh muscle. They’ve got to get the machinery moving as quickly as they can then leap in and leave the rest to the driver. They are the push-starters.

Think of snow and ice in January and you are push-starting the car down a hill. Only you have to do it almost quicker than thinking about it.

Lewis-Francis has driven from his Birmingham home each weekend to the British Bobsleigh & Skeleton Association’s HQ at Bath University to learn the basics and now he’s doing it on ice for the first time in Latvia.

“I’m open minded and if I take a fall, as my mum used to say, you get back up and you try it again,” he says.

“I’ve always been a bit of a daredevil so nothing fazes me. If the ice is a bit challenging then I’ve got to man up, dust my shoulders off and try again.” 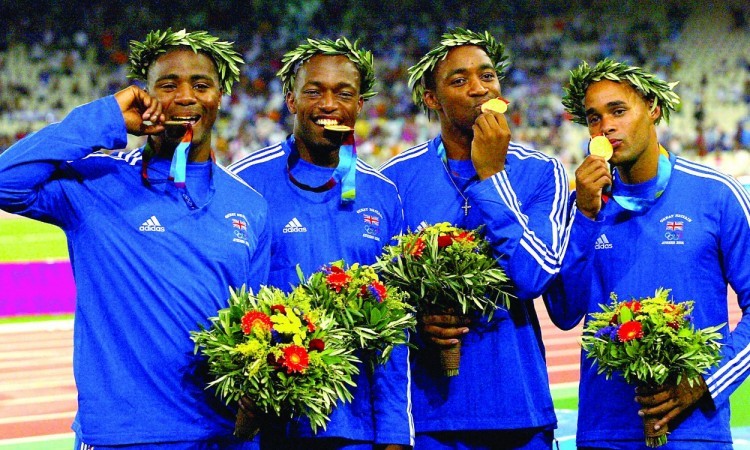 He hasn’t jumped into the sled yet – that will come in pre-season training in Europe in November and he could be making his racing debut by the end of that month.

“When I went down the track in a bobsleigh I never wanted to do it again,” warns Williamson.

“I will be honest with you. I went down, I came back, and I only went from maybe corner six, so you are not pushing, they just let you go, so we were actually going quite slow compared to when you actually push off.

“So I said ‘you know what? I’ll give it a go tomorrow and if I don’t like it I’ll just knock it on the head’. I went from corner six again and still didn’t like it but I said I wanted to go from the top. And I was ‘Oh my gosh that was all right!’”

So what has Lewis-Francis got to face? “It’s frightening,” Williamson admitted. “You jump in, your head’s down, you don’t see anything until you get to the bottom. I didn’t know what I was letting myself into. I wasn’t prepared for the G-forces either.

“It’s going to be an eye-opening experience for Mark to see if he’s well fitted to doing it. Knowing Mark, though, he’s a thrill-seeker anyway and this is definitely a thrill-seek.”

“If I can give them that extra push, excuse the pun, then I’m all up for it”

Williamson had two knee operations and was on the verge of going out of athletics and into teaching until bobsleigh knocked. Lewis-Francis had two Achilles tendon operations and the speed that once saw him do 100m in 9.97 only to be denied the world junior record by a faulty wind gauge has abandoned him.

“The reason Mark Lewis-Francis has come into the programme is that he wants to be a medal winner at a summer sport and a winter sport at an Olympic Games. Simple,” says Anderson, looking ahead to the 2018 Winter Olympics. “Same with Simeon. He wants to win an Olympic medal. That’s why he’s here. No other reason.”

Lewis-Francis puts his 2010 comeback from double surgery and silver medals at the European Championships and the Commonwealth Games that year as the peak of his achievements, higher than the magnificent Olympic relay gold of 2004.

“A lot of people wrote me off. For me that was my best moment in the sport,” he says.

Jason Gardener, another who converted to bobsleigh, was in that momentous British team that beat the USA. Craig Pickering, another bobsledder, is a contemporary.

“The main thing in bobsleigh is using my speed and power,” says Lewis-Francis. “It is scary, most definitely, because I don’t know what’s round the corner. I’m not in control of my ship if that makes sense to you. I’m not driving it.”

Bobsleigh is Britain’s most successful winter team sport, the nation finishing fifth in the four-man bob at the last three global championships and missing a medal at the Winter Olympics in Sochi last year by 0.11 seconds.

“If I can give them that extra push, excuse the pun, then I’m all up for it. It would be amazing to achieve another Olympic medal, and a world medal, in another sport,” says Lewis-Francis, who holds two athletics World Championships relay bronzes.

“I finished my season struggling from injuries this year and I got the text out the blue asking me if I’d be interested in bobsleigh and I kinda bit his hand off, you know? I was like, ‘yes, that’s perfect’. With the bobsleigh I’m medically looked after so that will help me throughout my athletics season as well. So it’s like a second chance.”

“With the bobsleigh I’m medically looked after so that will help me throughout my athletics season as well. So it’s like a second chance”

Lewis-Francis hasn’t given up on athletics, although it felt like it had given up on him this summer as he had no medical back-up and had to pay out of his own pocket to keep his body in shape.

That changes now via Lottery-funded bobsleigh and he is hoping to gatecrash the 4x100m relay team for the Rio Olympics next summer.

He said: “For these guys to have faith in me and believe I can go out there and do the bobsleigh team some justice, it gives me that fire burning inside again.

“I could have walked away from sport this year and not do sport ever again. For Michael to send me that text, I thank him. I feel privileged to have an opportunity to go to another major champs because that’s what I live for.

“I was born to be an athlete, I was born to compete, born to stand in front of a crowd, do my country proud. For me, I just feel really honoured to be in this situation.

“My kids are old enough to know what their dad’s achieved . My boy, Romeo, is 13 and has just started playing football for the local team. And I’ve got two little girls.

“He’s lived the journey with me, seen what I’ve gone through, the highs and the lows. Hopefully I can inspire him.

“It’s all about dreaming. My Olympic gold medal was a dream. And it came true. I go into schools to talk to the kids and that’s one of the main things I talk about.

“If you believe and you dream that you can, then you can. Most of these kids say, ‘I want to be just like you.’

“But I tell them, ‘don’t be like me, be better than me. ‘If you can give that message out then job done really.”