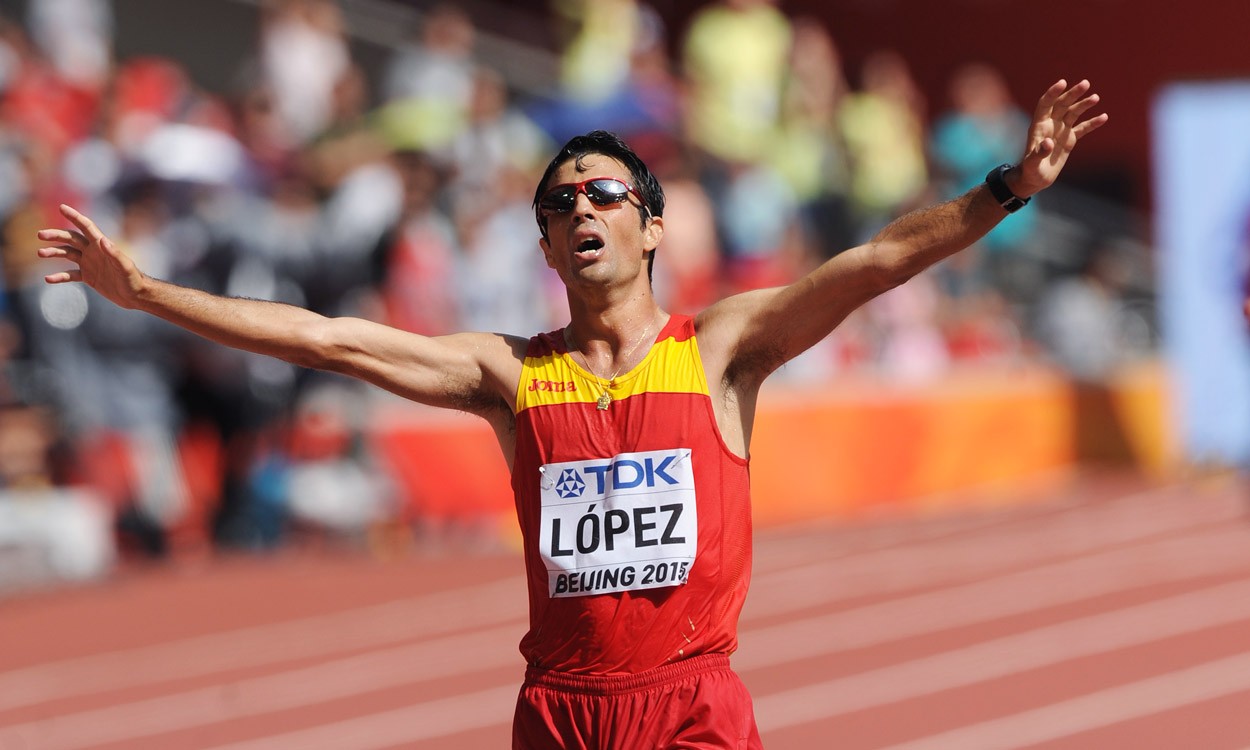 Wang entered Beijing’s Bird’s Nest stadium to big cheers but the Olympic bronze medallist was too far behind European champion Lopez who went on to cross the finish line in a 1:19:14 PB as Wang clocked 1:19:29.

Neither were threatened in the closing stages and Ben Thorne was a clear third, clocking 1:19:57 to break the Canadian record.

“This is the best moment in my life,” said Lopez, who picked up the bronze medal in Moscow two years ago. “The course was difficult and then there was the heat. It was a tactical race but I kept calm. I have worked very hard for this and I am so proud of it.”

The Chinese trio of Wang, Olympic champion Chen Ding and Cai Zelin were straight to the fore but it was Germany’s Hagen Pohle who was at the front at the 5km point, passing in 20:10.

Favourite Yusuke Suzuki of Japan, the world record-holder, completed more than half of the race but then dropped out and again it was the three Chinese walkers leading, though Lopez was close.

Wang then made a break but Lopez went with him. The Spaniard came through and then held on to get the gold.

Cai finished fifth, one place behind Igor Glavan of Ukraine, while Chen was ninth.

Britain’s Tom Bosworth, who broke the national 10km walk record earlier this year, clocked 1:23:58 for 25th and later said he was disappointed with his performance.

“Everything was going to plan, up until 14km.” he commented. “I’ve never dropped off so much. The pace was fast but I felt comfortable, I felt in control and I was heading for a massive PB. Then I guess the temperature rose in the latter stages.

“Having said that, I love the experience. I don’t feel out of place. This is where I’m meant to be and I will take it to Rio and the London 2017 Worlds in two years.”

Lopez said: “At 14km the race broke somehow and it was an important moment for the leading group. The last 200m (when he entered the stadium) was an incredible sensation. I remembered all the people who have helped me.”

Wang commented: “I was not too nervous, but I felt some pressure as this competition takes place in China. But I don’t think the pressure really affected me, I am quite happy with the result. Now I am going to take a break and hope to do well at the Olympic Games next year.”

Talking about his national record time, Thorne commented: “When I was getting ready for Beijing, I just told myself ‘it is going to be hard, let’s hope for a PB’ but at around 15km I started to think about the national record. I felt okay, some people had dropped off already, and the bronze medal was like a dream to me. Thinking about Rio next year, I will stay with the 20km but thinking of the 50km in the future, too.”

Martyn Rooney had been selected as GB captain, despite not initially being named for an individual event, but he successfully appealed the decision to only include him in the 4x400m relay squad. He made the most of his 400m place in the first round, running a PB in an incredible second heat. As Yousef Masrahi of Saudi Arabia clocked a 43.93 area record to win the race, Jamaica’s Rusheen McDonald ran a national record 43.93 behind him and Rooney’s PB of 44.45 came behind Isaac Makwala’s 44.19. World indoor champion Pavel Maslak clocked 45.16 but that was only enough for sixth and last place.

Despite being outside the top three needed to secure his spot in the semi-finals, Rooney progressed as the fastest loser and will be joined in the next round by team-mate Rabah Yousif, who won his heat in 45.24, plus the likes of Kirani James, Wayde van Niekerk and LaShawn Merritt. The third Briton in action, Jarryd Dunn, finished sixth in 45.49.

Rooney’s time moves him from eighth to fourth on the UK all-time list and is the quickest time ever run by a Briton in the event at the World Championships. His previous PB of 44.60 had also been set in the Bird’s Nest, at the 2008 Olympics.

Defending champion Zuzana Hejnova (54.55), four-time Diamond League champion Kaliese Spencer (55.03) and Denmark’s Sara Petersen (55.11), were among the winners of the 400m hurdles heats. Britain’s European champion Eilidh Child also safely progressed, finishing behind Hejnova in 54.74, while her team-mate Meghan Beesley ran a big PB of 54.52 when finishing third in her heat and third quickest overall to also secure her spot in the semi-finals.

The two favourites –  Joe Kovacs and David Storl – both threw over 21 metres to easily better the shot put qualification standard and will be joined in the final by athletes including Kovacs’ fellow Americans Reese Hoffa and Christian Cantwell, New Zealanders Tomas Walsh and Jacko Gill and Jamaica’s O’Dayne Richards.