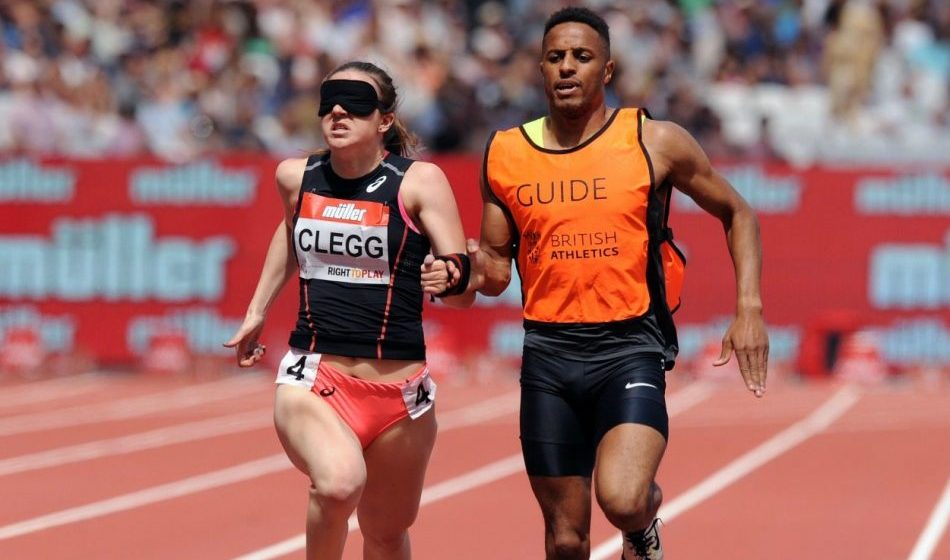 Libby Clegg stormed to victory in the T11/12 200m and showed impressive form ahead of the Paralympic Games as she clocked 24.44 to smash the world record with guide runner Chris Clarke at the Müller Anniversary Games on Saturday (July 23).

The five-time world T12 sprint medallist and two-time Paralympic silver medallist, who has recently been reclassified as a T11 runner which means she must now wear a blindfold, took 0.23 off a world record set by Brazil’s three-time Paralympic gold medallist Terezinha Guilhermina in 2012.

“I am absolutely gobsmacked at how I have performed, I can’t believe it,” said the 26-year-old. “I have been getting better and better with every race and I’m loving every minute of it so far.

“I have got high hopes for Rio and am feeling really positive about it. I am aware that most of my competition are Brazilian but I think it’ll be really exciting and I can’t wait to get there.”

Richard Whitehead had got the day off to a world record-breaking start as he took three tenths of a second off his T42 200m PB set earlier this year to cross the line in 23.03 at a meeting which incorporated the IPC Athletics Grand Prix Final.

The Paralympic champion and three-time world gold medallist, who turned 40 just a few days before, improved his own official world record of 23.46 ahead of the Rio Paralympic Games.

“I’m heavy in training at the moment so 23.03 is fine,” said Whitehead. “The goal is to go to Rio and put a solid 22 in. I still wanted to lower that world record today.”

South Africa’s Ntando Mahlangu clocked a 23.97 PB in second ahead of Whitehead’s fellow Briton David Henson, who has competed at the Invictus Games and claimed European silver behind Whitehead in Italy recently.

“It was a consistent run for me, which at this time of the year, in between the European Championships and Rio, that’s where I wanted to be,” said Henson, who clocked 25.05. “I knew this race was important and can’t wait for Rio. I made sure that I looked around and took it all in at the start, this place is unbelievable and I’m so pleased for Richard breaking the world record.”

Sophie Hahn was just outside her world record with a 12.66 meeting record in the T38 100m as fellow Briton Kadeena Cox clocked a 13.17 PB in second.

USA’s Jarryd Wallace and Britain’s Jonnie Peacock gave a taster of the battle to come at the Rio Games as the American clocked 10.80 to win the T43/44 100m ahead of reigning Paralympic champion Peacock with 10.87.

“It was good to be able to go up against a lot of good guys and be able to respond like that,” said Wallace. “The goal was to execute the race, there were one or two mistakes still in there.” 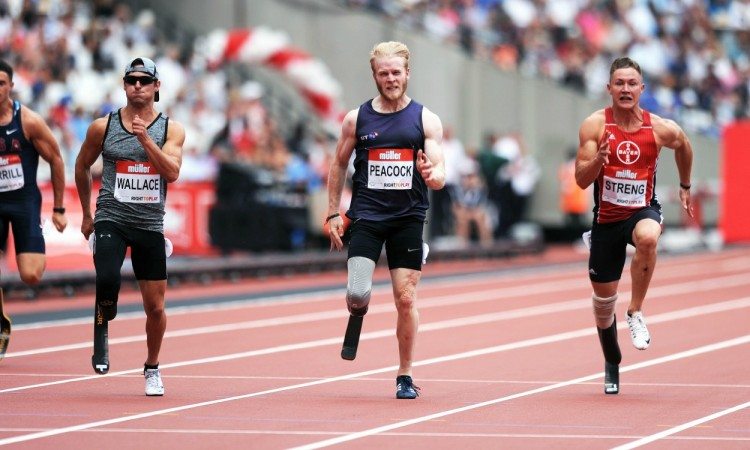 Germany’s Markus Rehm continued his long jump domination as he leapt a 7.96m meeting record for 1116 points to claim victory in the T42/44 event ahead of Japan’s Atsushi Yamamoto with a leap of 6.62m for 1009 points. Ronald Hertog of Netherlands was third with 7.13m for 1006 points.

Dutch sprinter Marlou van Rhijn came close to her own world record with 12.87 for victory in the T44 100m as Britain’s Sophie Kamlish clocked 13.35 in second to break the British record ahead of Laura Sugar with 13.61.

A drama-filled T54 1500m was won by Switzerland’s Marcel Hug as the seven-time world gold medallist clocked 3:19.73. Britain’s Richard Chiassaro, who made his international debut at the 2015 World Championships and recently claimed European 200m gold in Grosseto, held off six-time Paralympic champion David Weir to the runner-up spot – a 3:19.87 PB to 3:19.92.

Canada’s Brent Lakatos, a seven-time world gold medallist and three-time Paralympic silver medallist, had remained on the track after winning the T53 100m in a 14.31 meeting record to also contest the 1500m, but the Canadian was involved in a crash which also affected Kenny van Weeghel of Netherlands and neither athlete finished the race.

Although disappointed to have missed out on breaking her own world record of 17.31, double Paralympic champion Hannah Cockroft dominated the T34 100m, clocking 17.61 to break the meeting record ahead of her fellow Briton Kare Adenegan’s 18.72 PB.