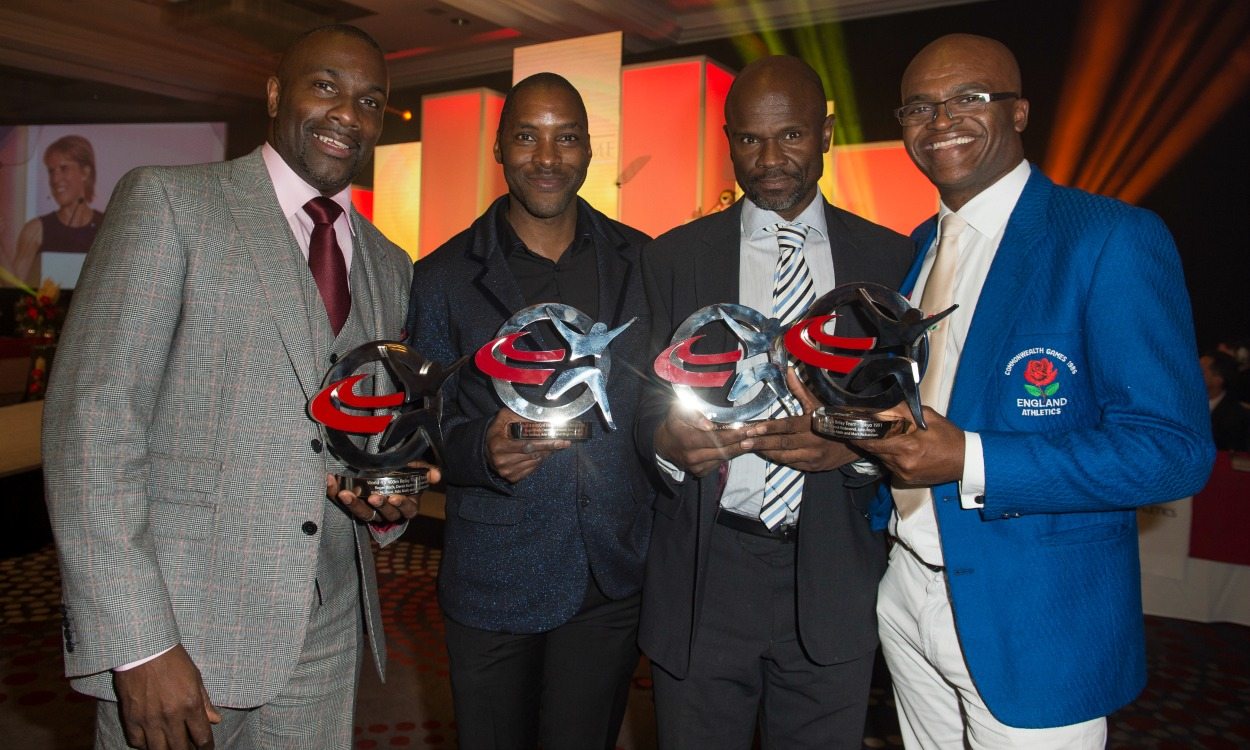 Twenty-five years after Britain defeated the United States to win the men’s 4x400m at the IAAF World Championships, the drama of Tokyo ’91 was revisited at the 2016 England Athletics Awards in Birmingham.

An audience of more than 300 filled the room at the Hilton Metropole with applause as video clips of the occasion were shown before the winning team of Kriss Akabusi, Derek Redmond, Roger Black and John Regis were rewarded by being inducted into the national governing body’s hall of fame.

It was some night for Akabusi, who was also inducted separately for his exploits as a 400m hurdler. In addition to his ebullient personality, he also brought his 1986 Commonwealth Games blazer with him, which he impressively can still fit into.

“I never forget I’m a kid from a children’s home and I still have to pinch myself from time to time,” said Akabusi, who is pictured above on the far right with, from left, Redmond, Mark Richardson and Ade Mafe – the latter two of whom ran in the heats in Tokyo. “It’s a real privilege to be recognised like this.”

Although, there is rarely a serious moment with Akabusi, and he added with a grin: “I think the hall of fame has been going for a few years already, so it’s about time I’ve been inducted!”

» Judy Oakes – domestically, the shot putter won a record 35 women’s AAA titles from 1977-2000, while internationally took three Commonwealth titles and was fourth at the Los Angeles Olympics in 1984.

» Joyce Smith – winner at the first two London Marathons in 1981 and 1982 and the first British woman to break 2:30 for the distance despite being well into her 40s. Prior to this she was 1972 International cross country champion and set a world 3000m record in 1971 during a career that saw her race for Britain from 800m to 26.2 miles.

» Peter Radford – world record-holder for 200 metres and 220 yards in 1960, he won Olympic bronze in the 100m and 4x100m in Rome in the same year and later set a European 100m record and world indoor 50m record before becoming chairman of the British Athletic Federation and athletics historian.

» 1991 world 4x400m champions – Roger Black, Derek Redmond, John Regis and Kriss Akabusi – the quartet’s victory over the Americans in Tokyo is one of the most memorable achievements in the history of English and British athletics. After progressing from the heats with the help of Ade Mafe and Mark Richardson, the Brits hatched a plan to put the US favourites under pressure from the start by placing British No.1 Black on the first leg. Thereafter, Redmond and 200m specialist Regis held their ground in the middle of the race. Then Akabusi used sit-and-kick tactics during an inspired final lap to give GB gold as he battled past individual 400m winner Antonio Pettigrew.

» Bud Baldaro – the much-loved and admired distance running coach has been a fixture on the cross country, road and track scenes for many years. Recent times have seen him struggle with Parkinson’s disease and he is a popular inductee due to the huge number of athletes he has helped to reach their potential, with at least 50 making international level.

» Ron Roddan – the London-based sprints coach is best known for guiding Linford Christie to Olympic and world titles at 100m, but he has assisted many more athletes during a lengthy career and is renowned for his wisdom, astute coaching instincts and generosity with advice.

» Run England Group of the year – Love Running Tuesday Nighters from the Isle of Wight.

» Volunteer of the year – Paul Pickard, middle-distance coach and official at Stevenage AC.

» Official of the year – Alan Bell.

» Services to athletics – Mike Davies, for a lifetime of competing, coaching, officiating and administration.