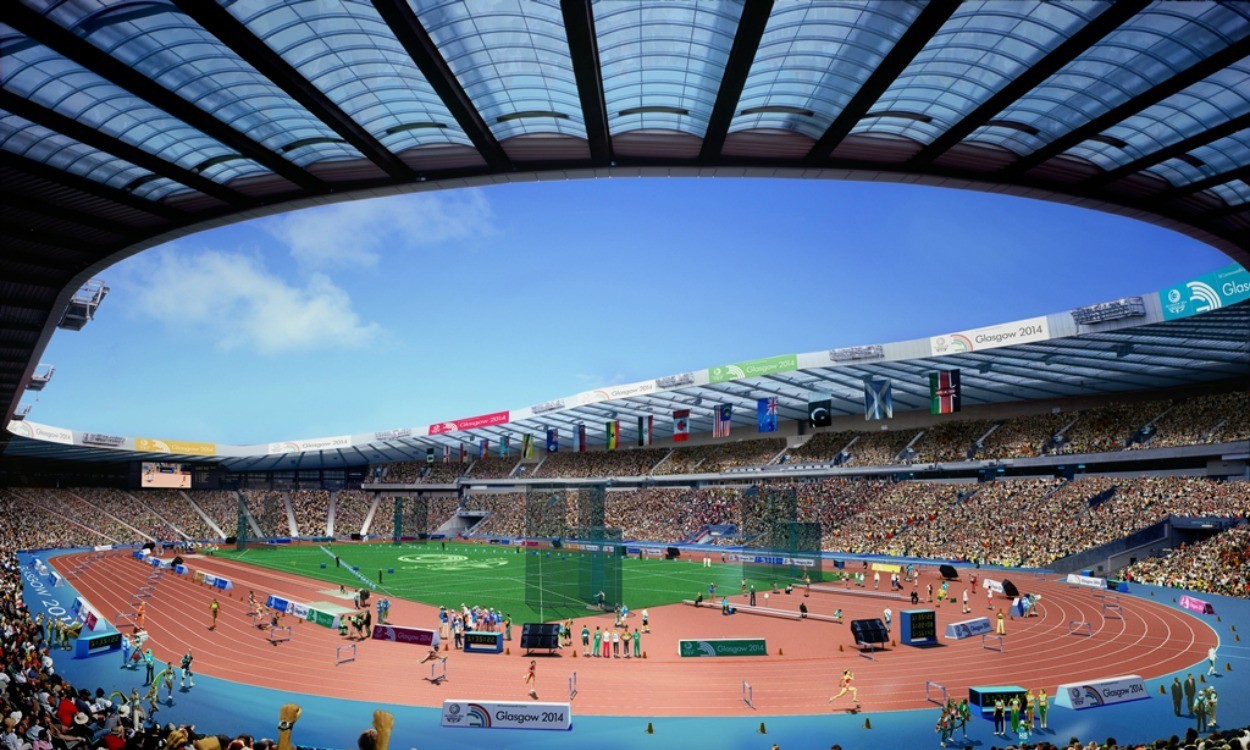 Love it or hate it, modern athletics is all about entertainment and the first Commonwealth Games session at Hampden Park included a ‘weegie wave’ and a mass karaoke to the sounds of the Proclaimers

For purists stuck in huge queues between the Mount Florida railway station and Hampden Park on Sunday afternoon in Glasgow, their patience will have been tested further when they eventually arrived inside the revamped arena. Any hope they might have held that the 2014 Commonwealth Games might feature a traditional presentation with sombre commentary and little or no music was swiftly squashed. Instead, there was not only loud music but a 44,000-strong karaoke rendition of the Proclaimers’ 500 miles, plus a mass ‘weegie wave’ – the Glaswegian equivalent of a Mexican wave.

Similar to the debate surrounding the balance between studio chat and live action during TV coverage, the topic of stadium presentation effortlessly divides opinion. Should the athletics arena resemble a church or concert hall? Doesn’t the athletics speak for itself? Or is music and lively commentary needed to improve the atmosphere? Everyone has a view.

Those who favour the old-fashioned approach of serious commentary and no music are losing the battle – and in some cases their sanity. Booming music was a feature of the London Olympics in 2012 and grand prix meetings are increasingly as much ‘show and spectacle’ as track and field.

One of the chief critics of the trend for loud music is Stan Greenberg. The former BBC statistician was in Birmingham recently to watch his 61st national championships and said in AW: “I think I have discovered why the music played at British athletics events is so loud – it is obviously an attempt to drown out some of the inane announcements made from the commentary box, and even more so from centre field. I understand that most of the ‘improvements’ made in recent years have been aimed at the “younger elements” of the audience, but this year the presentation side of the sport reached, or should one say descended to, a new low.”

Greenberg was talking about the Sainsbury’s British Championships, but his comments could easily refer to any major domestic event, including the 2014 Commonwealth Games. He is in Hampden Park this week, for example, listening to – or enduring, as he puts it – a similar commentary and production team.

At the British Championships, Greenberg was annoyed when the athletics action was interrupted by announcements relating to selfies and kiss cams. At Hampden Park on Sunday it was ‘weegie waves’ and stadium-wide karaoke.

Greenberg is not alone either. Telegraph sports writer Paul Hayward said during London 2012: “It makes the athletes bit-part players in a show, bombards their ears in races and suggests a crowd can’t appreciate the sport.”

The majority of people, though, appear to enjoy the modern-day presentation techniques. Governing bodies like the IAAF, European and British Athletics are happy to continue down this route. Children, especially, love the music, as do the many casual athletics spectators who randomly attend a track and field meeting in the same way a non-tennis fan might wander into Wimbledon for a day.

Stadium announcers at Hampden Park during the first session were Geoff Wightman and Andy Kay and the latter has written a riposte to Greenberg in the next issue of Athletics Weekly out on July 31. In it, he argues the non-athletics entertainment “represents a tiny fraction of the coverage” and that spectators are informed of all the vital statistics as the meeting unfolds. He adds: “It could be considered that our event presentation is skewed towards a younger audience as we feel that it is vitally important to attract an ongoing fan base. It’s a very difficult balance to strike but we think we get it about right.”

At Hampden Park on Sunday, for example, the presentation team carefully slotted the weegie wave and karaoke into a lull in the athletics action. While Greenberg winced, most of the stadium loved it and it was certainly better than the alternative of, say, five minutes of silence.

Then there are the views of people like Ato Boldon, the 1997 world 200m champion from Trinidad & Tobago, who says: “British Athletics flat out know how to put on a track and field meet. From music, to the way the meet is run, is an example to the world.”

Certainly it is all a far cry from athletics meetings of yesteryear that featured only basic information from stadium announcers. For example at the 1972 Olympics – and prior to those Munich Games – athletes were introduced on the start line, with Olympic champions or world record-holders pointed out, and little else. Then, at the 1996 Olympics, one of the announcers accidentally carried on commentating during a race and it was so warmly received it has continued to this day.

My view on the presentation at modern meetings is that the music becomes a tad too loud when you’re unable to have a quiet conversation with someone sitting alongside you. There is no doubting, though, that the sound system and commentary help improve the atmosphere and Hampden Park was certainly rocking during a pulsating 5000m final on Sunday teatime won by Caleb Ndiku of Kenya.

In fact, even Hampden’s record crowd – an amazing 149,415 from a Scotland v England football match in 1937 – would surely have struggled to have made more noise than the roar heard during the opening day’s athletics action at Glasgow 2014.