Great North Run at 40: the idea which became a phenomenon 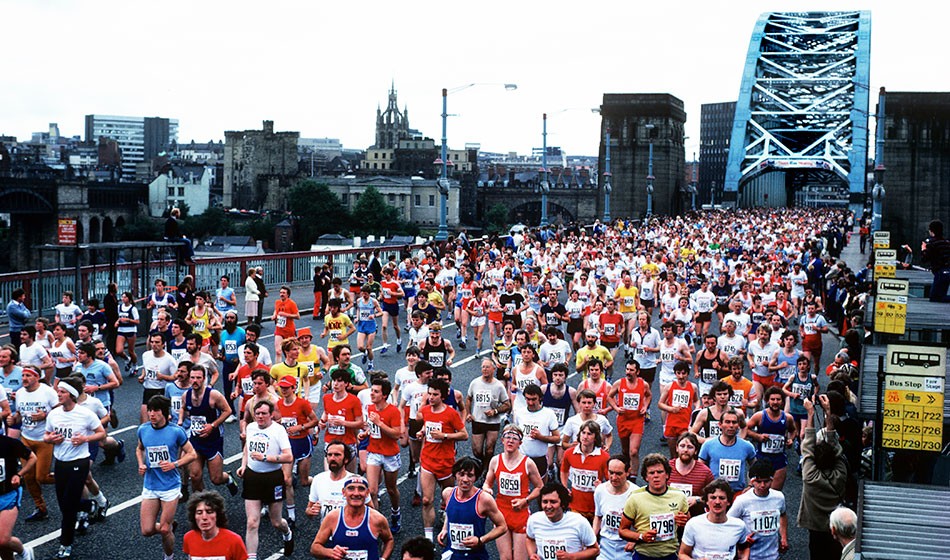 On the eve of its landmark staging, event founder Sir Brendan Foster explains how a vision was turned into record-breaking reality

Sir Brendan Foster had an idea, he just didn’t have a plan around how to turn the vision into reality. In the end, he got by with a little help from his friends.

It was late 1980 when the Olympic bronze medallist, as well as Commonwealth and European champion, asked four of his fellow Gateshead Harriers to the Five Bridges hotel for a post-training chat. “I’d just said: ‘I’ve got an idea and I’d like to talk to you’ but they didn’t know what it was about,” he recalls.

As it turned out, the subject of the meeting was how to go about staging a mass running race on Tyneside. In preparing for the Olympics earlier that year Foster had spent time in New Zealand training with Dave Moorcroft and had run the Auckland marathon. It was another, shorter, race out there which would make the more lasting impression, however.

We can't wait for the action to start tomorrow 😍 pic.twitter.com/oO4RBBrZbq

When the two Olympians set foot on the start line to the Round the Bays event, they could not quite believe what they saw.

“When we arrived, there were thousands of people there to run it,” says Foster of the 8.4km run. “At the time, the biggest event in the UK was the National Cross Country Championships which had 1300 runners and we used to think that was monumental! We’d never seen that before – we didn’t know what it looked like.”

It was a fateful day. The sight of those crowds gathering to run from the city to the sea had immediately planted a seed. Even as they competed in the Round the Bays event, Foster had already begun chatting to his friend Moorcroft about how it might work on his home patch in the North East of England. Hence the hotel gathering later that year.

“I explained about the Round the Bays race and how I wanted to do something similar and John Caine [who would become Race Director] said: ‘Sounds like a good idea’,” adds Foster.

“We were all runners, we all wanted to encourage other people to run, but we had no idea what would happen.”

Few could possibly have imagined what would follow. The half-marathon distance was settled upon, as was a route which travelled from the city, Newcastle, to the sea at South Shields, and the Great North Run was born.

Now came the small matter of making it happen. To this day, Foster admits he doesn’t actually know if he was ever given official permission to press on with his plans.

We were all runners, we all wanted to encourage other people to run, but we had no idea what would happen

“Once we decided we were going to do it I had to write to the police and ask for permission to stage it,” he says of a letter which now hangs on the wall in the offices of the Great Run Company. “I was told ‘it is not our policy to encourage events like this on the highway’.

“We don’t actually know what happened next. They didn’t say ‘no you can’t’ and they didn’t say ‘yes you can’ they just said it wasn’t their policy to encourage events like that on the highway. But before we knew it we had a police liaison officer who was helping us to organise it.” 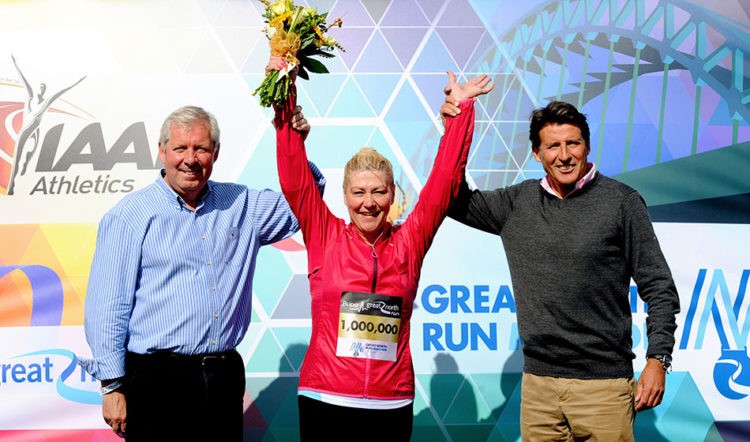 And so it was that, on June 28, 1981, over 12,000 people toed the startline of the inaugural event, with thousands more lining the route. A chord had been struck.

This was only a matter of months after the staging of the first London Marathon, the brainchild of the late Chris Brasher. He and Foster were good friends but neither had mentioned to the other their plans to bring running to the masses. It was by quirk of fate, rather than by design, that 1981 would be such a landmark year for the sport in Britain.

Olympic silver medallist Mike McLeod was the first Great North Run finisher, while Kevin Keegan – then one of the most high-profile sportsmen in the world – effectively became the first celebrity runner as he appeared in a shirt which incorporated the colours of Newcastle United and Sunderland. It was an unqualified success but, as Foster quickly realised, there would be little time to reflect on a job well done.

“After the event, all the press said: ‘What’s the plan for next year?’, but we’d only just done step one of an idea, so I was a little bit thrown.

“I said: ‘To be honest, the public are going to insist we do it next year’. Everybody ran – and those that couldn’t take part came out and watched it, so you couldn’t go from the fulfilment of an idea to then saying, ‘Well we don’t want to do that any more’.”

The event did go ahead the following year and, but for the pandemic, would have celebrated its 40th staging 12 months ago. That the milestone will be reached, and that the event will take place in 2021 is a cause for great celebration in Foster’s eyes.

For Covid reasons, the route will look more than a little different this year as it starts and finishes in the centre of Newcastle, crossing the Tyne Bridge twice. The elite fields will feature the likes of Galen Rupp, Jake Smith, Stephen Scullion, Stewart McSweyn, Hellen Obiri and Eilish McColgan followed by around 57,000 people throughout the day.

“I think there is an extra significance to this year,” says Foster and, asked what success might look like this time around, he adds: “It will demonstrate that the country’s getting back to normal and that ordinary people are getting back to doing what they want to do.”

He prefers to be forward facing. “Doing the 40th will be a step, but then doing the 41st will be another step,” he says when asked which aspect of his creation makes him most proud. “The 40th run will be the same as the first – it will be [a case of] ‘What can we do next year? How we can we make it better? How can we make it bigger or more impactful?’

“It’s a running mentality. When I broke the [3000m] world record at Gateshead, I went for a five-mile run that night. When you think about it you might wonder ‘why were you doing that, you had just broken the world record?’ but it’s what you do. You keep running.” 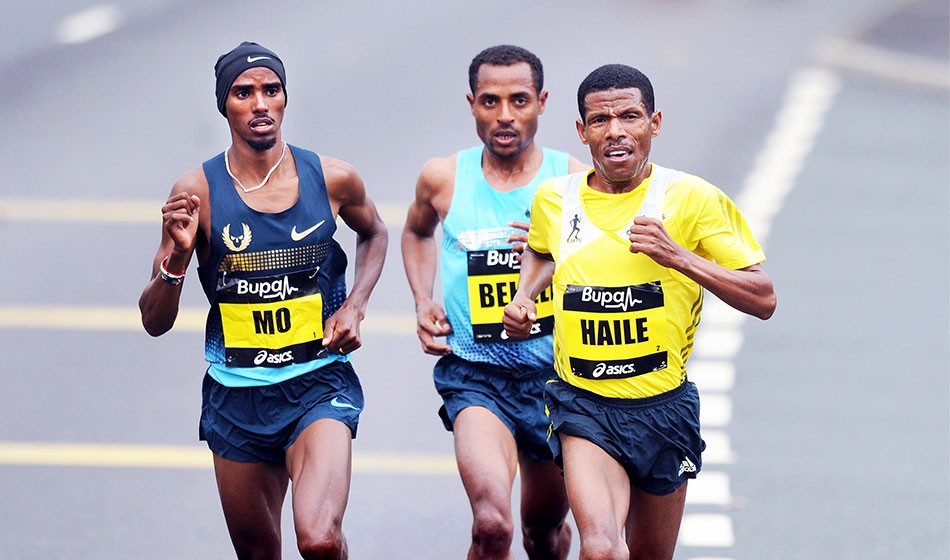 We had the race with Haile Gebrselassie, Kenenisa Bekele and Mo Farah. It was the only time I ever felt a bit emotional because I thought ‘yeah, we’re at the top table now’

There have been favourite moments, however. McLeod winning the first event all those years ago is still fresh in the mind, as is Keegan charming his way through the crowd during his run of 1:24. Becoming the world’s first event to welcome home its one millionth finisher, in 2014, is a source of considerable pride, too.

There have also been a number of “world bests” to savour – the downhill, point-to-point nature of the usual Great North Run course makes it ineligible for world records – while the list of winners elsewhere in these pages reads like a who’s who of distance running greats.

However, there was a point in the 2013 elite race which really stuck with Foster.

“We had the race with Haile Gebrselassie, Kenenisa Bekele and Mo Farah,” he says. “I saw the three greatest distance runners of all time running neck and neck with each other past Gateshead Stadium, which had been my hunting ground. I was commentating on the race for the BBC at the time and it was the only time I ever felt a bit emotional because I thought ‘yeah, we’re at the top table now’.”

There will be more moments to come, of course, and new memories to create. All of them will lead back to that one thought which came to Foster’s mind.

“It was an idea, its time had come and it worked.”