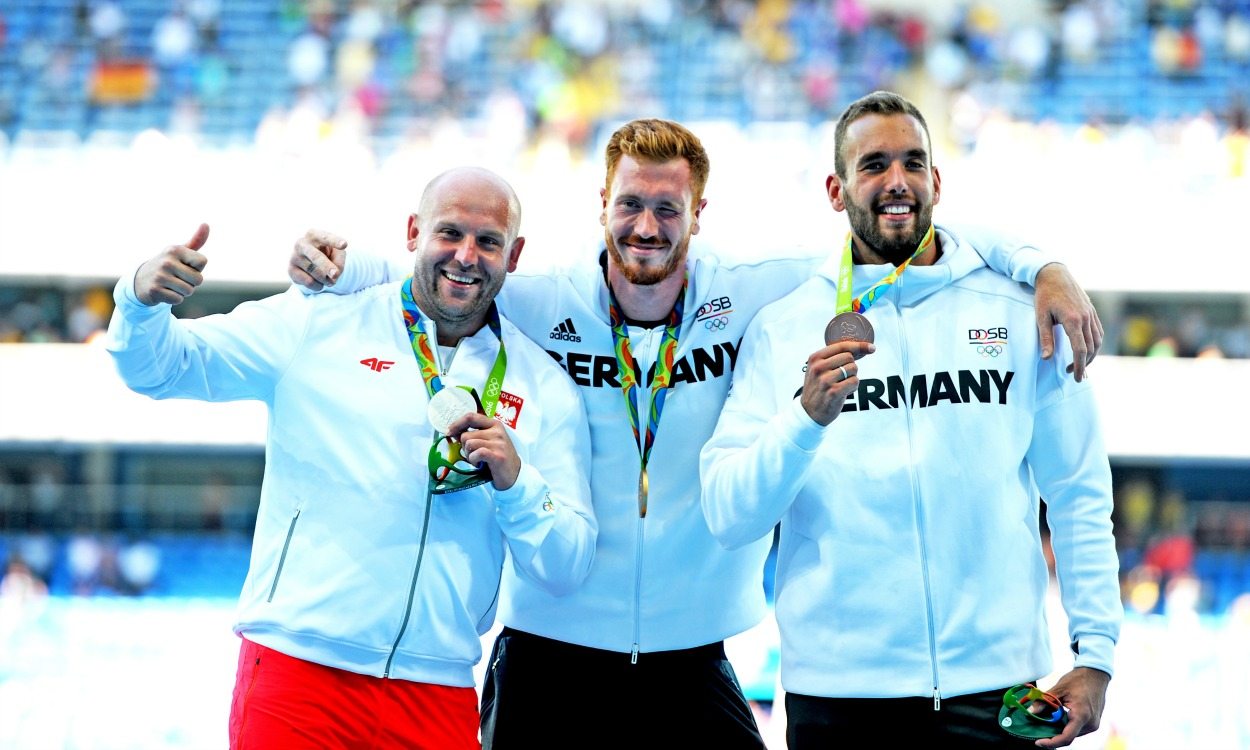 Germany’s Christoph Harting timed the throw of his life to perfection as he launched the discus to a 68.37m PB in the final round of the competition to claim victory ahead of Poland’s world champion Piotr Malachowski.

Many might have expected a Harting to appear on the podium, but after defending champion Robert was a casualty of the qualifying round it was his younger brother who stepped up to see that the title would remain in the family.

With a best of 66.34m before his final throw, the younger Harting added more than two metres to that mark on his last attempt, also improving his PB by 31 centimetres, to leapfrog Malachowski who was leading with 67.55m. Although the eventual winner led circle-side support for the Pole, clapping him as he took his final throw, Malachowski couldn’t respond and had to settle for silver ahead of Daniel Jasinski, who claimed a second medal for Germany with 67.05m for bronze, also from his final throw.

On being beaten by Harting, the now two-time Olympic silver medallist Malachowski said: “I wasn’t surprised by his result, but I was more worried about Daniel Jasinski. He was on fire.”

The Pole added: “In discus throw at this level, you can just make a little side step. Details matter. You can put your feet just a little bit differently and it can add two or three metres. He (Harting) did something smoother and that’s why he got a few extra metres.”

Belgium’s Nafissatou Thiam gained a narrow lead ahead of defending heptathlon champion Jessica Ennis-Hill to set up a close contest with two events remaining. Leaping a 6.58m PB in the long jump, she is five points ahead of the Briton with 5018, while Katarina Johnson-Thompson sits third on 4967 points with the javelin and 800m remaining.

Akela Jones is fourth on 4907 and Brianne Theisen-Eaton fifth on 4872.

Johnson-Thompson and Ennis-Hill both had their best jumps in the first round, recording 6.51m and 6.34m respectively. Thiam looked to have recorded a huge leap of 6.93m in the first round but it was a foul and her foot had been so far over the board it didn’t leave a mark in the plasticine.

Usain Bolt got his triple title defence underway with an easy victory in the 100m heats. Clocking 10.07 he cruised through to the semi-finals where he will be joined by quickest qualifier Justin Gatlin, who ran 10.01, plus the likes of Trayvon Bromell, Yohan Blake, Nickel Ashmeade and Andre De Grasse.

Britain’s Chijindu Ujah also secured his spot in the semi-finals after running 10.13 for second in heat one, while James Dasaolu, who was drawn in the same heat as Usain Bolt at London 2012 and managed to do the same in Rio, placed third with 10.18 and made it through as a fastest loser. GB team-mate James Ellington didn’t share that success, however, as he stumbled out of the blocks and though he recovered, it wasn’t enough and he clocked 10.29 for fifth in his heat.

Also among those missing out was Sean Safo-Antwi, who switched his allegiance from GB to Ghana earlier this year, and Netherlands’ European champion Churandy Martina.

In contrast to the cloudy skies and sparse crowds of the first day of action, supporters were out in the sunshine in force on day two  at the Olympic Stadium and were very vocal, chanting ‘Bolt, Bolt’ as well as roaring on home athletes.

“It wasn’t the best start,” said Jamaican sprint star Bolt. “I felt kind of slow. I’m not used to running this early at any championship.

“Hopefully tomorrow I’ll come out and I’ll feel much better, much smoother.”

Ellington said: “I’m in really good shape, I just messed the start of the race up. I literally nearly fell flat on my face.

“The relay is now the focus, I’ve got to come back and execute because we’ve got big hopes.”

It was job done for Britain’s 2008 Olympic champion and 2012 silver medallist Christine Ohuruogu in the first round of the 400m as she ran 51.40 for second in her heat behind USA’s Natasha Hastings. American Allyson Felix took the second 400m heat in 51.24, while Jamaica’s Stephenie Ann McPherson, Shericka Jackson and Christine Day were also among those to progress.

USA’s Phyllis Francis went quickest overall with 50.58, while Bahamas’ Shaunae Miller clocked 51.16 after easing down to win her heat which also saw GB’s Emily Diamond run 51.76 for fourth which gained her a fastest loser spot.

Seren Bundy-Davies was disappointed with her seventh place finish and time of 53.63 to see her individual competition come to an end. “I’ve been in PB shape in training, I’ve run PBs this season and I feel like I’m running well in training,” she said. “I’m really gutted in that performance as I don’t think it reflects what I am capable of.”

The women’s steeplechase heats had their share of drama. Bahrain’s Ruth Jebet was among the winners as she took race one in 9:12.62, while Kenya’s Beatrice Chepkoech won race two in 9:17.55 from USA’s Emma Coburn with 9:18.12 and Tunisia’s defending champion Habiba Ghribi with 9:18.71. But in the third and final heat, won by Kenya’s Hyvin Jepkemoi in 9:24.61, Ethiopia’s Etenesh Diro was involved in a fall and her shoe came off. Completing the race with only one shoe she went on to finish seventh in 9:34.70.

However, after a successful appeal it was announced that Diro, along with Ireland’s Sara Treacy and Jamaica’s Aisha Praught, had been put through to the final despite not initially qualifying following the clash on the track.

After finishing 17th in her heat in 10:14.18, Britain’s Lennie Waite explained how she had suffered a plantar tear at the Anniversary Games in London and had been forced to combine resting with cross-training and doing a bit of running with no spikes or hurdling since.

Describing it as “like stepping on a piece of glass”, she added: “I did the best with the hand I was dealt. It’s hard to go in with the best people in the world knowing that you haven’t been able to put your foot on the ground very much. It was hard to overcome mentally and I tried to give it my best.”

Three athletes achieved the automatic qualifying mark in the first round of the women’s triple jump, led by Colombia’s world champion Caterine Ibarguen. One leap was all it took as she recorded 14.52m to safely progress along with world indoor and European bronze medallist Paraskevi Papachristou of Greece with a 14.43m jump and Kazakhstan’s defending champion Olga Rypakova with 14.39m. Among the first round casualties was 2011 world champion and Olympic bronze medallist Olha Saladuha who could only manage 13.97m.