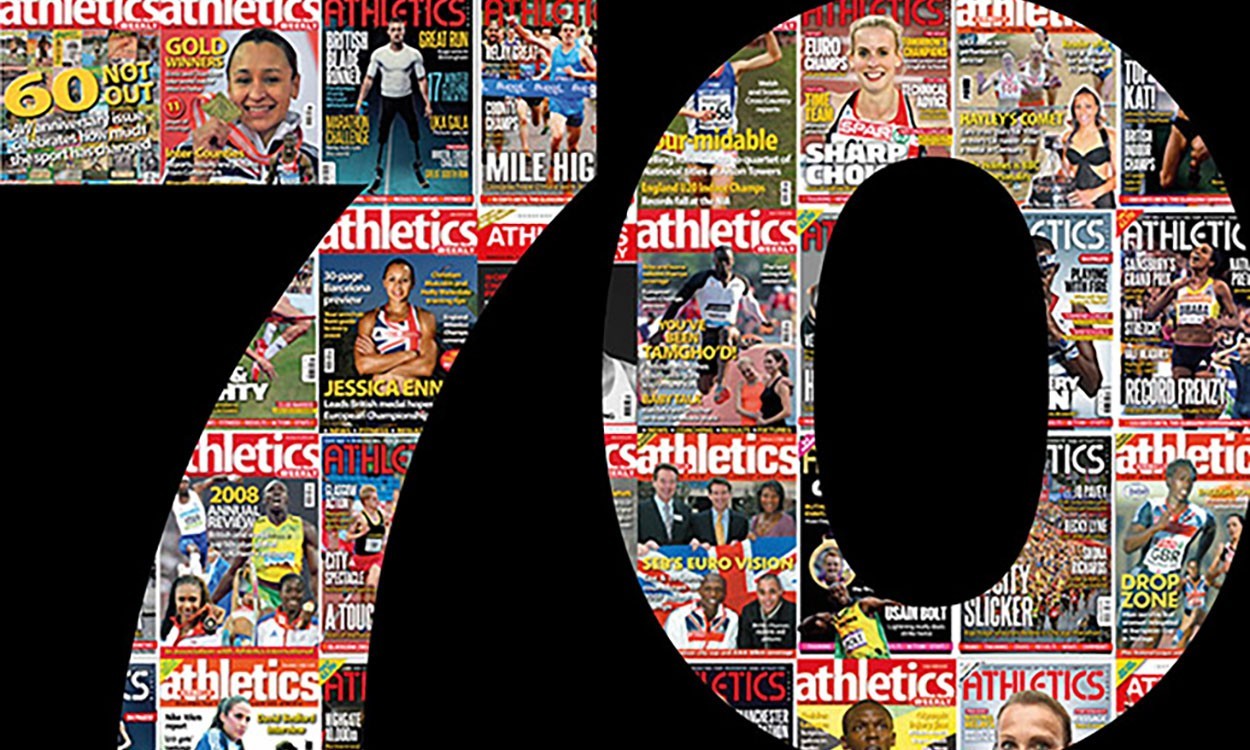 From the days of Fanny Blankers-Koen, Emil Zatopek and Roger Bannister to the era of Jessica Ennis-Hill, Mo Farah and Usain Bolt, Athletics Weekly has covered the sport since December 1945 and the magazine marks its 70th birthday this week with a special celebratory issue.

‘AW’, as it is widely known, was created just after World War II by Jimmy Green, a businessman, athlete and official who initially published it from one of the rooms in his bungalow in the English county of Kent. Curiously, the first-ever issue had “Vol II, No I” on the cover, but Green created this white lie in order to get past post-war paper rationing rules that forbade the launch of new publications.

For the first four years the magazine also came out once a month and was called Athletics. But such was the thirst for athletics news and results, it became weekly in 1950.

During this period, it has chronicled every Olympics from London 1948 to 2012 and is going strong under new owners, The Great Run Company, as the sport heads toward Rio 2016. Indeed, the magazine is one of a handful of long-surviving track and field magazines alongside Track & Field News in the United States (launched in 1948), Leichtathletik in Germany (1924) and Atletismo Español (1951).

Based in the UK, it invariably carries a British bias and all of the nation’s top athletes can trace their early performances back to the pages of AW. Ennis-Hill, for example, first appeared in the magazine aged 13 when she finished a mere 10th equal in the 1999 English Schools high jump. Farah’s first mention was a similarly humble one as he was listed as 10th in the under-13 section of the Mini London Marathon at the age of 12 in 1995.

Greg Rutherford, another reigning British Olympic champion, had a similarly inauspicious start, with the July 11, 2001, issue of AW including his fifth place in the English Schools long jump final. Others, meanwhile, got off to a winning start, such as Daley Thompson, the decathlon legend, who first appeared in AW in July 1974 after winning the Sussex Schools 200m title aged 15, while IAAF president Sebastian Coe first saw his name in the magazine in February 1971 after winning the colts’ race at the Yorkshire Cross Country Championships.

The list goes on and naturally Bolt was featured with a photograph in the magazine’s coverage of the 2002 IAAF World Junior Championships and has subsequently appeared on the front cover several dozen times.

British politicians such as Ming Campbell, Cecil Parkinson and Jeffrey Archer are among the many famous people who have popped up in the pages over the years, while Alan Turing, the scientist featured in the recent Hollywood film The Imitation Game, was an AW regular in the 1940s.

No one has appeared in the magazine more than Eric Shirley, though. The 1956 and 1960 Olympian in the 3000m steeplechase first appeared after winning the Middlesex county youths cross country title at the start of 1946 and the 86-year-old is still cropping up in the coverage today as a British masters champion.

“All those years after winning that Middlesex youths title, I am the fastest in the UK as an over-85,” he says in the latest issue of the magazine. “If you can’t beat ’em, then outlive ’em – that’s what I say!”

Jason Henderson, editor of AW, says: “When AW was born, athletes competed on cinder tracks, with performances measured in feet and inches and the ticking hand of a clock. The sub-four-minute mile was still a dream and women competed in a tiny number of events compared to men.

“Yet now the sub-four mile is relatively commonplace, women have run the marathon faster than the men’s world record in 1945, which would have been unimaginable back then, and we’re even talking about a possible sub-two-hour marathon. AW has often been described as the historian of the sport and I can’t imagine what the next 70 years are going to bring.”