Becky Lyne on her experiences in athletics 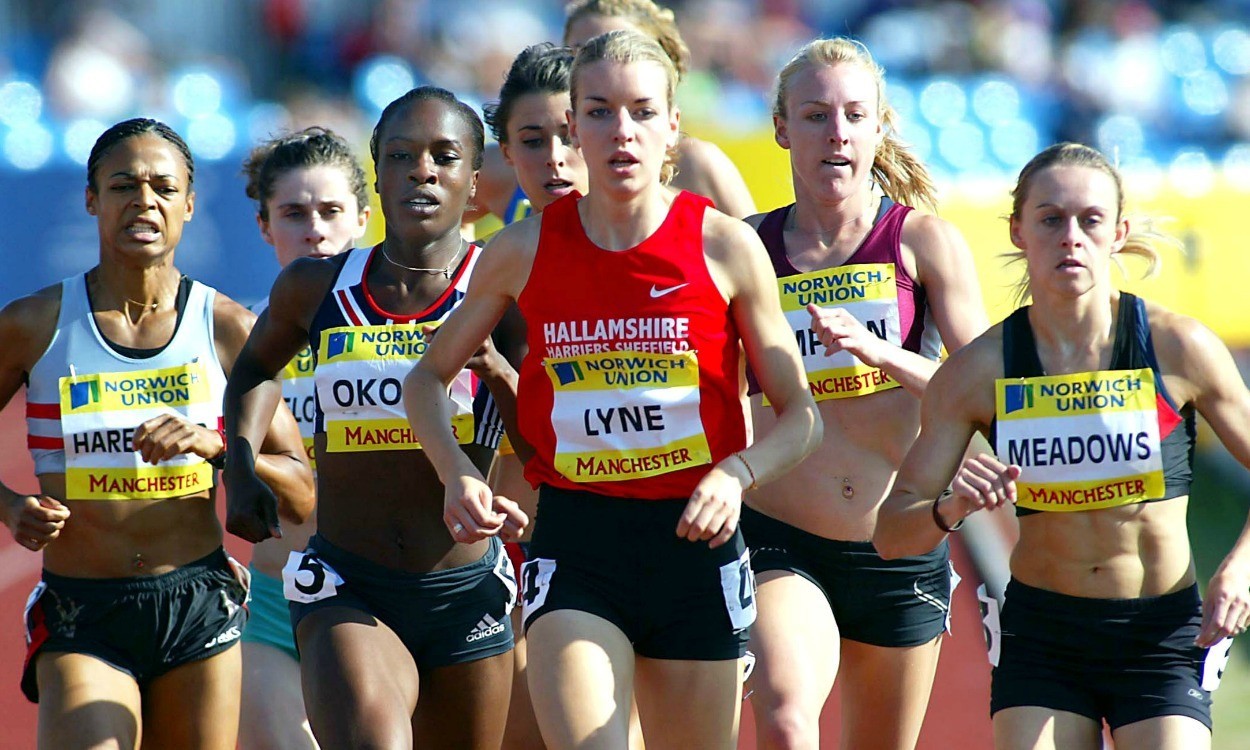 Becky Lyne still has an undeniable passion for sport and was keen to tell AW about her rise-and-fall story and her new career.

As she says: “I’ve learned from athletics to be patient and put the work in and the results will come and that applies to everything.”

The Hallamshire Harrier, who now runs her own business, TrYumph Health, started out as many runners do on the traditional mud and guts of cross country. She says: “In my very first race I finished 18th in the Sheffield primary schools’ cross country league. I did subsequent winter seasons consistently up until leaving secondary school with my greatest achievement probably being winning the Yorkshire under-20s – I never managed higher than 31st at the English Schools, though.

“After that I decided to focus mainly on the indoor season as my heart wasn’t really into mud. I think my mental and physical make-up is more suited towards the track. I didn’t qualify for the English Schools on the track until year 10 when I ran the 1500m. This still stands out as one of my fondest moments as, despite being the slowest on paper, I knocked 11 seconds from my PB to take the runners-up spot with 4:36 in front of my whole family at the Don Valley Stadium.”

The former Loughborough student had a spell where she seemed to be jinxed. At the European Youth Olympics in 1999 she got tripped, in the 2000 World Juniors in Chile she went down with food poisoning and a year later finished outside the medals when fourth at the European Juniors. Nevertheless, in 2003 her luck changed for the better when winning the European under-23 title in Bydgoszcz and this was fundamental in developing her for future international competitions.

So was there a breakthrough race that changed her outlook? “The one that allowed me to dare to dream was the English Schools race as I went from literally nowhere to earning my first junior international vest. Other breakthroughs included going from 2:05 to 2:02 in one race to qualify for the Commonwealth Games in 2002 and then finally going sub-two with a two-second PB, clocking 1:58.20 in 2006 at Gateshead, which was very surreal at the time, but finally cemented the belief in my ability to be a top athlete.”

Lyne was training four times a week before going to Loughborough University (one track, one circuit session, one park session and one long run). She adds: “I wasn’t actually coached by George Gandy when I was studying there, but followed programmes set by Gordon Surtees and occasionally joining in with George’s group. The main difference when starting university was that I started doing weights twice a week and added in a couple of easy runs, however I think my improvements were down to natural progression more than anything else.”

From September 2002 until December 2003 Lyne spent her time studying at Butler University in Indianapolis on an athletics scholarship. She explains: “I did it in the middle of my degree at Loughborough, which meant I could transfer credits across from my sports science degree to enable me to get a full degree out there in 18 months – albeit in Spanish! It was a fantastic experience with so much depth in quality to pitch myself against. It was also great to feel part of a team, even though I tended to do most of my training alone as most of the team focused on longer distances.”

Although 2006 was without a doubt her best year, Lyne’s 1:58.20 still placing her fourth on the UK all-time 800m list behind Jenny Meadows, Kirsty Wade and record-holder Kelly Holmes, she had been injured the previous winter.

However, she cross-trained really hard and says: “I didn’t realise what good shape it got me in to. Off just a few weeks of running I went warm weather training and was running better times than ever. When I got back I started training with Dave Turnbull, who had a group of boys who were of a similar standard to myself, and enlisted the help of an agent to get me into some decent quality races.

“Feeling totally out of my depth I got lanes in both FBK in Hengelo and the Oslo Golden League. However, after such a tough year, I just approached them with a new mindset of ‘que sera, sera’ and was more than pleasantly surprised winning the former and taking second in the latter. The following week I ran my 1:58.20 personal best.

“It was as if in five weeks my whole world had turned around. From there it was such a whirlwind season as I rode the wave of confidence and opportunity while managing to keep all the usual self-defeating demons at bay. A European bronze, sixth place world ranking and the accolade of Britain’s female athlete of the year were the result – amazing.”

Following her success in 2006, she thought that with the freedom and finances to be a professional athlete she could train much harder. She laments: “I spent that winter training with my agent’s group (Nic Bideau) out in Australia, but they were more distance-oriented and I got sucked in willingly to running high mileage – 70 miles per week as opposed to around my normal 35 miles. The inevitable happened – I broke down, but desperate not to lose the fitness I had gained I cross-trained harder than ever and ended up burning myself out.”

The subsequent years merged into a series of injuries (mainly lower leg) despite her best efforts to find an environment in which she could thrive. In the winter of 2008 she trained in Kent with Holmes, the following year she had a brief stint with Wilson Kipketer in France and Jama Aden in Sweden and from 2009-12 she trained with George Gandy in Loughborough, Kenya and Font Romeu with a three-month spell with Janeth Jepkosgei and Eunice Sum in Eldoret in 2011.

The 32-year-old Sheffield athlete admits that she has never definitively made a decision to call it a day and points out: “It’s been more of just a gradual waning of my confidence and competitiveness over the years.

“There was one run in particular in May 2012 when I tore my calf yet again just as I was rounding into some decent shape and I knew there would be no time even for miracles to get me back racing before the trials. I sobbed the whole way home. But shortly after, I felt a sense of liberation, like I could finally get on with my life.”

When I ask her about her best ever race, Lyne is just as quick to answer as she was on the track. “The Europeans in 2006,” she says. “It was a messy race as I ran in lane two the whole way and got a couple of knocks at the bell and at 600m. I was also nearly knocked to the floor at 700m, but I was so determined to get a medal and drove as hard as I could to the line. You could tell from my face as I crossed the line that I wasn’t happy as I felt a little cheated at being so roughly treated in the race.

“Although I may get in trouble for saying this, being beaten by two Russians, you couldn’t help but question the legitimacy of the result back then and I was somewhat vindicated in this feeling as Svetlana Klyuka, who finished second, subsequently failed a drugs test, though it was outside the window for me to be promoted to silver. I’m really encouraged to see more cheats being caught these days and the playing field is definitely getting more level for everyone and that can only be good.”

After a career cut short in her mid-twenties, has she any regrets? Lyne says poignantly: “Strange as it may sound, not really! Although I loved achieving success on the track, I really didn’t like the trappings that went along with being a successful athlete, like media attention. Furthermore, all the ‘mistakes’ I made led me on what, looking back now, was an incredible adventure where I met so many amazing people and visited some wonderful places. Everything I learned along the way has prepared me ideally for my current career.”

Last year while visiting a gym in Chatsworth she discovered they wanted a personal trainer. Lyne explains: “By coincidence I had just completed a gym instructor course and now just over a year later I have established my business there – not just as a personal trainer though,” she says.“I also hold running groups and do children’s ‘wild athletics’ coaching in the beautiful park there.

“I also offer group conditioning classes that I call ‘re-bootcamps’ as they combine fitness pilates, body maintenance and relaxation – all the things I should have done more of as an athlete! It’s still early days with the business and I’d like to develop it and reach out to more people, particularly increasing the size of my running and reboot classes – time to bloom where I’m planted!”

Lyne still likes to travel and has kept in contact with many people in Kenya – not least because she has set up a couple of twinnings there between schools from Sheffield and Iten. She adds: “Last February I took a group of teachers out there to visit the schools and during the trip met Myles Edwards (Scottish 800m athlete), who has set up a foundation to help children there (gathimbaedwardsfoundation.org).

“We’ve been developing a twinning package since and I’d love to be able to spend more time out there working on it in the future – particularly during the British winters!”

» This interview was first published in the October 16 edition of Athletics Weekly magazine. Make you sure you don’t miss out on any of AW’s future athlete features – you can take out a subscription to the magazine today here