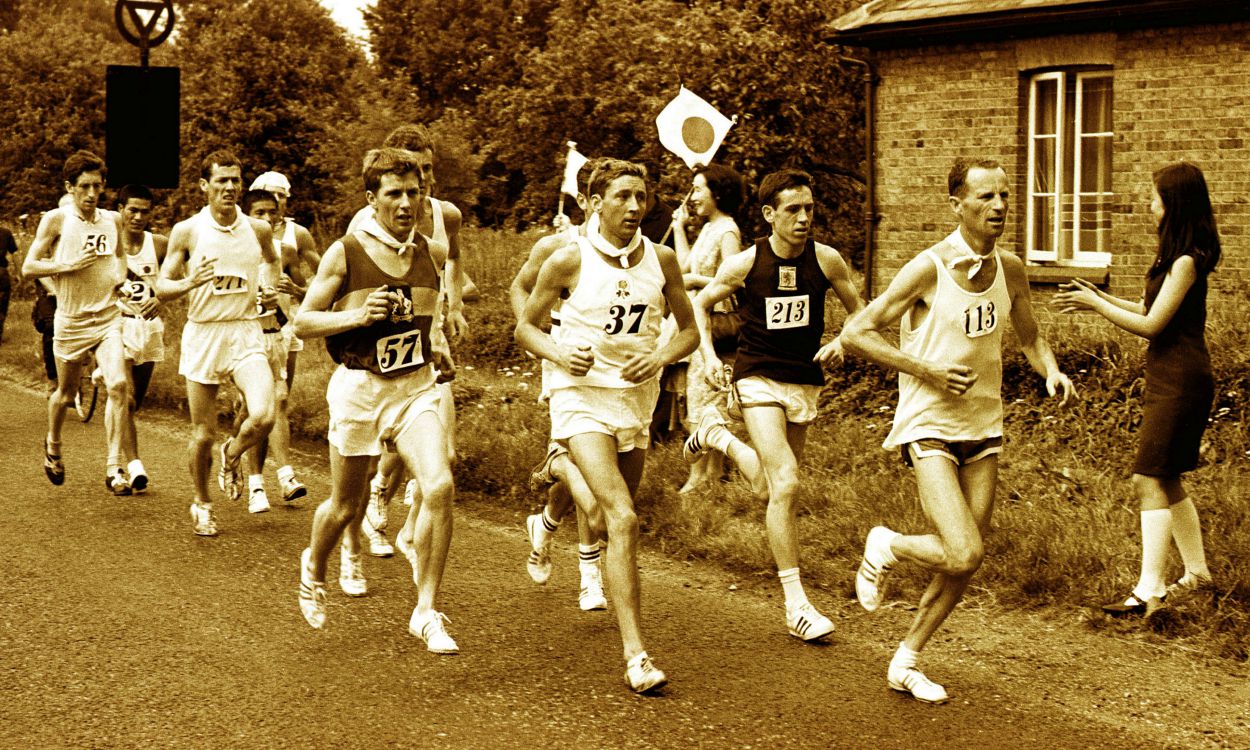 The recent death of Ron Clarke, the Australian 20-plus times world record-breaker, set me back thinking of the magical 1960s and Britain’s place as one of the world’s leaders in 10,000m, cross country and marathon running alongside Clarke’s exploits. I was comparing today’s 10,000m and marathon men with the class of the 1960s and it is very interesting.

However, before going into details, one aspect of some but not all of today’s aspirants, namely seeking sponsorship for full-time running, disturbs me, as does the preference for altitude/warm weather training.

They have lost sight of the ‘bigger picture’ and should in my view learn the trade here in our country, reach international status, then seek out the various “goodies”. Some full-time runners earn roughly £8-10,000 per year – lower than the minimum wage! Running races to put food on the table is the wrong reason.

Chris Thompson would be in there in fourth or fifth despite an injury blighted career. The great Brendan Foster (mid-1970s) would be No.2 on the all-time British 10,000m. Basil Heatley and Brian Kilby would also come above Mo in the marathon virtue of Olympic silver/world record (Heatley) and Commonwealth/European gold and fourth in the Olympic marathon (Kilby).

This article is not about demeaning today’s runners and their ability. It is more of a plea to move back to a more rounded and comprehensive programme of distance running build up. I will list a few of mine and other men’s ideas from the 1960s for your perusal.

Britain had in that decade a total of 10 men who won Commonwealth and European marathon medals, an Olympic medal and several long distance track world records as well as running international cross country team races. Apart from these ten men we had at least 15 men who were cross country internationals and also won 5000/10,000m games medals – a grand total of 22 games medals and seven world records.

Just below these 25 men we had at least a dozen men clocking 2:15-2:17 for the marathon, so the standard in Britain 45-50 years ago was incredibly high!

How did we achieve this, especially as all of us were working full time? Adcocks was a gas fitter, Jim Hogan a groundsman, Heatley a gardener, Hill a research scientist, Ian Stewart a gunsmith, myself a bricklayer/plasterer etc.

All of us were also married and most had young children and importantly none of us apart from Stewart had a coach! Can you imagine how good we might have been if we’d had coaches and schedules?

We all experimented with different ideas but raced prodigiously over distances from 800m to marathon, plus cross country and road relays. Obviously in different areas some were better than others. For instance the best road relay man by a street was Mike Freary of Bolton Harriers. The best long distance track exponent was Hill with world records at 15 miles and 25km. Mel Batty held the world record for 10 miles. I held the world 30km record (twice) and also for two hours. Hogan and Tom Johnston each held the 30km record for more than a decade.

“Can you imagine how good we might have been if we’d had coaches and schedules?”

What is the point of long distance track races? Well, watching them was like watching paint dry, but 75 laps at 73 seconds each lap requires enormous concentration and you soon learned to hug the inside edge of lane one (saving seven metres a lap etc). These races made you tough mentally and the point of 800/1500/3000m with most of us knocking out 100 miles per week in training four or five of these short races soon had us tuned into the important six miles (10km) races, which kicked off at the Inter-Counties Whit weekend in late May and was usually the first of two trials for a major games.

I personally didn’t care a damn who beat me at 800m. I even did a 400m in late April in an hilarious 57 seconds, making a noise of 0.5 on the Richter Scale and with every young kid in the North East in front of me. It was a means to an end.

Road relays apart from the first leg (which is a proper race) are individual time trials – you against the clock – running in a vacuum. Most people start off too fast – you have to learn self control. On varying training programmes, aged 22 I decided for me that speedwork (that is, 4 miles, 40 yards circular road course which was Morpeth Harriers’ senior championships that conveniently went past my home) would do. Fartlek with seven efforts, one hill varying distances from 100-500 metres done flat out from Monday to Thursday with easy Fri/Sunday and race on Saturday – total 35 miles.

This started mid-October and within six weeks I was second in the Morpeth to Newcastle over 13.7 miles, fifth in the Northern cross country, 14th in the Inter-Counties, Scottish National cross country champion, ninth in the English Champs, fifth Scot in the International Cross Country and then 28th in a local 10km race in April when the system crashed to rock bottom!

I was very disillusioned for a while until I read an article by Brian Kilby titled LSD (Long Slow Distance) and I liked what I read and started building up to 100 miles per week for the next six weeks or so. It took six months to get used to it but racing form took off and international cross country and road race honours soon came along.

I did the same five miles every morning 2 x routes all road (winter), road/fields/woods (spring to autumn) 12 miles evening second run, fartlek, flat out twice per week for the first year. The next two years increased to four sessions per week. All of this was done in heavy training shoes (1lb in weight each shoe) and full tracksuit – most people thought I was stark, raving mad. However the lack of injury – I lost three months’ total in 15 years – so the end results justified everything.

Other runners like Ron Hill did unusual things like running a race on one side of Manchester before cycling across the city to do another.

Nearly all of the top men could relate similar stories of hardship to get where they were. The 1960s was a cavalier period in all walks of life, not just athletics.

My running was still changing/evolving each year but aged 29 I went up to 20 miles a day (10 in the morning in 51-54 minutes) and 10 miles at teatime (6min mile pace with clubmates).

In 1970 I started coaching with Morpeth Harriers and got 18 men up to international level with two at major games – one bronze medal (Mark Hudspith) and two men to the AAA 1500m final. With all these runners I never wrote down a schedule, but just talked my simple philosophy about “the big picture”.

Most seniors apart from a few in the Morpeth senior ‘A’ team choose to train now with other coaches like Lindsay Dunn, Gordon Surtees and David Lowes. They reckon I am not structured enough and while they know I won a few medals and broke a few records not one of them has sat me down and quizzed me to see what makes me tick, which I find strange.

In conclusion I say to all you aspirants, concentrate firstly on trying most of the races mentioned. Race 10,000m on the track more often and when you start to win national medals then look for sponsorship/warm-weather/altitude training.

Interestingly following on from the 1970s, Brendan Foster among other victories won the National Cross and had the fastest long leg time in the National road relays, as did Dave Bedford and Dave Moorcroft.

Then, in the 1980s, Steve Ovett – a miler – won the Inter-Counties cross country title and a half- marathon. Steve Cram was Northern senior cross country champion. Mo Farah runs a canny mile! There is a recurring theme I am sure. It will come to me.