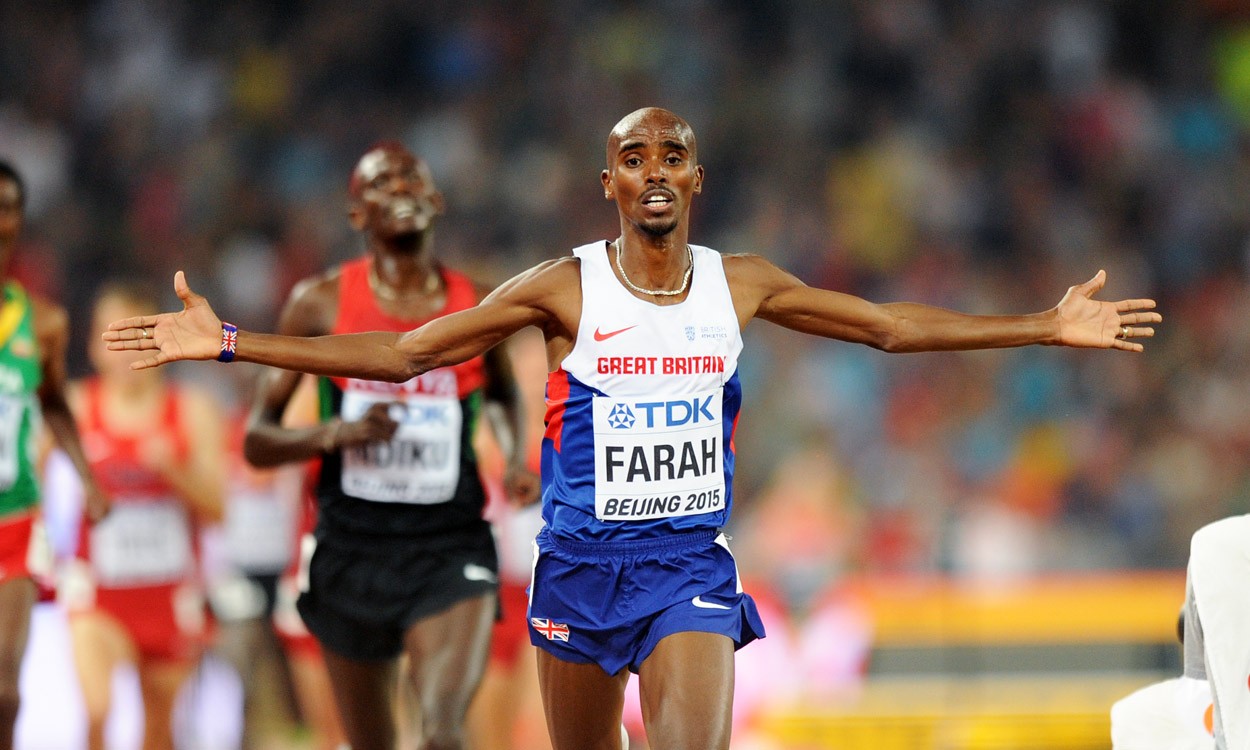 What has Mo Farah achieved, and what must he still do, to be considered Britain’s greatest athlete?

Greatness, true greatness, is a status that a select, very special few have achieved in sport.

The term “great” in sporting vernacular has become distorted in its overuse by commentators, broadcasters and pundits alike in their attempts to give added value and project a special meaning beyond what’s actually often just been achieved.

For someone’s status to be of indubitable, bona fide greatness, it boils down to the moments created. The individual achievement, while a hugely important factor in the making of a great, is just a fraction in the creation of one’s legend.

A victory, be it a single moment or sustained period of success can all be great in and of themselves, but it is in the context and narrative surrounding those successes which help to uplift someone for an “ordinary” great – an oxymoron if ever there was one – to the greatest.

So when Mo Farah was declared by British distance runner-turned-broadcaster Brendan Foster to be the “greatest sportsman” in British history, so shortly after winning his momentous “triple-double” of world and Olympic titles, there are so many more factors to be considered other than the weight of gold accumulated.

Farah’s titles alone give him his standing among the great British sportsmen and women, but can they alone make him the greatest? Well, there’s a whole lot more to it. Have a read of the below and then check out the September 10 edition of Athletics Weekly magazine, which can be viewed digitally here, for the full feature.

Winning is the ultimate measure of success. In any sport it’s a given, but even more so in a sport focusing on the individual achievements.

Before anything else, greatness is measured on triumphs. The ability to win on the biggest stages, when there is most at stake and, theoretically, your competition should be at the zenith of their powers, is a basic requirement for someone to be considered the greatest. And for the past four years, Farah’s ability to turn it on during the major championships is simply unparalleled by any British athlete.

In athletics, such is the ability to judge with quantitative evidence, not only is the victory of paramount importance in a great achievement, but so is the way in which is it done.

When Seb Coe was pressed on Farah’s greatness, he was a bit more reticent to eulogise over the man’s potential status at the head of the table of British sporting greats.

“He is a wonderful, wonderful athlete,” Coe said about Farah, quoted in the Independent. “I’ll leave the greatest ever tag to other athletes.

“Mo’s progress through the ranks has been spectacular, but there are other things you need to throw into the balance: world records, times, speeds, all those things.”

There’s no telling as to whether a stronger international field would help push Farah closer to the times run by Kenenisa Bekele or Haile Gebrselassie, but as it stands it’s the one key element of greatness missing from Farah’s argument.

The “I was there” factor, or ability to remember where you were at the point history is made, is a vital facet of anyone’s or any group’s legacy. Great feats are remembered in snapshots and soundbites. Every great champion must have their career-defining moment, and every career-defining performance must be remembered in the right way.

Whether you agree or not with the sentiments echoed by Steve Cram in calling Usain Bolt’s 100m victory over Justin Gatlin in Beijing, “He’s saved his title, he’s saved his reputation, he may have even saved his sport” is forever linked to that moment of history.

Cram’s transition into broadcasting and his capability when it comes to calling the spectacular and reproducing atmosphere is a great credit to his success as a broadcaster.

Only the most cold-hearted would fail to get goosebumps watching Farah streak to victory in the 10,000m in London 2012, and is in part down to Cram’s influence. It’s purely coincidental, but the creation of a moment is arguably as much down to who calls it as it is down to the sportsperson themselves.

Again, a matter of not just what you win, but how you do it. Plenty of greats in sport have gained their status but without the ability to dominate their respective opposition.

Farah has reached the point where he’s almost as big a banker of a gold medal as there is in athletics. There was genuine fear that Bolt would be dethroned in Beijing by Gatlin, but there was never any sense that Farah was stepping on to a track with anyone near his equal. And so it proved.

The best sports stories, the ones which invoke the kind of emotion fitting of an Oscar-nominated biopic, see the protagonist overcome adversity, swimming against the tide in order to succeed. The story of the “Super Saturday” triumvirates’ trials and tribulations from the 2008 Olympics – the topic of an AW feature in the August 20 World Championship preview edition – maps each of Farah, Greg Rutherford and Jessica Ennis-Hill’s heartache from their previous experience of competition – or lack of in Ennis-Hill’s case – in the Chinese capital prior to glorious redemption in the World Championships.

In Farah’s case, he came to Britain aged just eight from the impoverished, war-torn Somalia, split from his twin brother Hassan, who told the Daily Mail three years ago of the pain in losing “the other half of myself.” Fast-forward to the 2008 Olympics, Farah’s failure to reach the 5000m final in his first experience of running on the grandest stage is still what he considers the biggest disappointment of his career.

To become world champion in the very event of his torment three years later, and to follow that up with two Olympic golds, is the kind of “zero to hero” tale which helps to fuel the legend.

» This is a version of a four-page news focus feature published in the September 10 edition of Athletics Weekly magazine, which can be viewed digitally here