A quantum leap for Christian Taylor 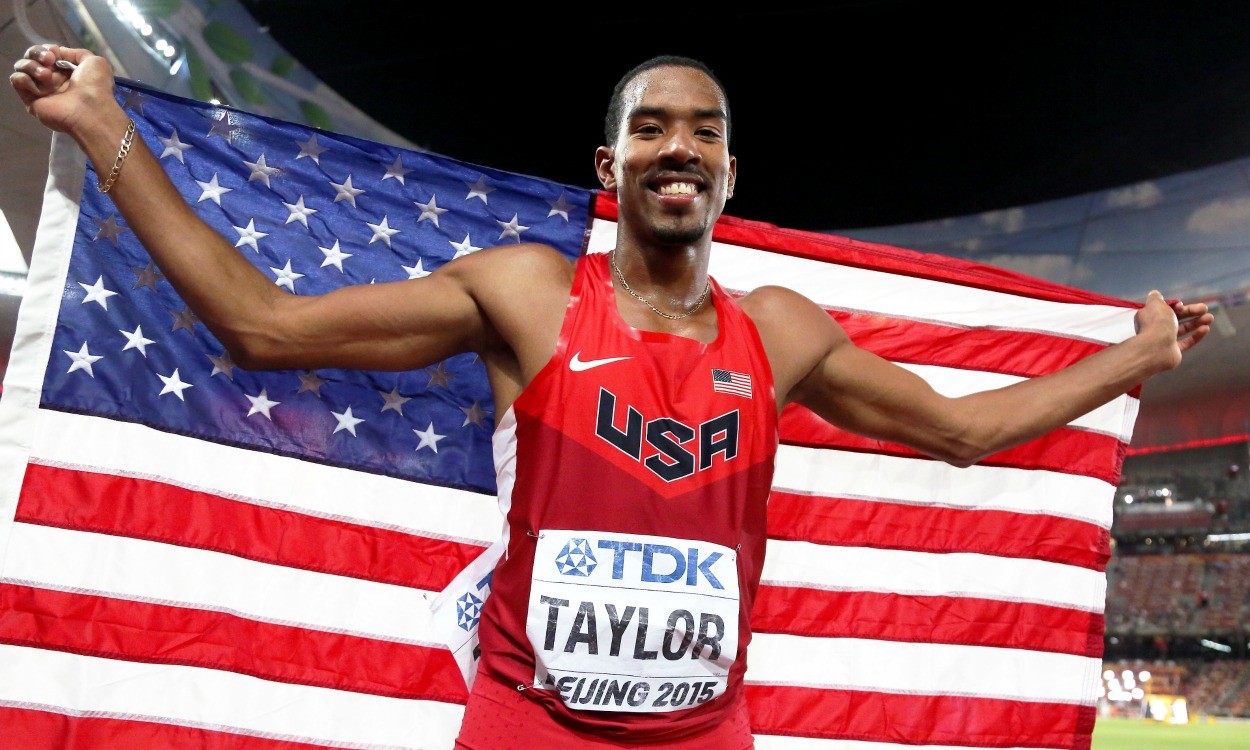 At the Monaco Diamond League this year, a journalist tweeted her frustration that a delayed flight had caused her to miss Christian Taylor’s press conference. The athlete tweeted back: “Catch me in the lobby and I’ll be happy to answer your questions.” It was typical of the man who is not only the world’s greatest triple jumper but a thoroughly nice guy.

When Taylor jumped 18.21m to win the world title for the second time, he established himself as the outstanding triple jumper in the post-Jonathan Edwards era. He was not only adding the world title to his 2012 Olympic title, but also recording the second longest jump ever and setting an American record.

Taylor recalls as a child always having a certain spring to him. He was always jumping off the stairs or off a couch. As a schoolboy soccer player, his forte was jumping to head goals from corner kicks. Now he has been able to earn a living from jumping.

In 2007 at the age of 17 he won the IAAF World Youth Championships in Ostrava with a jump of 15.98m, also taking bronze in the long jump. He recalls: “Getting in USA gear and getting to travel internationally was huge.”

It encouraged him to take the triple jump more seriously.

He had another breakthrough year in 2011 when he won his first US title and followed that by winning the world title in Daegu, Korea, where he jumped a massive 17.96m. His reaction was typical. He said: “The distance surprised me. As an athlete, I am out there to win so the win did not surprise me. The distance did. For something like that to happen was just a blessing.”

“As an athlete, I am out there to win so the win did not surprise me. The distance did” – Taylor after his World Champs victory in Daegu in 2011

For someone who grew up in Georgia and went to university in Florida, Taylor took a very courageous step in 2012. When his coach, Rana Reider, took up a post at the British Athletics National Performance Institute in Loughborough, Taylor decided to follow him.

Typically, Taylor was quick to take a positive out of negative. He said: “First of all I am grateful because many people don’t get the opportunity to see the world. So I always count my blessings before going into anything else. It was tough but if you move up, you have to make sacrifices. I left my family, my sister and my girlfriend – that was a big hit for me. Sometimes you have to make tough calls. But it was best for my career and it is showing now – so I am grateful for it.”

Then when Reider moved to Netherlands, Christian, Tiffany Porter and Shara Proctor, to name but three, moved with him. Taylor was very positive about this move too.

“We are training at the Olympic Centre, Papendal in Arnhem, which is a very special place because of the people there, the energy and the atmosphere,” he said. “I never got a chance to go to Chula Vista or Colorado Springs in the US but to be at an Olympic Centre, around people with the same vision, the same motivation, same way of thinking is great. There is a big board outside the centre saying the number of days to Rio, which helps on days when you don’t feel like training.”

In 2014, Taylor made another brave decision. He switched legs. Having always jumped with his left leg, he switched to the right. “I was having a lot of pain in my knee but I wasn’t going to let it stop me,” he said. “When I told my coach of my plan, he said it was very unlikely that it could happen. But, I felt that, if you have that push behind you, you are not going to let anything stop you. When your back is against the wall you have to fight it or lie down so I decided to take the challenge.”

For most of 2014 he was jumping off a shortened run-up, fearful that his “wrong” foot would not be able to cope with the speed generated by his full run-up. He said that physically, jumping off the other foot was no big deal as jumpers do it in practice all the time. The challenge was getting the timing right and coping with doing it at full speed and finding the courage to commit to it 100%. He describes the process as “being comfortable with being uncomfortable”.

The breakthrough came at the 2014 Zurich Diamond League when he jumped 17.51m off the new leg. He knew then that it would work. He adds: “I am so grateful because I know my career could have ended last year.”

Earlier this year, Taylor represented USA in the 4x400m in the IAAF World Relays in the Bahamas. Does he have ambitions of repeating that? He said: “I could dream and say it would be wonderful to do that at the World Championship or Olympics, even in the qualifying round, but to represent the US on foreign soil ticked off another one on my bucket list and I’m just glad I got the opportunity – even if it was because most other 400m runners had not opened up their season – but it is a memory I will cherish the rest of my career.”

The question Taylor has been asked most often this year is when he will break Jonathan Edwards’ world record. He always replies with characteristic modesty, reminding the questioner that’s why the record has lasted 20 years. “I can’t stress enough how much respect I have for the distance,” he said. “The reason it has stood so long is that it is a phenomenal distance. I can’t speak about that without talking about the respect I have for the man and the distance.”

Before the World Championships, he spoke of needing “everything in alignment – the perfect wind, the perfect competition and competitors are going after it”.

Maybe, but one would not bet against Taylor pulling it off in 2016.