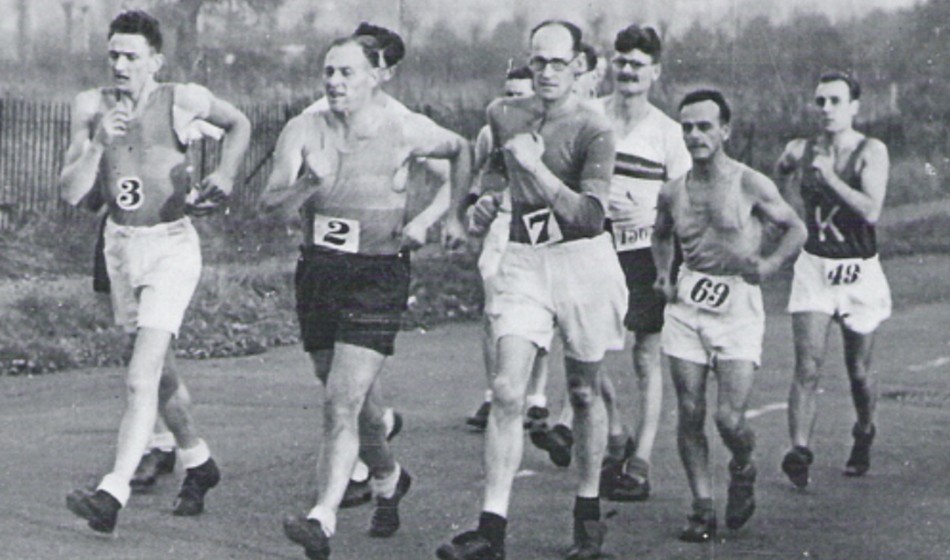 Race walkers are encouraged to submit their memories of the Enfield Open Seven ahead of what should have been the centenary event next month.

The inaugural race took place on November 13 in 1920 but is one of the many events cancelled this winter so far due to the coronavirus.

The event is the last of the renowned “Open Seven Series” – the Leicester, Highgate, Enfield, Belgrave, Cambridge and Metropolitan races – which ran through from October to January and underpinned the Race Walking Association programme during a period that saw Britain produce race walkers such as Olympic champion Ken Matthews, Harold Whitlock and Don Thompson.

Matthews and Whitlock are among the race walking ‘who’s who’ who have competed in the event. Other competitors over the years include Paul Nihill, Vicky Lupton and Callum Wilkinson.

The photograph above, for example, shows action from the 1947 race won by RA West (far right, No.49) from Fred Redman (150) and Jack Rutland (7) as only eight seconds covered the first three.

Organisers welcome anyone has taken part in the ‘EO7’ to walk for either 7min, 7km or 7 miles and send memories to Ron Wallwork via [email protected] or at 35A Newmarket Road Moulton, Suffolk, CB8 8QP so that a centenary souvenir booklet can be made.

Wallwork says: “Fierce four-to-score team competitions, along with countless personal rivalries and the striving for a PB has been the feature of the event’s long history and, binding it all together, tremendous camaraderie.”