Ugandan bounces back from 10,000m disappointment to land his first major title over shorter distance at the Tokyo Olympics on Friday

Joshua Cheptegei went into the 5000m final as the world record-holder, Olympic 10,000m silver medallist and the world 10,000 champion but very few experts thought he had a chance of winning over the shorter distance, having been a well-beaten sixth at the Florence Diamond League in a race won by Jakob Ingebrigtsen’s European record of 12:48.45.

The Ugandan defied those expectations, however, as he took gold over 12-and-a-half laps in Tokyo with a masterful piece of controlled running of which his predecessor as Olympic 5000m champion, Mo Farah, would have been proud.

There was no sign of the heel injury which Cheptegei claimed had hampered him in the 10,000m final and, after losing in that slowly run 25-lap encounter, the Ugandan obviously thought he would benefit from a true-run 5000m, moving to the front and completing the first lap in a fast but controlled 63.2.

Cheptegei went back ahead but the pace slowed through that third kilometre as he led in 7:55.25. Despite the pace and the heat, 15 of the 16 finalists were still in contention with only Kiplimo’s stepbrother Oscar Chelimo struggling – the one surprise being that he made no effort to help his faster team-mates just as Stephen Kissa sacrificed himself in the 10,000m.

After eight laps of Ethiopian control, Kenyan Nicholas Kimeli went ahead and picked the pace up a little and as he went through 4000m in 10:32.4, with only 10 athletes remaining in contact. It was down to a Kenyan, an Ethiopian, two Canadians, two Americans, two Ugandans a Bahraini athlete and a Spaniard.

The latter came in the form of Mohamed Katir, who has set Spanish records over 1500m, 3000m and 5000m and was the big favourite but he was blowing at the back of the group and did not look comfortable.

The Ugandan’s bell time was 12:03.1 and right behind came Kimeli, Rio runner-up Paul Chelimo, Kiplimo, Birhanu Balew and Mo Ahmed as Ethiopia’s Milkesa Mengesha also fell away and the battle for gold was down to six.

Cheptegei kept the 13.9 pace along the bend and upped it to 13.5 along the back straight but the other four were still in contention. Gradually the Ugandan’s pace was telling and he hit the final straight a few metres ahead after a 13.7 on the bend. Kimeli, Chelimo and Ahmed were simply not going to get on terms as Kiplimo and Balew dropped back.

“I’m honoured to be a world record-holder and Olympic champion as well,” he said. “After my silver medal for 10,000m I am happy and proud to take this golden medal for 5000m and a great Olympics for Uganda. It’s really a great moment and I regretted my mistake at 10,000m and my dream has been fulfilled here in a a beautiful evening.”

Katir, who many people thought would be running a blazing last lap of around 53 seconds instead ran a painful 61.5 and struggled home in eighth. 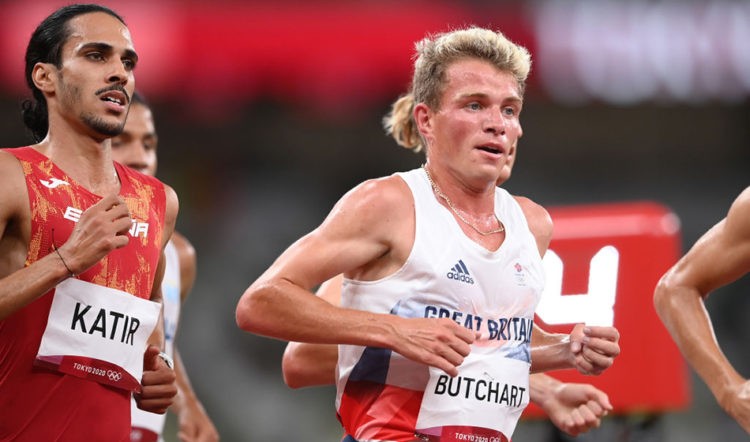 He said: “It was hard, that one – those boys were fast. I wanted to do better than that but I can’t really complain it was a hard, hard run and I’ll take that.

“It was fast and hard. I didn’t think it would go out from the gun considering the weather outside but hats off to those boys, they pushed it and I couldn’t keep up the pace.

“I wanted to do better than that – I want to always compete, tonight I didn’t really compete I was just in the race. So I am disappointed with that, but to say I’m a double finalist in the 5000m for Britain and that is pretty rare so I have to take the positives from it.”

He finished just ahead of Luis Grijalva’s Guatemalan record of 13:10.09.