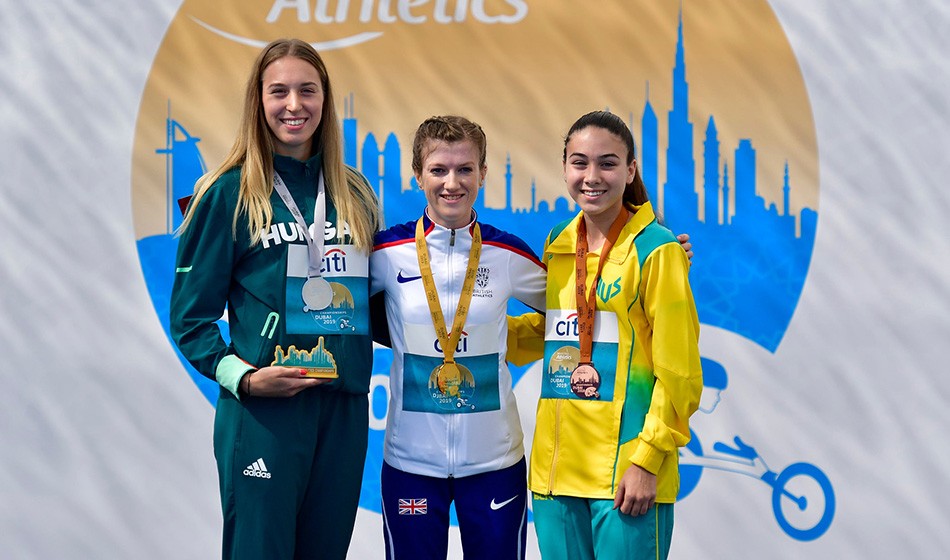 Sophie Hahn had not raced 200m all year but she stormed to gold in the T38 event in a world record of 25.92 on Wednesday at the World Para Athletics Championships in Dubai.

It was the Briton’s second title of the week – adding to the 100m gold she won the previous day – and the seventh world title in her career so far.

“That was absolutely incredible,” she said after clipping one hundredth of a second off her own world record. “I have no idea where that world record came from. I didn’t think I could run it for 200m so it’s really surprising. It’s been a perfect couple of days.”

The 22-year-old was helped by a small tailwind of 1.2m/sec and added: “I got out hard I’ve been working a lot on coming off the bend fast. I’m glad the hard work has paid off. To match what I did in London (two years ago) is incredible,” she added on retaining her title.

As in the T38 100m, Hahn was followed home by runner-up Luca Ekler of Hungary and Rhiannon Clarke of Australia (pictured above).

Jason Smythe, the world’s fastest para-athlete, broke his own championship record in the T13 100m with 10.54. It was the visually-impaired Irish sprinter’s seventh world title.

Chinese wheelchair racer Zou Lihong won her fourth gold of the championship in the T54 5000m with 12:12.73 as Prawat Wahoram of Thailand beat a strong field to win the men’s T54 5000m in 10:33.00 as Marcel Hug was a close second and recent New York City Marathon winner Daniel Romanchuk fourth..

Markus Rehm, one of the world’s best known para-athletes courtesy of his 8.48m T64 world long jump record, won his event for Germany with 8.17m as Mpumelelo Mhlongo of South Africa set a T44 world record of 7.07m in third.

Earlier in the day Britain’s visually-impaired sprinter Libby Clegg was disqualified from her T11 200m semi-final but said she was pleased to get back into championship action after giving birth to her first child seven months ago.