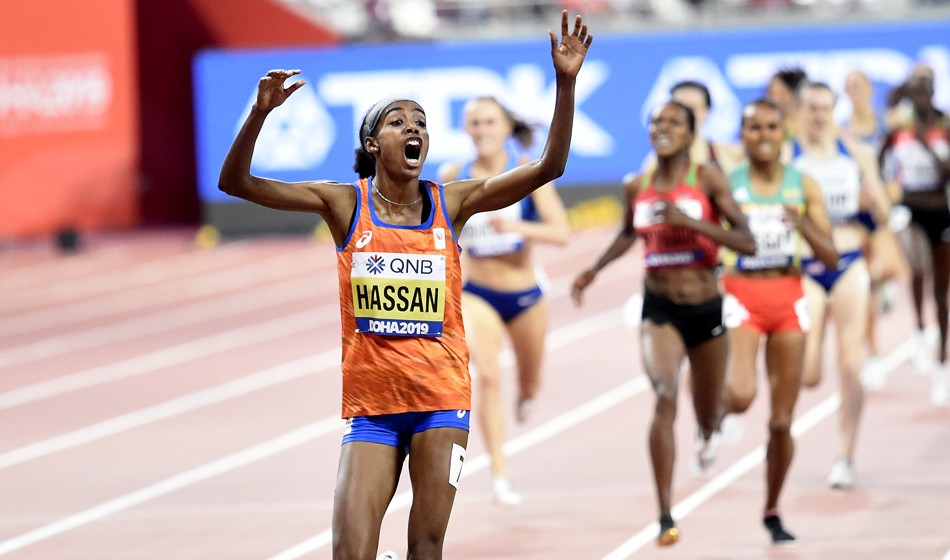 The dust may still be settling on the Khalifa Stadium track.

Unpredictability goes with the territory when it comes to 1500m racing but no-one expected Sifan Hassan to do this.

The Dutchwoman, already with the world 10,000m gold medal tucked safely away, stunned onlookers – and her opponents – when she hit the front of the 1500m final after around 300m and jammed on the accelerator.

The 26-year-old has found herself in the eye of a storm this week due to her links with disgraced coach Alberto Salazar but running incredibly quickly was all that appeared to be on her mind on the penultimate night of these IAAF World Championships as she scorched away from the chasing pack to clock a time of 3:51.95 which shredded almost seven seconds off the championships record of 3:58.52 set by Russia’s Tatyana Tomashova in 2003.

Eight women in total ran faster than that mark, in fact, as defending champion Faith Kipyegon set a Kenyan record with 3:54.22 for second place, with Ethiopia’s Gudaf Tsegay clocking a personal best 3:54.38 in third. The winning margin was the biggest in world championships history.

Shelby Houlihan’s North American record of 3:54.99 was only good enough for fourth, while Britain’s Laura Muir could not have given more off the back her calf injury to run 3:55.76, only narrowly outside her British record of 3:55.22, in fifth place. The Scot’s training partner Gabriela Debues-Stafford set a Canadian record in sixth with 3:56.12.

“Fifth with 3:55!” said Muir after recording the second-fastest time of her career. “I couldn’t do any more than that!

“I’m actually really, really happy. I know it’s not a medal which is what I would have wanted but to run 3:55 … and to be fifth – well that’s unheard of! I am proud of myself to run that sort of time off the training that I have done.

“I never thought I was in that sort of shape. So yes to do that off that training gives me confidence to know that, when 100%, well how fast can I go?

Debues-Stafford had led out over the early stages but Hassan made her intentions clear after three quarters of the opening lap, moving to the front to take charge and at the head of affairs through 400m in 1:03.51.

The pace went up, 800m being reached in 2:05.92 as the group tried to adjust, and Muir moved up from her early spot at the back of the pack into second place alongside Kipyegon and Tsegay with around 500m to go. The bell sounded at 2:52.61 and it became a straight burn up for the line, but Hassan extended her stride length and her lead with a sub-60 last lap to complete an unprecedented IAAF World Championships double of 1500m and 10,000m.

Laura Muir happy with her 3:55.76 for 5th in the red-hot world 1500m final in Doha after an injury-hit build-up. #WorldAthleticsChamps pic.twitter.com/vwHO95Y6kY

“This is amazing for me,” she said. “This is such an honour. I’m showing what you can do with hard work. It was amazing when I crossed the line and I saw that time. I was so happy.”

After the past few days, which have seen her without a coach following Salazar’s ban, she added: “It was a hard week for me. I was just so angry with what people were saying. I’ve worked so hard to be on top over the years.

To those who might doubt the validity of her performances, she added: “I would say I’ve been on top since 2014, before I joined the Oregon Project. I am clean. I do my best. If they want to test me they can test me every single day.”