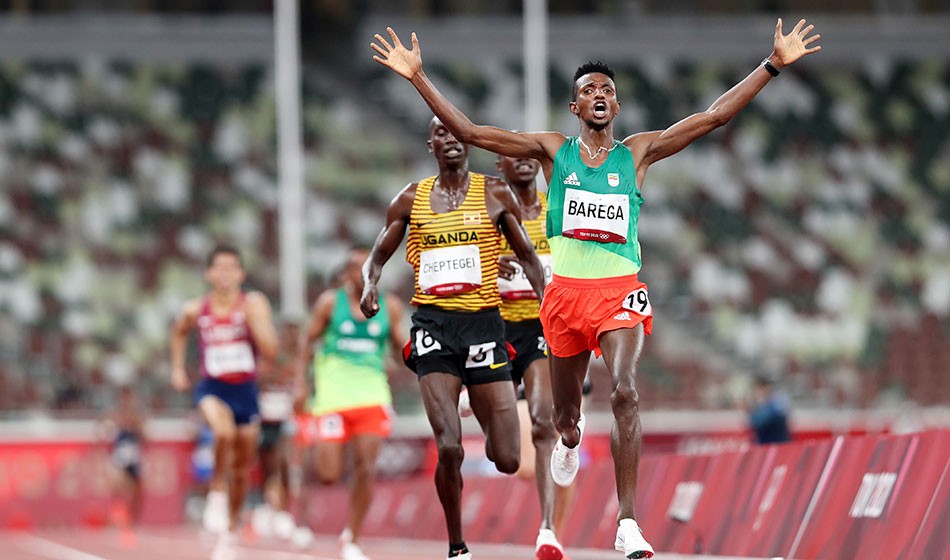 If the first athletics final of this Olympics is a sign of things to come, then Tokyo is going be truly memorable.

Selemon Barega emerged victorious from a fascinating men’s 10,000m battle at the climax of the opening day of track and field competition in the Japanese capital to join an illustrious list of Ethiopian champions in this event, holding off the late charge from the Ugandan duo of world record-holder and world champion Joshua Cheptegei and Jacob Kiplimo.

Barega’s winning time of 27:43.22 might not have been particularly remarkable in what proved to be a tactical affair but the 21-year-old judged his closing effort to perfection as a final lap of 53.94 proved just enough, with Cheptegei clocking 27:43.66 and Kiplimo 27:43.88.

“It’s very well known that we have been winners in the 10,000m competition,” said Barega, who didn’t rule making an attempt at the 5000m as well. “Since Kenenisa won [in Beijing 2008), we have been unable to achieve a gold medal. I feel really proud.

In the absence of two-time winner Mo Farah, there was always going to be a new distance king crowned but, on what was a stiflingly hot and humid night, it would be no easy task – even for a field of the very highest quality.

The race started in surprising fashion as Ugandan Stephen Kissa shot out to an early lead of around 40m but was left to his own devices as Kiplimo led the rest of the field and pre-race favourite Cheptegei was content to loiter at the back.

Kissa had established a seven-second gap as he covered the opening kilometre in 2:44 and it wasn’t until he reached 2000m in 5:34, holding an advantage of nine seconds, that Barega decided to begin hauling him in.

Kenyan Rhonex Kipruto, a late call-up for the injured Geoffrey Kamworor, pushed too as the pair broke away from a chasing pack which was headed by Kiplimo and Cheptegei.

Kissa’s lead was just three seconds after reaching 3000m in 8:23.00 but, now that the sizeable gap had closed, the rest of the field remained content to let him stay out in front and Barega duly dropped back.

Kissa was still in the lead as halfway was passed in 14:08.6 but the whole field was now back together and plotting their next moves in this developing game of running chess.

“It was a sacrifice for the team,” explained Kissa of his early approach. “We had a plan for me to go ahead to make it a fast race. I thought they were going to follow me but when I looked round they were not there. My team-mates stayed behind – they couldn’t do it.

“We were planning for the gold but unfortunately we have a silver and bronze. But I’m happy. We have two medals.

“Maybe next time someone else will sacrifice themselves for me.”

The long-time leader’s race was eventually run after 6000m as he stepped off, with Kipruto having eased into the lead, tracked by Cheptegei as Frenchman Morhad Amdouni – winner of the European Cup in Birmingham in June – entered the fray and the queue of contenders began to form.

Part of the beauty of 10,000m racing are the ebbs and flows of the pacing and Cheptegei appeared to surge with 2000m to go as he was carefully watched by Canada’s Mo Ahmed, with Barega one second back but in eighth place at this stage.

With four laps remaining the pace slowed at the head of affairs as the jostling for positions began, a sizeable group of athletes all still well in contention and the Ethiopian duo of Barega and world silver medallist Yomif Kejelcha ominously placed.

That group was seven-strong at the bell, the point at which Barega made his bid for glory, pulling his way clear of the pursuing Ahmed and Kejelcha. Cheptegei and Kiplimo quickly became the closest challengers but, as the leader began to falter, simply couldn’t close the gap.

Cheptegei, who has been dealing with an Achilles problem, said: “I have two feelings. One is that I’m very happy to have won an Olympic silver medal and I would say that this is really special for me as a world record-holder and as a world champion. But the other side of me is really not satisfied with the result because I came here expecting to win a gold, but you never know how someone has prepared and you just have to be grateful.”

He added: “My plan was just to see the last three laps or the last 2km and try to push, but still I was not really feeling comfortable with my tendon, and I was just saying that maybe I need to consider health first rather than to break myself and go out for a long time. I felt that I just needed to follow the pace, not to attack early.

“I was also saying that if I keep it to the last sprint, I might even lose it. So it was really difficult for me and different.” 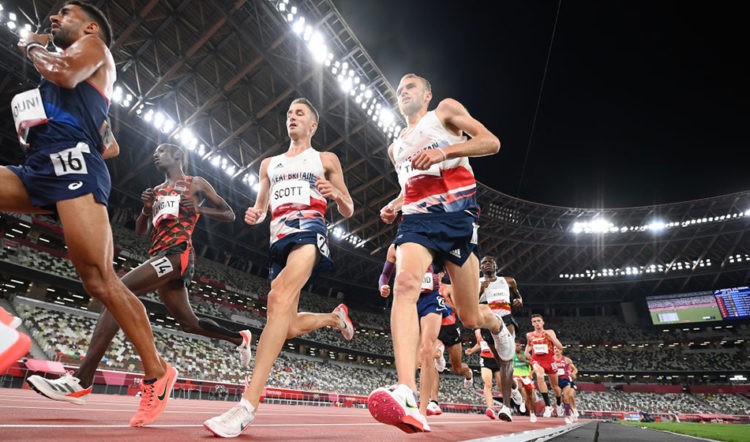 From a British perspective, Marc Scott was 14th in 28:09.23, while Sam Atkin stepped off the track at the halfway point with an Achilles problem.

“It said it was 30 degrees on the track and just felt even hotter than that,” said Scott of the conditions. “Going into the race you feel good, you feel good, the laps go by and you’re still feeling good, and then just bam, it hits you pretty hard and it’s over the last mile where I’ve struggled a lot more than I thought I would.