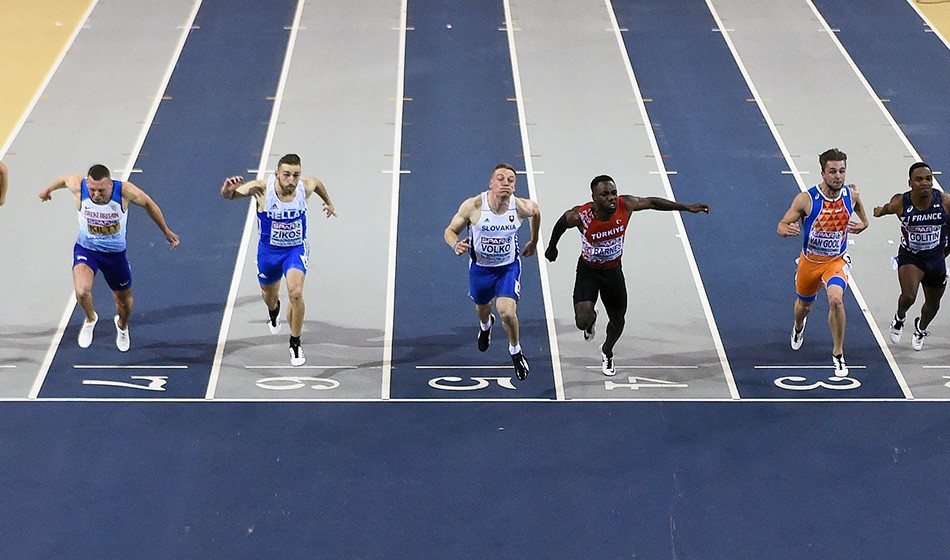 Richard Kilty’s rollercoaster ride to the European indoor 60m final ended in disappointment as he finished fourth in a race won by Jan Volko.

Still struggling with Achilles trouble six months after career-saving surgery, the Briton put up a bold defence of his title on home soil, but gold went to Volko of the Slovak Republic as Kilty finished just outside the medals, while GB team-mate Ojie Edoburun wound up seventh.

Volko finished runner-up to Kilty two years ago in Belgrade. But the defending champion was not at his best as he clocked 6.66 on Saturday night at the Emirates Arena behind Volko’s 6.60. Emre Zafer Barnes of Turkey took silver in 6.61 and Joris van Gool of Netherlands bronze in 6.62.

Kilty’s build-up to the championships was full of drama. After being left out of the British team for the event despite being a two-time and defending champion, he was given the lifeline of a wild card selection by European Athletics.

Yet in race week his mind was willing but his body struggled. “I had a big issue on Monday where I had to have water drawn out of it,” he said, pointing to the left ankle which was operated on last year.

“I couldn’t train for six days before this. I only trained yesterday and the day before. It’s far from perfect but I’m making do with what I’ve got and hopefully in the next couple of months it’ll improve and I’ll feel nothing.”

It is the latest chapter in an amazingly eventful indoor athletics career for Kilty. In 2014 he was third in the British Championships and not picked for the World Indoor Championships in Poland but he replaced an injured James Dasaolu and went on to win global gold.

In 2015 he missed the national championships and was given the third place in the GB team for the European Indoors in Prague – and went on to take the title. Then, in 2017, he was disqualified in the British Championships final and came third in the annual grand prix in Birmingham before successfully defending his European title in Belgrade.

On to 2019, he was just sixth in the British Championships but improved to run a season’s best of 6.63 in Birmingham – inside the European Athletics standard but outside the British Athletics qualifying criteria.

With a PB of 6.49, an immaculate international indoor championship record and seemingly improving with every race, he gained a lot of support from fans favouring his selection and led to European Athletics making an unprecedented decision to allow him to run.

The 29-year-old added: “A medal would have been great but my aim for the last couple of months has been to win this. Fair play and respect to Jan Volko – he got silver last time – but it’s a shame I wasn’t at my best.”

Edoburun has been caught in the crossfire of the selection controversy and was pleased to reach the final but a little disappointed to finish seventh in 6.67. He said: “I wasn’t on the selection panel. It was just doing my own thing here. I know I’m a quality athlete. It just didn’t come out here tonight, but that’s sport. Sometimes it’s your day and other times it’s not.

“I’m really confident and looking forward to the summer, fixing things technically, getting to Doha, improving my 10.04 PB and getting under 10 seconds. That’s my main aim this year and the championships here is just a stepping stone.”

Kilty also aims to be back stronger than ever this summer and is also in search of an elusive sub-10 clocking for 100m.

Defending champion Asha Philip was forced to settle for bronze in the women’s 60m final after Ewa Swoboda upgraded her silver medal from two years ago to take the title. 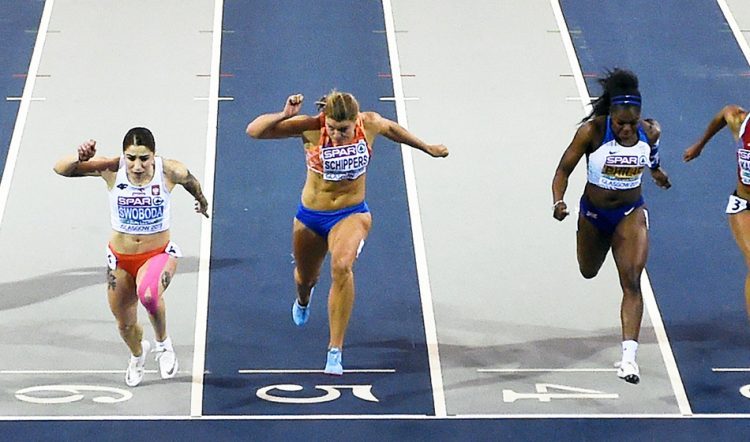 The 2017 European under-23 champion from Poland had been fastest in the semi-finals and was first to the line again, clocking 7.09 ahead of the Netherlands’ two-time world champion Dafne Schippers (7.14) and Philip with 7.15, which was the same mark awarded to fourth-placed Kristal Awuah – a personal best for the 19-year-old.

“I’m still grateful that I’ve come back here and won a medal,” said Philip. “Obviously I wanted to win gold and retain my title, but you know that’s what happens in a final. It was a very messy race, but I kept my composure and I was still able to get a medal.”

Awuah added: “Everything has come so quickly and I’m amazed with how quickly I’ve improved over my 60m. I’m looking forward to getting quicker and stronger.”