Repeat performance for Cindy Sember as Jodie Williams doubles up 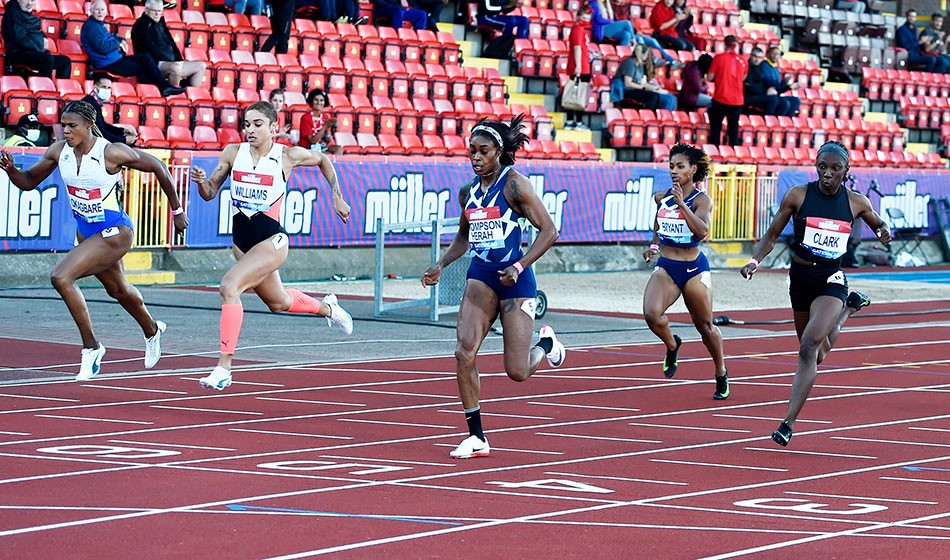 Olympic fourth-placer Cindy Sember obviously likes Gateshead as she followed up her May win at the track with one of the best 100m hurdles victories of her career at the Müller British Grand Prix.

Hurdling crisply, she gained some notable scalps as she won clearly in 12.69.

Payton Chadwick, only seventh in the US Championships, was a surprise second in 12.75 and European Indoor champion Nadine Visser (12.78) edged third ahead of former world champion Danielle Williams (12.78) and world junior record-holder Brittany Anderson (12.81).

Sember said: “I’m so happy and happy to execute my performance. I had an iffy British trials [coming third] and it’s good to come back and show my form.”

A high quality women’s long jump did at least go to the best jumper rather than the athlete who has the best final round.

World silver medallist and European Indoor champion Maryna Bekh-Romanchuk  jumped 6.77m/-0.1 in the fifth round and then 6.67m/0.3 in the final round.

They did not make the first three but Jazmin Sawyers (6.62m/0.5) and Abigail Irozuru (6.60m/0.0) both came within five centimetres of qualifying for the last three.

World heptathlon champion Katarina Johnson-Thompson’s return to long jump competition did not go as planned in terms of distance but she got five jumps in and there was marginal improvement as she jumped 6.07m in the first, 6.08m in the third and 6.10m in the fifth round to finish eighth.

She said: “That proves that I’m 100 per cent fit. Mentally it’s tough. It’s a challenge and I was pleased to get five jumps in and I need to think about my technique rather than my Achilles. I’m improving every week and I can see improvements on the clock.” 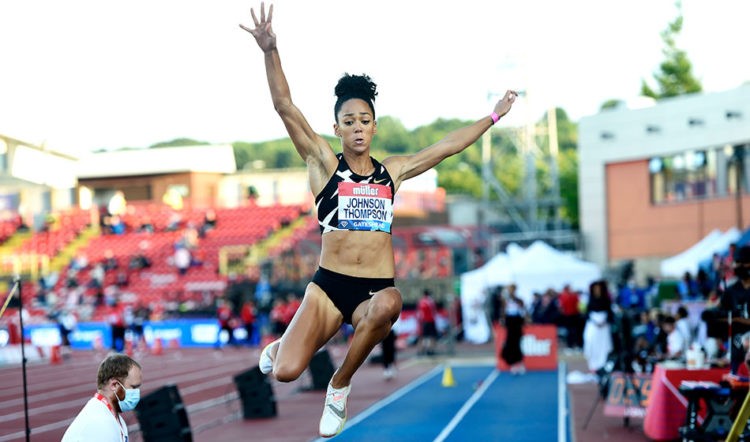 Bol said: “It was nice that this time I was out in front of Shamier (Little) so it was mentally different because the other two times I have been chasing. That was a really good exercise especially with Tokyo on my mind.

“I am really happy to run that time and, of course, I will take the win against such a strong group of girls. I couldn’t have had a better preparation for Tokyo and I cannot wait now.”

The women’s 200m saw a clear win for double Olympic sprint champion Elaine Thompson-Herah (22.43).
Jodie Williams finished superbly and her run of 22.60 was her fastest time since finishing second in the 2014 European Championships. A late surge helped her overtake Blessing Okagbare (22.61) and Tamara Clark (22.62). Beth Dobbin finished fifth in 22.92 and Daryll Neita got in some overdistance work, setting a PB of 23.06.

A hour after her 200m, Williams returned to run the 400m. She stayed well back from former world medallist and Commonwealth champion Stephenie Ann McPherson, who looked a class apart in the first 300 metres but slowed in the last 50 metres to win in 50.44.

Williams ran down everyone else and finished full of running, clocking a very encouraging time of 50.94. Nicole Yeargin was fifth in 51.77.

A delighted Williams was able to reflect on the best ever 200m and 400m double by a British female athlete.
“Tonight has been great,” she said. “This year I’ve really just been trying to put myself in uncomfortable positions. I did it all through winter, all through indoors. I’ve tried to double up wherever I can and really push myself because I know when I’m standing on a final start line at the Olympic Games it’s going to be uncomfortable.

“I’m seeing the results really paying off, coming out here and competing in world-class fields and coming in top positions. I’m really happy with how things are turning out. It’s rare that I say that I’m proud of myself honestly, but this year has been a massive turning point for me.

“I’ve been an athlete that’s been in every situation; I’ve been a winner, I’ve been someone that doesn’t perform when they were supposed to. I’ve learnt so many lessons so now when I stand on a start line I feel like I’m prepared for anything that’s thrown at me. I feel like I’m a mature athlete now.”

Had double world champion and world record-holder Sifan Hassan not withdrawn from the mile then the fans would have witnessed a world record attempt but instead they got a relative three-lap jog followed by a last-lap burn-up.

While Hassan did not grace the event, Kate Grace did and the in-form American who sadly did not make the US team won with a fast last lap.

The pacemaker Aneta Lemiesz opened with a 66.79 400m before Chanelle Price took over at 800m (2:17.07). Realising that no one was interested in the pace, Price went longer than planned and she was still ahead at 1200m in 3:24.54. Then Grace eased away, covering the last lap in just over 60 seconds. Her winning time was a world-leading 4:27.20 only because this is the first major international mile of 2021.

Kate Snowden, who will be in Tokyo, ran a cautious race but finished strongly as she squeezed through in lane one to snatch second in 4:28.04 ahead of German Helen Schlachtenhaufen’s 4:28.13.

Netherlands may have missed Hassan from the Mile but they did win the 4x100m. After Dafne Schippers completed the second leg they were marginally behind Britain, who got a good start from Asha Philip and Imani Lansiquot.

Beth Dobbin lost a little ground on the bend and Daryll Neita was closing down the straight but the Dutch held on to win in 42.84 from Britain’s 42.92, a highly encouraging performance given with Dina Asher-Smith to come into the team. An All-Stars team finished third in 43.45.

In the women’s pole vault, three-time global silver medallist Sandi Morris won thanks to a 4.76m clearance.
She only got over 4.71m at the second attempt but a first-time clearance at the higher height sealed victory.

The winner, who had to borrow poles in her last competition, said: “I jumped on my own poles today! It’s the struggle of every international pole vaulter! It’s just so hard to get around the world with poles and it’s getting significantly more difficult each year but I’m very fortunate that they finally made it today and the weather held out, the sun came out and it ended up being a beautiful day.”

British record-holder Hollie Bradshaw was not at her very best, only getting over 4.61m at the third attempt and 4.71m at the second but she passed 4.76m when Morris cleared and failed her three attempts at 4.81m.

The British double Olympic finalist was pleased with her night’s work, though. “I have been struggling the last couple of weeks off the back of that 4.90m [her British record] – not mentally, but I’ve lost my way a bit with some technical elements. We brought it back to basics today and went for smaller poles like I would in training. I’ve really learnt a lot and I started jumping really well towards the end.

“I needed this confidence boost and I needed some reps under the belt to help me feel my jump. I can now go and train with confidence for the next couple of weeks and really get those jumps down.”

Finland’s Wilma Muro was third with 4.61m, while Britain’s European under-23 medallist Molly Caudery set a season’s best of 4.51m in fifth.