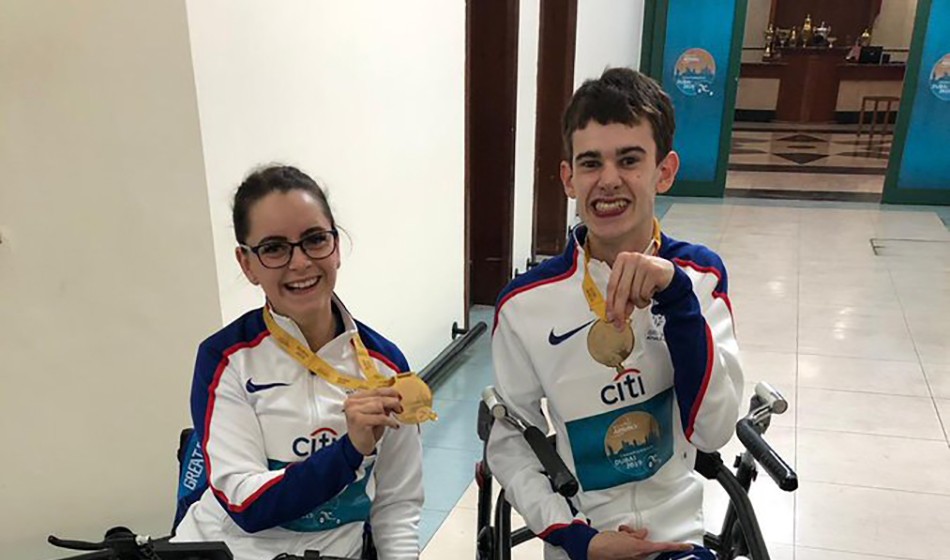 Kayleigh Haggo and Gavin Drysdale (pictured) struck gold for Britain in the new Race Running discipline at the World Para Athletics Championships during the final session in Dubai on Friday.

It means Britain ends the championships with 13 gold medals and 28 medals in total as China topped the medals table with 25 golds and 59 medals altogether from runners up Brazil.

Haggo and Drysdale won titles in the RR3 100m category for the Race Running event which was making its debut at these 2019 championships.

#ICYMI: earlier tonight @kayleigh_haggo is crowned the first ever world champion in the 100m RR3 final. @ParalympicsGB #Dubai2019 #ParaAthletics
Brought to you by @BP_plc pic.twitter.com/ric6Qt5SJ0

Athletes in the category use a ‘Race Runner’ which is a three-wheeled frame where the athlete’s body is supported.

“Wow, I cannot believe it. I knew I would probably have to break the world record to win it,” said Drysdale. “I want to dedicate this gold medal to my late coach, Janice Eaglesham. She would have been so proud.

“It is absolutely amazing to have race running in the world championships for the first time. It gives the opportunity for people like me to compete at the highest level. I remember watching London two years ago wishing I could compete, so to be here two years later is a bit surreal.”

Haggo, who is only 20, beat team-mate Simpson and said: “My start wasn’t very good so after that I just had to run fast and put my head down. To represent Great Britain is amazing and to represent them and do well is a great honour.”

Ihor Tsvietov of Ukraine won the T35 men’s 100m in 11.77 as the top three all broke the former world record and Britain’s Jordan Howe was sixth.

⚡fast!
Can you believe that the top three in the men's 100m T35 were all under the world record?! #Dubai2019 #ParaAthletics