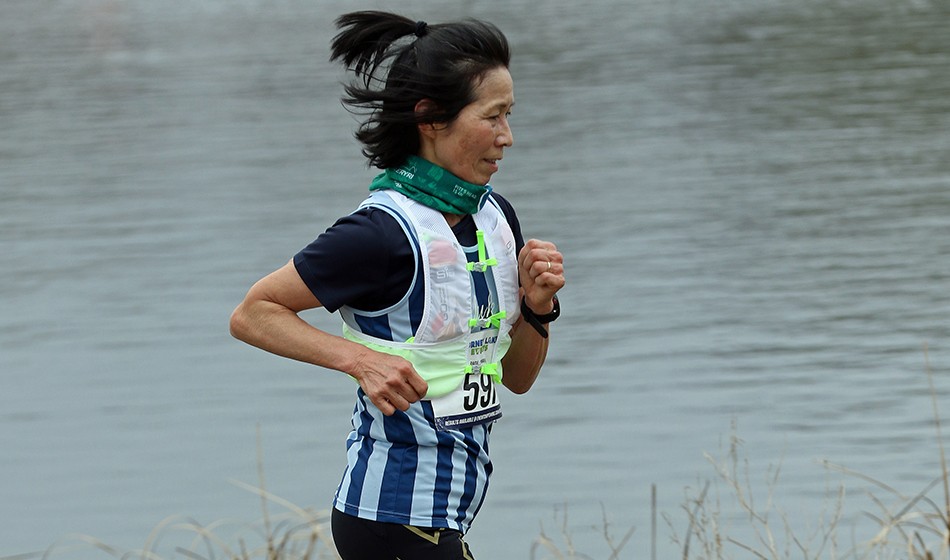 Yuko Gordon already has a claim for fame in world women’s marathon running. She took part in the first-ever Olympic women’s marathon 37 years ago and she also ran in the inaugural World Championships in Helsinki in 1983 – on both occasions representing Hong Kong.

However, her run in Dorney – near Windsor in England – last Saturday (April 3), which went unnoticed initially, could be considered even more significant.

In good temperatures (6C and not too windy) she ran a steady race, passing halfway in 1:43:07 and only slowing slightly on the second half using her economical stride on the flat lapped course around the Olympic lake.

She re-emerged in British results in 2006 with a half-marathon of 1:40:55 but then not until the 2012-2014 seasons when now emerged fully in the British scene she won the W60 age-group in all nine of her Three Counties Cross-Country Leagues.

The following year she ran for England in the Masters International at Derry and was fifth in the winning England team in 29:23 as Copson (28:41) just beat Tabor (28:42).

That year she did beat Tabor to win the BMAF 10km road title at Gravesend in 45:19 and after a long break from marathons she ran 4:12:05 in the tough Bexhill event.

In 2018 she went even better as she won London in her age group in 3:39:07 and won the W65 category at Lisbon in 3:24:41 but she also had her greatest ever victory as she won the British Masters International cross-country at Swansea and defeated W70 winner Copson for good measure.

In 2019 she ran 3:19:37 at Berlin to rank third-all time in the UK W65 lists and was only few minutes down on Copson’s UK record which tends to suggest that she could go a lot quicker than she did at Dorney Lake as she did not run any marathons in 2020 and like most participants was short of race fitness.

Her run in Berlin was a world age-68 record and made her the oldest ever woman to break 3:20 for the marathon.

Could the Fairlands Valley Spartan be the first W70 to better 3:20 for the marathon later this year?