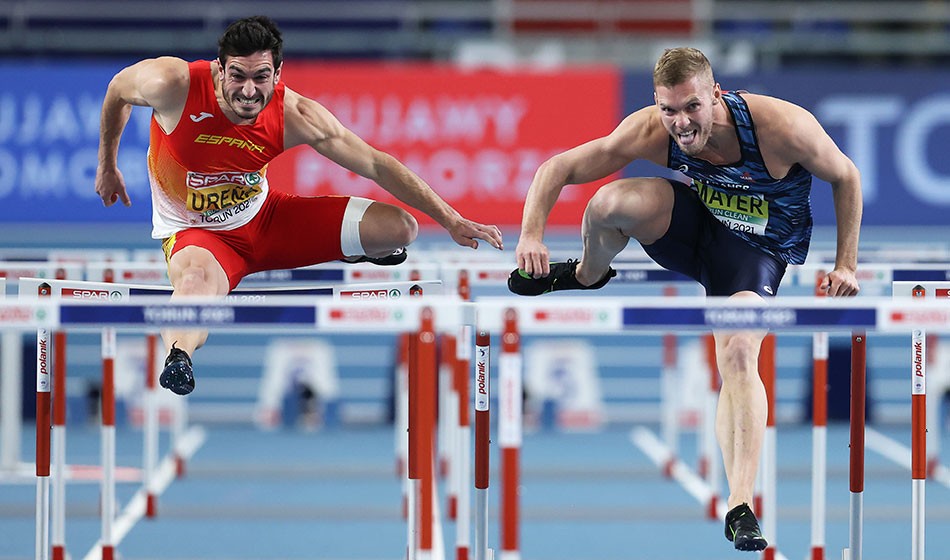 Kevin Mayer strengthened his grip on men’s heptathlon gold on what proved to be eventful start to the final day of competition at the European Indoor Championships in Toruń, Poland.

There were almost as many talking points surrounding events away from the arena as there were when it came to the action which was taking place.

The championships will come to a climax later today, with the 4x400m relays bringing the competition to a close this evening. However, there will be no Polish men’s team involved after some of the athletes tested positive for Covid-19.

Eline Berings was also unable to compete, in the women’s 60m hurdles semi-finals, after a positive test. The Belgian tweeted: “No semi-final for me… apparently I tested positive on Covid yesterday. I don’t think I need to explain how devastated I am.”

The programme continued, however, and the day’s action had begun with Mayer aiming to cement his place at the top of the heptathlon standings. By lunchtime he had well and truly done that.

The decathlon world record-holder started his day’s work by winning his heat of the 60m hurdles in 7.78, though young Swiss athlete Simon Ehammer maintained the pressure he had applied on day one with 7.82 and Urena was third with 7.87.

Going into the pole vault, Mayer’s overall lead was just 43 points, the Frenchman having accumulated 4609, with Ehammer on 4566 and Urena 4439.

The whole picture changed entirely, however, when Ehammer fell completely out of medal contention after he failed to clear his opening height of 4.50m in the pole vault.

Mayer entered the pole vault competition at 5.00m and although his opening attempt was unsuccessful, he went safely over before clearing 5.10m and 5.20m at the first time of asking. He did then make two unsuccessful attempts at 5.30m before deciding to bring his morning’s work to an end.

Pawel Wiesiolek took advantage of Ehammer’s slip and moved into bronze medal position thanks to a pole vault PB of 5.20m, while Urena was fifth-best with a season’s best of 4.90m. 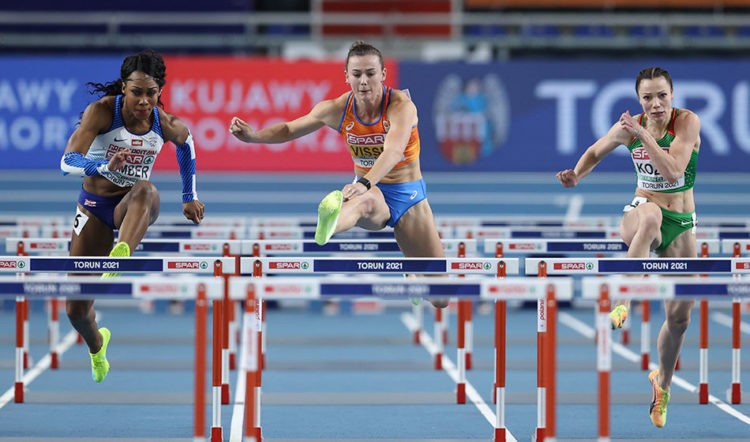 Both men’s and women’s 6om hurdles finals have been set up beautifully after some impressive performances in the semis.

For the men, British world indoor champion Andrew Pozzi made sure of his progress when winning the opening heat in 7.53. Frenchman Wilhem Belocian was quickest overall, winning heat two in 7.49. Poland’s Damian Czykier was third-fastest in 7.59 after coming first in heat three.

Sisters Cindy Sember and Tiffany Porter will represent Britain in the women’s 60m hurdles final, the former equalling her PB of 7.89 in the second semi as she finished just behind the Netherlands’ Nadine Visser (7.86). Porter clocked 7.98 to finish second the opening race, behind the 7.97 run of Nooralotta Neziri of Finland. Poland’s Pia Skrzyszowska clocked a PB of  7.88 to win the third semi-final.

In the women’s 60m semis, Switzerland’s Ajla Del Ponte qualified fastest for the final, clocking 7.19. Frenchwoman Carolle Zahi – fastest in the earlier heats with 7.22 – was second-fastest in 7.21, with Finland’s Lotta Kemppinen third-fastest with 7.24.