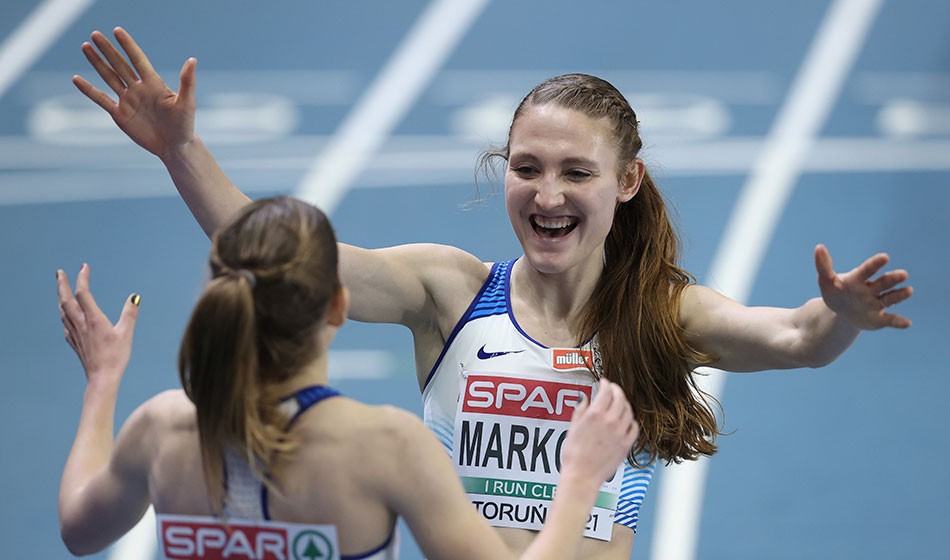 Amy-Eloise Markovc became the first British champion of the 2021 European Indoor Championships after a remarkable, well-judged performance landed her gold in the women’s 300om in Toruń, Poland.

The 25-year-old won a fascinating battle to the line, clocking 8:46.43 as the lunging Alice Finot of France (8:46.54) just pipped Markovc’s British team-mate Verity Ockenden (8:46.60) to the silver medal. All three clocked personal bests.

This event was always going to have a new champion to crown, given the absence of 2017 and 2019 winner Laura Muir. Tonight proved, in fact, to be the third time in succession that British athletes had occupied the gold and bronze medal slots on the European Indoor 3000m podium.

It had looked like being an open race and Israel’s Selamawit Bayoulgn was intent on making the early running, covering the opening kilometre in 2:56. She was shadowed by the third British finalist, Amelia Quirk.

Bayoulgn reached the 2000m mark in 5:55.44, with Quirk, the Netherlands’ Maureen Koster and Ockenden right behind. However, the US-based Markovc had been in fine form this winter – breaking the British two-mile record with a run of 9:30.69 at the New Balance Indoor Grand Prix in New York last month – and with Koster falling just in front of Quirk she made her move to the front with around 300m to go.

Entering the final lap, it had looked like Britain could be on for a clean sweep of the medals as Markovc and Ockenden vied for the lead, with Quirk in third. However it was the former who managed to create what proved to be a decisive gap as Quirk ultimately had to settle for fifth, also setting a PB as she clocked 8:48.78. 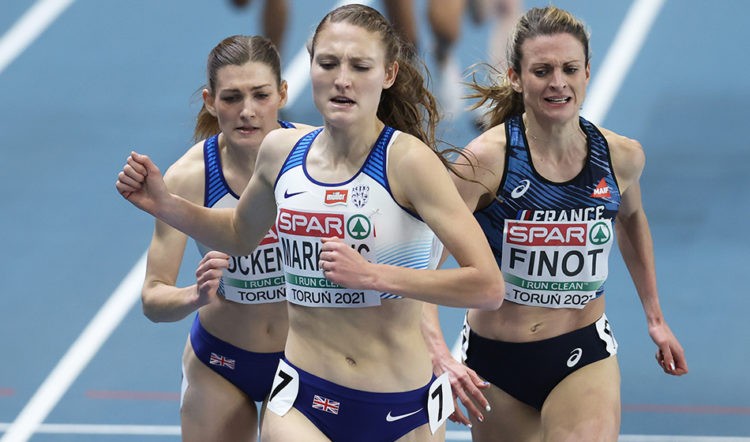 Markovc paid tribute to team captain Jodie Williams for inspiring her gold medal-winning performance in what was her first senior championships for her country.

“I’m really thrilled with this win,” she said. “Going into my first senior championship, I was nervous, but our team captain gave us a great inspirational talk and that helped. It was close in the end, but I never relax until I reach the finish line.

She added: “Last year, I didn’t compete as well as I wanted to and along the way I think there was a little bit of self-doubt. I’ve been really focused the last few races and I’ve just been really confident. Knowing that I was ready, trusting myself and trusting my instincts and having that positive self-talk throughout the race paid off because in the last few weeks things have really turned around for me and now I’ve crossed the line with the Union Jack around my shoulders, so that’s incredible.

“It’s a dream come true. That’s why we do this. We want to win medals.”

Markovc already has another target in mind as she added: “My first plan for the summer is to get the Olympic 5000m standard, which I missed by just over a second in 2019.”

Ockenden has been in the form of her life so far this year and admitted to surprising herself.

“When I first saw that we had back to back heats and finals over two days, I thought it was going to be a really tall order but, in the end, I’ve kind of blossomed with it the way it was,” she said. “I was really quite jittery yesterday in the heat and that possibly showed a little bit in the way I ran, but today I felt like a different person. I felt so calm and confident and that made all the difference today, so I’m really happy.

“The first race I did a month ago, I didn’t feel ready for it. When you don’t have constant races, it’s really hard to stay confident in your ability, so it’s been quite a journey psychologically to get ready and feel like I’m allowed to dream. This is a dream come true so now, I’m going to go home and dream bigger dreams for the summer over the 5000m and the 10,000m.”