Jess Judd and Andy Vernon were convincing winners of the senior races at the Inter-Counties Cross Country Championships at Prestwold Hall just outside Loughborough on Saturday (March 11).

Judd’s first Inter-Counties victory came in the under-13 race in 2008 but this was her first senior title, whereas Vernon had previously enjoyed one win as an under-20 and two as a senior. One-off, individual honours aside, the 31-year-old Vernon also sealed the British Athletics Cross Challenge men’s title for 2016-17, which earned him a prize of £2000.

Claire Duck finished 13 seconds behind Judd for a fine silver in the women’s race, as Gemma Steel, who bizarrely lost both her shoes during the race in the sticky, muddy conditions, was third, and Louise Small fourth.

“If you’d said to me at the start of the winter that I’d win the National Cross and Inter-Counties titles, I would not have believed you – it’s amazing,” said Judd, who is now coached by her father and trains with her boyfriend, a 3:54 1500m runner, at Loughborough University. “I think at the National I didn’t really expect to win but here I thought I’d push it near the end and go for it.”

Behind Vernon, meanwhile, Alexander Teuten was runner-up as he finished 24 seconds back to make it a Hampshire one-two, with Andy Maud third, Sam Stabler fourth and Phil Wicks fifth as Jonny Taylor in ninth led the North East Counties to their seventh consecutive team gold in the senior men’s race, equalling a feat previously achieved by Lancashire.

Selection for the IAAF World Cross Country Championships later this month in Uganda was also at stake, although moreso for junior athletes. British Athletics will pick six junior men and six junior women for Uganda but only seniors who are deemed capable of placing in the top 30 – either this year or in future – will be chosen.

Ahead of the team being named on Tuesday, Judd told AW she would consider racing in the event, but Vernon says he is not interested and prefers to concentrate on the Reading Half Marathon and early summer track races, including the Highgate Night of the 10,000m PBs.

On the world cross, Judd said: “I’d be interested. You can never turn down a senior vest, really, but I’ll sit down with my dad and talk it through. It’s still up in the air, I guess, as I don’t know if they’re going to send a (women’s) team.”

On his men’s victory, Vernon said: “I got a lead after the first short lap and then took my foot off my gas toward the end as I just wanted to get around safely. I’ve run about 110-115 miles per week since late January, including this week itself.” 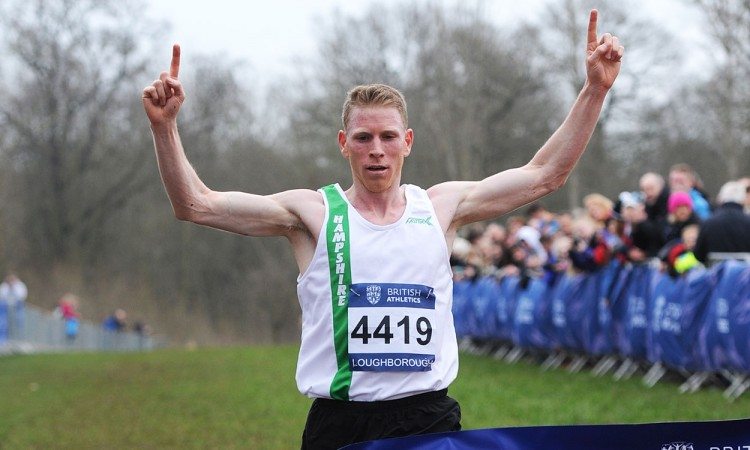 Jonathan Shields, the son of 1984 and 1988 Olympian Jane Shields, won the junior men’s race from Scott Beattie. Neither runner has ever been outside Europe in the past, so they are looking forward to representing their country in the far-flung city of Kampala in Uganda.

The duo were followed home by Luke Prior, Sam Stevens, Benjamin Davies and Hugo Milner as the winner Shields defied the form book and his own modest expectations to take gold.

The under-20 women’s race was more complicated, though, as the first athlete across the line, Amelia Quirk, was denied victory as she had inadvertently gone off course earlier in the race.

Quirk held a sizeable lead about two thirds of the way through the race and was unlikely to be caught, but confusion reigned when she found the course in front of her taped off and she veered down the incorrect route before belatedly finding her way back on to the official course to eventually cross the finish line well clear of her rivals.

Quirk immediately broke into a flood of tears as she realised her victory would not count and was too upset to talk to AW in the aftermath of the race, although her frustration and disappointment was all too evident.

Behind, Anna MacFadyen was declared the winner ahead of fellow Scottish athlete Gillian Black and steeplechaser Victoria Weir.

MacFadyen graciously admitted that Quirk had an uncatchable lead but the Forres Harrier added that she was pleased with her own run and delighted to make the team for the World Cross Country Championships, especially after a 10-hour journey from the north-east of Scotland to compete in the trials.

MacFadyen said: “I wasn’t going to catch Amelia and felt really bad for her. I thought I’d walked the course wrong before the race and that she had gone the right way but then I realised she’d gone the wrong way.”

On her own performance, MacFadyen added: “I’ve never run for GB and I’ve never been to Africa either before so it’ll be really exciting.”

Surely, though, common sense will prevail in the GB selection meeting and Quirk will be included in the team for Uganda. This winter, after all, she has won the English National title, won big races in Liverpool and Elgoibar and was fourth at the Great Edinburgh XCountry and ninth in the Euro Cross.

In the younger age groups Claudia Lance Jones and Zak Mahamed took the under-17 victories. Lance Jones is a keen athlete in more ways than one as she has done three stints of work placements at Athletics Weekly in the past year or so and here she out-kicked Alex Brown to the title. Mahamed’s win was also close as he out-sprinted Matthew Willis and the Southampton athlete said he was relieved that he was able to breathe easily in the mild, windless conditions because in previous races this winter he has been affected by asthma.

Olivia Mason, the daughter of 2:02 800m runner Natalie Tait, continued her fine form with an under-15 girls’ victory despite a stitch mid-race. Josh Dickinson proved one of the most popular winners of the day when he struck gold for Yorkshire in the under-15 boys’ race and was overwhelmed with well-wishers congratulating him.

Bethany Cook and Jaden Kennedy took the under-13 golds and as stars of the future are likely to return to Prestwold Hall in future given that Edward Packe-Drury-Lowe – the owner of the estate and a keen runner himself – wants to stage more events there.