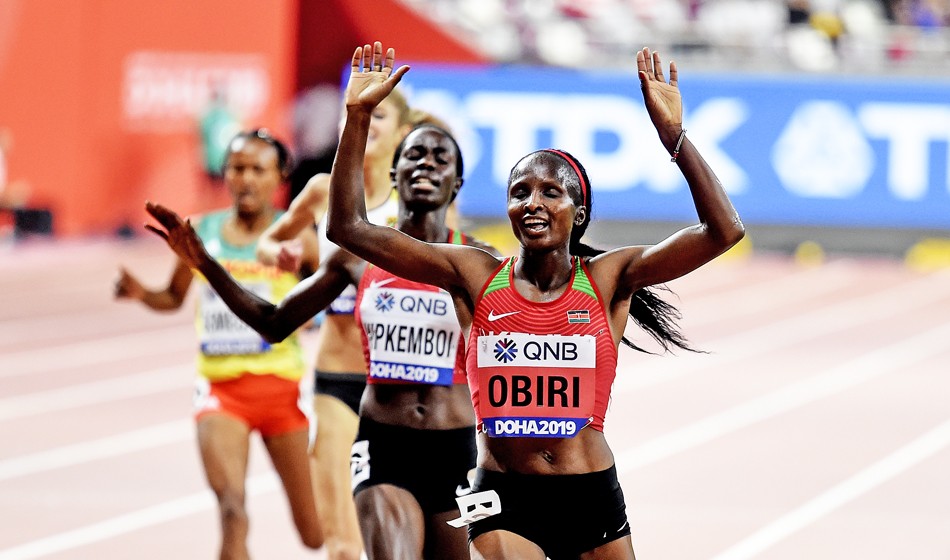 It was the greatest mass championships 5000m in history and Hellen Obiri defended her title in style after leading most of the race but then showing incredible finishing speed and courage on the last lap.

Eilish McColgan made the early running at faster than her PB pace but at 1000m Obiri was ahead in 2:56.91. The Kenyan pushed ahead after a mile and the acceleration took her past 2000m in a slightly faster 5:52.48.

It was soon down to a nearly all-African 10 contenders but as they reached halfway in 7:18.27, the group began to split and six were away – three Kenyans, two Ethiopians and Germany’s Konstanze Klosterhalfen.

The penultimate lap was 68 seconds and Obiri kicked hard and only Klosterhalfen and Margaret Kipkemboi and Tsehay Gemechu could go with it.

Obiri covered the 100m from the bell in 14.64 and that finished off the Ethiopian and then a vicious 14.21 which held off the German and her team-mate but the duo still were on her shoulder.

She could not quite keep that tempo going in the last 100m but did not need too and she won by five metres having covered the last 400m in 58.41 and the final 800m in 2:06 as she set a championships record.

Obiri, who faded away from a medal in the 10,000m, said: “It was not easy to run the record without pacemakers but I felt energy from the crowd and stayed focused and I worked hard to prove that Kenyan runners can win.”

Kipkemboi proved the stronger down the straight and was rewarded with a PB 14:27.49 while Klosterhalfen completed her first major 5000m in 14:28.43.

Weightman won the battle of her group with McColgan at the back of the pack but still setting a PB and Scottish record of 14:46.17 for 10th place.

Weightman and McColgan now sit third and fourth on the all-time lists behind Paula Radcliffe and Jo Pavey.

She added: “When the gap was made I couldn’t cover it. There’s a lot more to come and in my first global 5000m championships to come seventh I am delighted.”

Laura Weightman sets high standards for herself. She tells @Jason_AW she is disappointed with 14:44 for 7th in the world 5000m final. #WorldAthleticsChamps pic.twitter.com/mwxgw1cAF5

McColgan said: “I had it in my mind that I wanted to run low 14:40s or just sneak under. I knew from training that I was in great shape but it is not easy going out and setting the pace for everyone.

“I am a little disappointed because I feel there is more there and I am in much better shape than when I ran 14:47s but it is still a PB and a Scottish record.”

Eilish McColgan chats to @Jason_AW about her Scottish record for 5000m and why she wanted more. #WorldAthleticsChamps pic.twitter.com/heDgIwt7rj