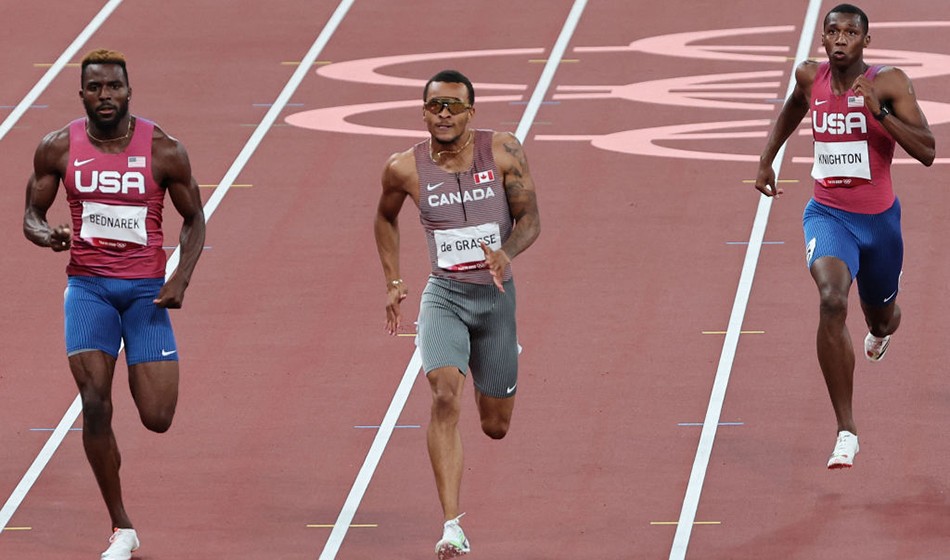 Andre De Grasse’s persistent pursuit of gold at a major championship paid off in Tokyo on Wednesday as he claimed the Olympic 200m crown in a Canadian record of 19.62 (-0.5).

The 26-year-old has been the nearly man of global sprinting in recent years. He took 100m and 4x100m relay bronze at the 2015 World Championships in Beijing followed in 2016 by Olympic 200m silver plus 100m and 4x100m bronze behind Usain Bolt in Rio.

At the 2019 World Championships in Doha he was second in the 200m and third in the 100m. Even at these Olympics, gold eluded him in a wide-open 100m final as he took third behind winner Marcell Jacobs of Italy.

He finally struck gold in the 200m final, though, as he followed in the footsteps of fellow Canadians Robert Kerr and Percy Williams, who won this event at the Games in 1908 and 1928 respectively.

Bednarek ran a PB of 19.68 for silver with world champion Lyles taking bronze in 19.74 after having scraped into the final as one of the fastest losers after easing down in the latter stages of his semi-final.

The future of this event could lie with the man who came fourth, though. Erriyon Knighton is only 17 but raced in fearless style in Tokyo and ran 19.94 in the final after setting a world under-18 and under-20 record of 19.84 earlier this season.

On the race, De Grasse added: “My coach told me I’ve got to go hard on the bend. I’ve got to stay with Kenny on the turn as he has a magnificent turn. And once I get off that turn, just relax and flow – that’s what I’m good at. Just try to stay loose, stay relaxed, keep pumping’. Keep pumping my arms.”

He added: “My legs were starting to go but of course 19.6 (seconds) will do that. But (my coach) just told me to keep pumping my arms and finish strong.”

After the race, De Grasse was able to speak to his wife – the 2016 Olympic sprint hurdles silver medallist Nia Ali – and children via video. “They are so proud of me. I wish they could be here and I can’t wait to go home,” he said.