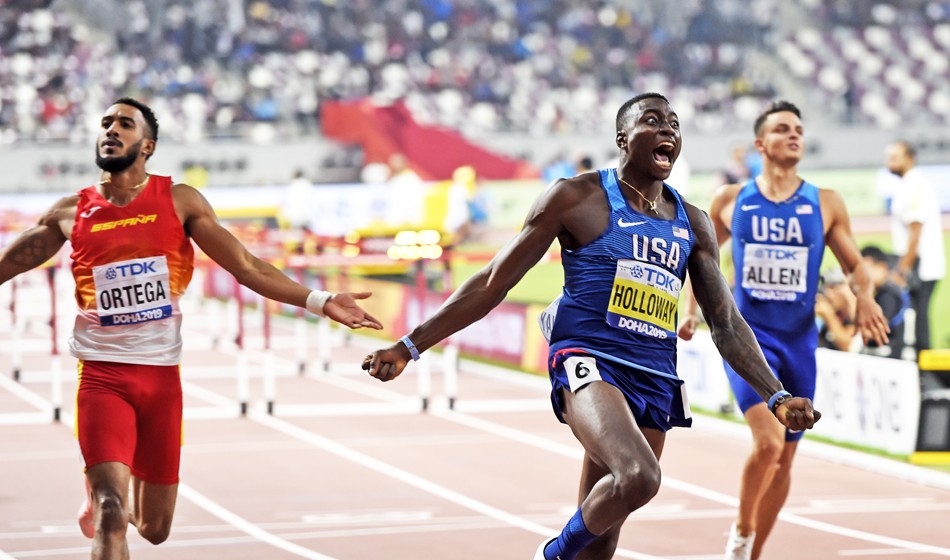 After choosing athletics over NFL, American thrives on world stage in Doha as he captures 110m hurdles title

Grant Holloway could have chosen a career in the NFL but instead decided to stick with athletics. It proved a wise decision because on Wednesday night in the Khalifa Stadium the American took the world 110m hurdles title in 13.10 from Sergey Shubenkov of Russia and Pascal Martinot-Lagarde of France.

Holloway, 21, is a super talent who has a wind-assisted long jump best of 8.32m to his name plus a 43.74 relay split in the 4x400m. With seven US national collegiate titles under his belt and a sprint hurdles best of 12.98, his speed and strength caught the eye of NFL scouts and he was offered a lucrative career in American Football. But he declined their advances and stuck with track and field instead.

“I sat down with my parents and asked if I wanted to be NFL or Olympian and my heart was to be an Olympian,” he explained. “American Football is very unforgiving on the body. Do you want to walk at 30? Or be in a wheelchair at 35?”

American Football’s loss is athletics’ gain. “This is what I dreamed of,” he continued. “I dreamed on holding up the American flag and this is the major first one for me.”

Shubenkov, the 2015 world champion who competes as an authorised neutral athlete, ran 13.15 and Martinot-Lagarde clocked 13.18 in third in a race that also saw Omar McLeod, the world and Olympic champion, veering into the lane of Orlando Ortega with disastrous consequences.

McLeod was disqualified and Ortega, the Diamond League champion, wound up fifth after having his charge for the finish impeded. Jamaica’s McLeod later apologised and suggested he should have stopped running mid-race with hindsight.

Was Holloway aware of this? “No, not at all,” he said. “My goal was to get out and stay out and that was exactly what I did. I watched the replay and there was a lot of stuff going on but I was focused on my barriers and composed my nerves and I’m now world champion… for the first time,” he added purposefully, clearly suggesting he plans to win more.

“As a hurdler you’re trained to stay in your space and focus on your own lane. When you look around at other athletes, that’s when you lose your focus. Those barriers don’t care about your body. They’re there to slow you down.”

Shubenkov, who has had an injury-hit 2019, agreed: “Running in lane nine helped me a lot so I didn’t see any of these things happening. It was like I was at the party but got kicked out at the start and missed all the action.”

During a busy year, Holloway has raced 42 times on the track in individual events and relays. But he lost form this summer to place only sixth in the Paris Diamond League and runner-up at the US Championships. “I couldn’t have done this without my inner circle,” the Mike Holloway (no relation) coached athlete said. “When times got rough they stayed with me. My parents… and I have awesome best friends and girlfriend, who kept me calm. They love me as a human being and not a track star. I ran crappy at USAs and in Paris and yet my inner circle stayed with me.”

As for Martinot-Lagarde, the European champion said fourth place in France is called “the chocolate medal” and, looking ahead to Tokyo next year, he did not want a repeat of the fourth place he finished in during the Rio Olympics “Chocolate medals are tough to digest!” he joked.

In the semi-finals three hours earlier Britain’s Andy Pozzi was disappointed to finish fifth in 13.60. “It was just messy from start to finish,” he said. “I felt like I had a lot of speed but the timing was just never there and obviously in the hurdles that makes things incredibly difficult.

“I hit hurdle two hard and five hard. Every time I pushed and tried to use my speed the timing was out and huge, huge mistakes. My timing and rhythm just isn’t back up to competition levels. My injury has kind of interrupted that this season.”

A dejected Andy Pozzi talks to AW about his semi-final exit in the 110m hurdles. #WorldAthleticsChampionships pic.twitter.com/uruAWtEKFT

In the women’s 400m hurdles semi-finals, American duo Sydney McLaughlin (53.81) and Dalilah Muhammad (53.91) looked great ahead of one of the most anticipated finals of the championships. But it was the end of the road for Jessica Turner, who finished seventh in 55.87 in McLaughlin’s race, and Meghan Beesley, who was eighth in world record-holder Muhammad’s semi in 56.89. “I just had no zip in my legs,” said Beesley.

Meghan Beesley tells @Jason_AW she just didn’t have any zip in her legs as she exited the 400m hurdles semis in Doha. #WorldAthleticsChampionships pic.twitter.com/qQBokvhSRm