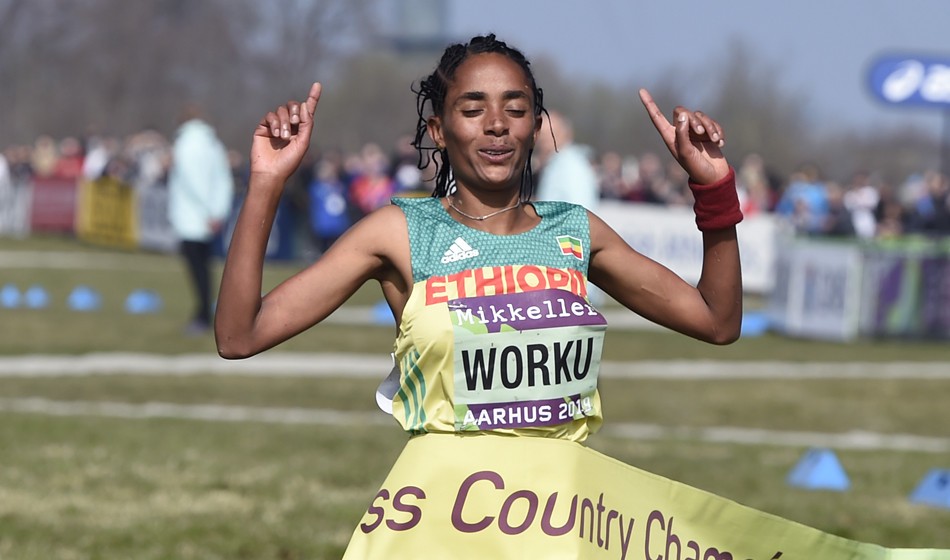 A strong anchor leg by Fantu Worku gave Ethiopia victory in the opening race of the day at the IAAF World Cross Country Championships.

Locked in battle with their east African rivals Kenya for most of the 4x2km race in Aarhus, Ethiopia surged into a decisive lead halfway through the final stage as the defending champions faded dramatically and were passed by Morocco for the silver medals.

Given the pedigree of the Kenyan team, the result was an upset. The Kenyan quartet began the race with Olympic and world men’s steeplechase champion Conseslus Kipruto but he found Kebede Endale of Ethiopia surging past him up the hill on the roof of the Moesgaard Museum toward the end of the opening 2km stage.

The mud pit, water splash and sand section did not appear to trouble the runners too much – and the Runner’s Valhalla was largely bereft of Mikkeller beer-swilling fans as it was still mid-morning in Denmark – but the big hill near the end of each stage saw mini-breakaways as the athletes charged around the circuit.

In the run-up to the championships, experienced endurance experts felt the Aarhus course would be a leveller and allow non-African nations to challenge. But this did not really prove the case and the tone was set in the first race of the day as Ethiopia and Kenya led the way.

And they’re off! The 4x2km Mixed Relay gets @Aarhus2019 off and running #Aarhus2019 pic.twitter.com/sBSgf0Xkew

On the second stage, Bone Cheluke maintained Ethiopia’s narrow lead over Kenya. This continued on the third stage as Teddese Lemi gave Ethiopia a small lead over the world 1500m champion Elijah Manangoi of Kenya as Morocco sat in third place, a few seconds adrift of the two leading countries, thanks to a strong run from former world indoor 1500m champion Abdelaati Iguider.

Halfway through the final stage, though, the race was decided as Worku pulled away from her Kenyan rival Winfred Mbithe to eventually win by 33 seconds.

Mbithe endured a painful final few hundred metres, too, as she was passed by the fast-finishing Rabab Arrafi of Morocco in the fight for silver in a dramatic conclusion to the race.

Worku said: “It was a very hard course, and especially the roof was a challenge. But I was very happy for the downhill parts and it was good we had tested the route before the race. After silver at the last championships (Kampala 2017), we went home to train hard, and we are very proud to claim the gold here.”