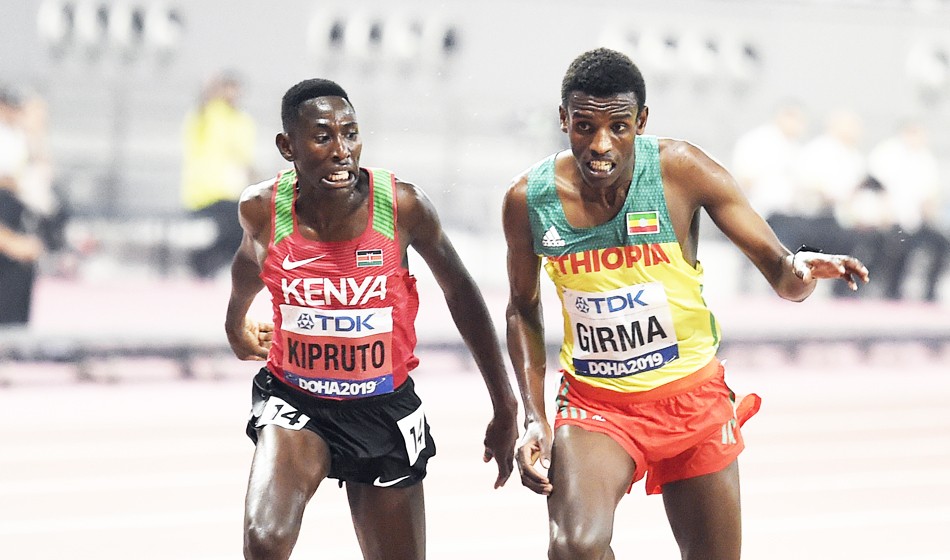 In a sensational 3000m steeplechase, Conseslus Kipruto retained his title but only with an extraordinary sprint finish as he out-dipped Lamecha Girma to win by one hundredth of a second.

That gave the Olympic champion his fourth successive medal – after silvers in 2013 and 2015 – at the end of an injury-ravaged season due to a stress fracture where he has failed to win a single steeplechase.

The Ethiopians, whose previous best in the event was fifth, seemed to have a plan of making a fast pace from the start and Getnet Wale powered through the opening kilometre in 2:39.55 with a dozen of the 15 starters in contention, albeit well spread out.

The pace marginally slowed in the second kilometre to 65-second laps and Girma was ahead at 2000m in 5:22.95 with the lead pack now down to nine. One lap later, it was down to seven and then four at the bell (7:02.65) as Morocco’s world leader Soufiane El Bakkali pushed on forcefully. Kipruto and Girma covered him and then, with 200m to go, Girma shot by and powered into the water jump with Kipruto moving into second.

The long-striding 18-year-old, in just his first serious year of training, stretched out beautifully but Kipruto followed. Despite sprinting hard himself, he made no impression until he had crossed the final barrier.

Using all his experience, Kipruto accelerated hard but the Ethiopian was going so fast himself that he seemed impossible to catch. Thanks to a well-timed lunge and raising his arm, however, the gold went to the Kenyan by the narrowest of margins.

His time was a world-leading 8:01.35, a 12-second improvement on his previous season’s best that came courtesy of a 58.6 final circuit, four barriers and water jump included!

Watch for Girma in the future though. He had never raced outside Ethopia until the World Championships trials in Hengelo this year and his only international races were third places in both Paris and Brussels. He won Ethiopia’s first medal.

El Bakkali took bronze for Morocco in 8:03.76 with Wale fourth just ahead of France’s Djilali Bedrani who finished a surprising fifth in a PB 8:05.23.

Britain’s Zak Seddon was unable to replicate the form of the heats and, after a promising 2:42 opening kilometre, he briefly looked like he was closing on the group ahead. He found the last few laps hard, though, and finished 15th in 8:40.23 as Chalo Beyo dropped out.

“I’m just not quite at that level where I can push for top ten in the world at the moment,” said Seddon. “That’s a big achievement in itself but I wasn’t going to get better.

“If you are doing everything in steps then I’ve moved from European to World final and that’s a good jump for a year, I just now have to wait another year to try and push on from that. I just wish I could have done better. I can’t be disappointed with my champs but I am disappointed with that race.”