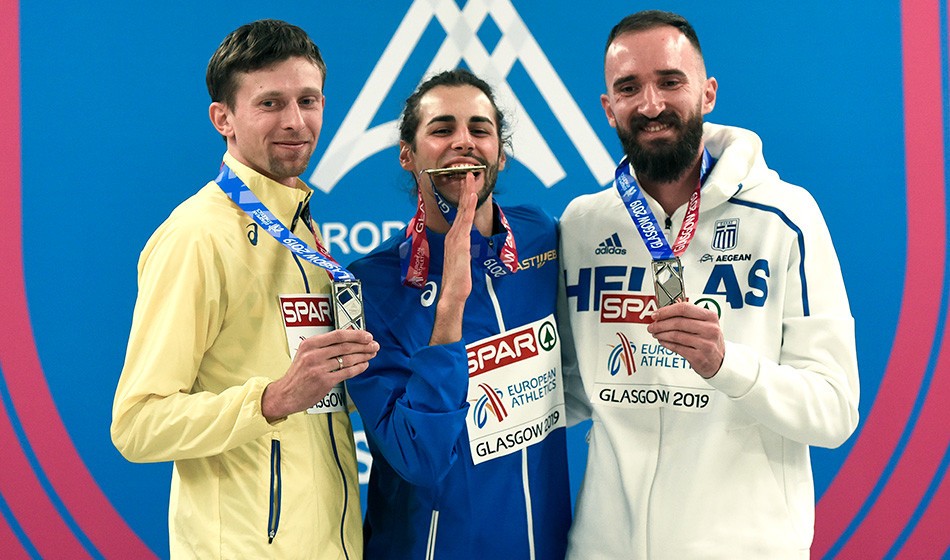 Gianmarco Tamberi is a natural entertainer. The Italian high jumper once again sported his famous ‘half beard’ in Glasgow and in addition to his unique facial hair he entered the arena wearing a tartan towel around his waist.

With an appearance like that, you are under pressure to produce the goods really. He did as well with a 2.32m clearance to take gold ahead of Konstandinos Baniotis of Greece and Andrii Protsenko of Ukraine – who both jumped 2.26m – and Chris Baker of Britain and Tihomir Ivanov of Bulgaria, who placed equal fourth with 2.22m.

Not surprisingly he celebrated in style, too, with an acrobatic back flip, several theatrical flops on to the mat and a triumphant slap of his hand on his heart. With the title secure, Tamberi then had a crack at 2.34m and two tries at 2.36m but it wasn’t to be.

The victory was a great comeback from injury. The 26-year-old won world indoor and European outdoor titles in 2016 but tore a ligament in his left ankle less than a month before the Rio Olympics and endured further ankle surgery in January 2017.

After entering the arena wearing the makeshift kilt, he walked off the track draped in an Italian flag and he said: “This city has written my comeback story. This is my first time here but I hope to come back.

“I have never reached a final when I’ve competed in London, so I was scared of coming to the UK. But Glasgow has been good to me and now I must return to London some day, as I love the London Stadium and the people and I want to gain my revenge on it by jumping well there.”

London might see him this summer at the Diamond League, although his main goal for 2019 is the IAAF World Championships in Doha, where he hopes to challenge his close friend Mutaz Essa Barshim – a big host nation gold medal hope.

Representing the host nation this time was Baker, who said: “I’m happy to come fourth place. A medal’s a medal, but if you’d have told me coming into the champs it would be a fourth place I’d have bitten your arm off so no, I’m happy. It’s a massive step in the right direction in my journey to Tokyo.”

Meanwhile, Britain’s Tim Duckworth finished the opening day of the men’s heptathlon in the lead after winning the long jump with a first-time clearance of 2.13m.

Last year’s NCAA champion had the Emirates Arena to himself at the end of the evening as he made three attempts at 2.16m. He was ultimately unsuccessful at that height but had done enough to regain top spot, sitting on 3533 points ahead of Sweden’s Fredrik Samuelsson (3475) and Spaniard Jorge Urena (3443).

Duckworth had dropped down from first to third overall at the start of the evening session, his score sitting at 2608 after a shot put best of just 12.97m which left him visibly angry and upset. However, he will be buoyed by his turnaround.