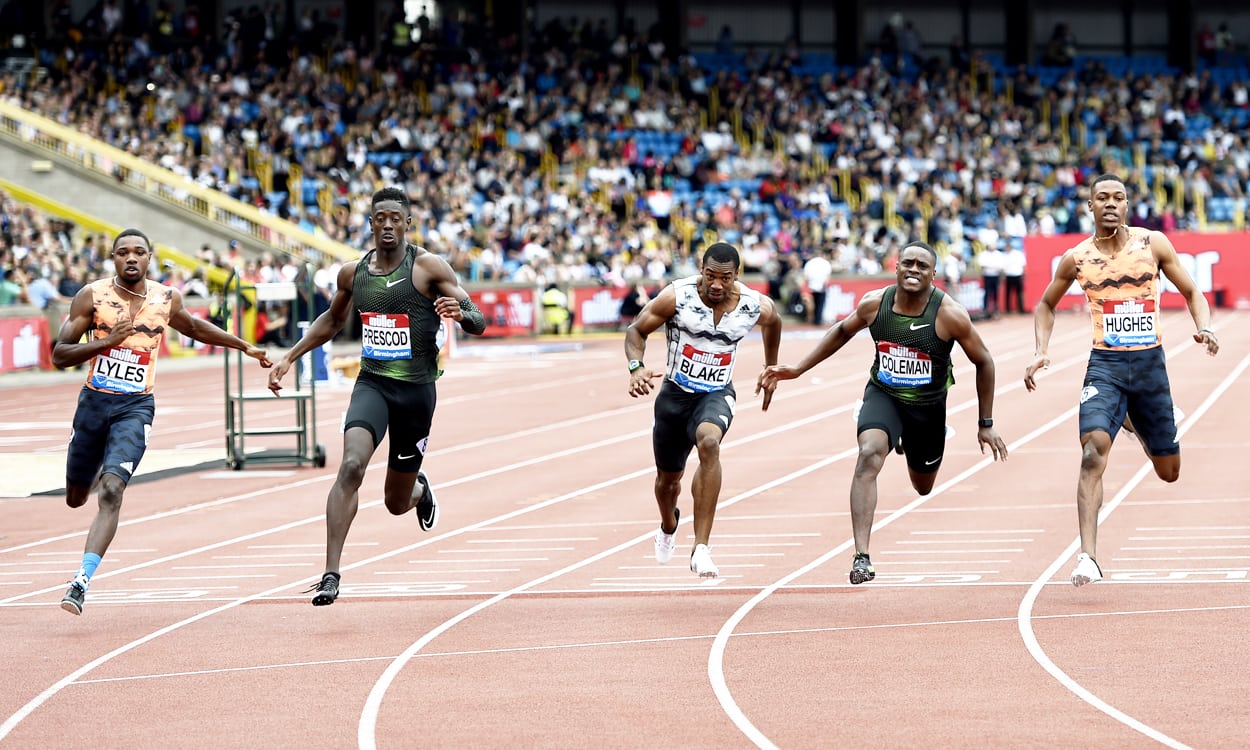 The best race of the day at the Müller Grand Prix on Saturday was the men’s 100m which lived up to all the hype and expectations. World 60m champion Christian Coleman got his usual bullet start and looked to be heading to a clear victory but not at full fitness and short of racing, he tied up in the last 20 metres.

European silver medallist Reece Prescod, who won the British Championships on this same Alexander Stadium track last month, looked to be in danger of disputing last at 50 metres but he kept his form superbly and cut down the opposition with his big strides.

At the finish he appeared to catch Coleman on the line but the latter had the better dip and he won by a thousandth of a second in 9.938.

Prescod got the consolation of a PB 9.94 (9.939) – superb running into a 0.5m/sec headwind and, at 21C, hardly optimum sprint conditions. He also won the Müller British performance of the meeting.

BBC statistician Mark Butler worked out that thousandth of second means that the Briton lost money at the rate of £4,000,000 a second!

Among his scalps were US champion Noah Lyles, who was third in 9.98, the world’s second fastest ever runner Yohan Blake, who was fourth in 9.99 and European champion Zharnel Hughes, who was fifth in 10.05, while CJ Ujah was eighth in 10.17.

Coleman said: “You never know what to expect when you come back from injury and I got my rhythm back and I came out with the win in a good time.”

Prescod said: “It was tight again and I’ve just missed out but I’ve got another PB. All I can do is keep focusing on getting better and to come out here and run 9.94 and shown the shape that I’m in, now I have to try and get even quicker.”

The next men’s performance of the meeting came from London Diamond League winner Emmanuel Korir in the 800m.

All eyes were on Greg Rutherford for his final long jump competition.

He opened with a modest 7.19m, improving to 7.43m in the second and then jumped 7.26m in the third but then passed the last three rounds.

According to Power of 10, it was his 136th long jump competition and his 132nd best but his shortest distance for over eight years.

“It’s so frustrating to not be competitive anymore because I don’t train anymore and that’s down to the fact I am just too injured,” he said. “But what I am getting, which I think I am incredibly lucky to have, is an opportunity to come out in the stadiums one last time to wave to the crowds.”

Well out ahead Luvo Manyonga, the world and Commonwealth champion, won with a meeting record 8.53m.

He opened with an 8.42m and had very big fouls in rounds two and three before his 8.53m fourth round effort. He finished with an 8.47m.

He said: I’m quite happy with that. The people watching were amazing in getting behind us no matter where you’re from. I was surprised that it was a meeting record and it shows I’m in good shape. Greg has been great and we’ve given him a farewell today as one of the best long jumpers in the world.” 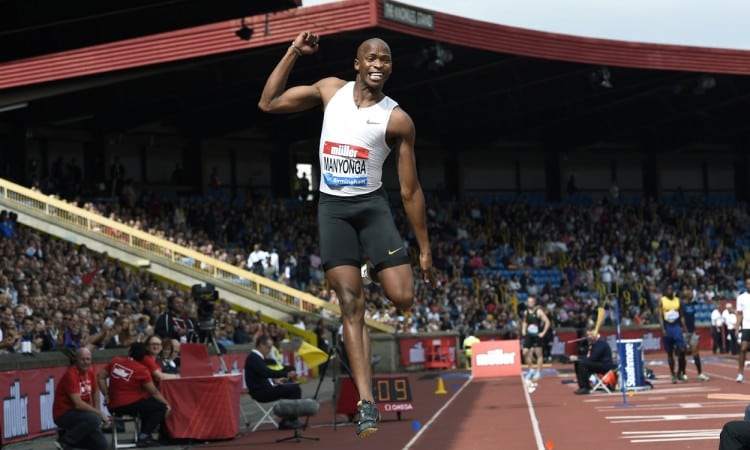 He was soon run down by the pack and Ryan Gregson, the Australian Olympic finalist, dominated most of the last lap but he could not prevent his fast-improving team-mate Stewart McSweyn – who was fifth in the Commonwealth 5000m – easily sprinting past to win in a PB 3:54.60 to become the first ever Australian winner.

On a good day for Australia, they also won the high jump with Commonwealth champion Brandon Starc winning with a 2.33m leap.

In the 110m hurdles, Orlando Ortega, who was third in Berlin, showed much better form as he won easily in 13.08, well over a metre clear of Ronald Levy’s 13.22 and European champion Pascal Martinot-Lagarde’s 13.27.

Ortega said: “I’m much happier with the time, but I am a little angry because if I ran like this at the European Championships I would have won gold.”

Andrew Pozzi was in contention over the first half but drifted back over the second half to finish fifth in 13.35.

Pozzi had won his heat in 13.42. Ortega had won the second heat in 13.44 with David King third in a season’s best equalling 13.55 to qualify for the final and then King improved that to 13.53 for eighth position.

The men’s 400m was highly competitive but disappointing in terms of times. Olympic triple jump champion Christian Taylor led the early stages and held on well to finish fourth in 45.78 as Fred Kerley, a 43.70 performer last year, won narrowly in 45.54 from European Champion Matthew Hudson-Smith’s 45.59.

The steeplechase was another disappointment for those expecting quick times but again the finish was exciting. After a promising first kilometre of 2:45.32, the pace slowed to 5:34.34 at 2000m. At the final jump, Nicholas Bett led but stumbled which allowed Olympic champion Conseslus Kipruto to saunter by.

He almost appeared to stop as he came into the last barrier and Ethiopia’s Chala Beyo briefly passed on the outside but Kipruto easily picked his pace up and went back past without looking he was under any pressure and won in 8:14.33 from Beyo’s 8:14.61.

A German one-two was expected in the javelin but it was expected to be led by Olympic and European champion Thomas Röhler but he could only finish fourth with a 84.33m throw.

The winner was European silver medallist Andrea Hofmann, who won with a big 89.82m second throw.

Former European junior champion Julian Weber was not good enough to make the German team for Berlin but he threw 86.63m to finish second.