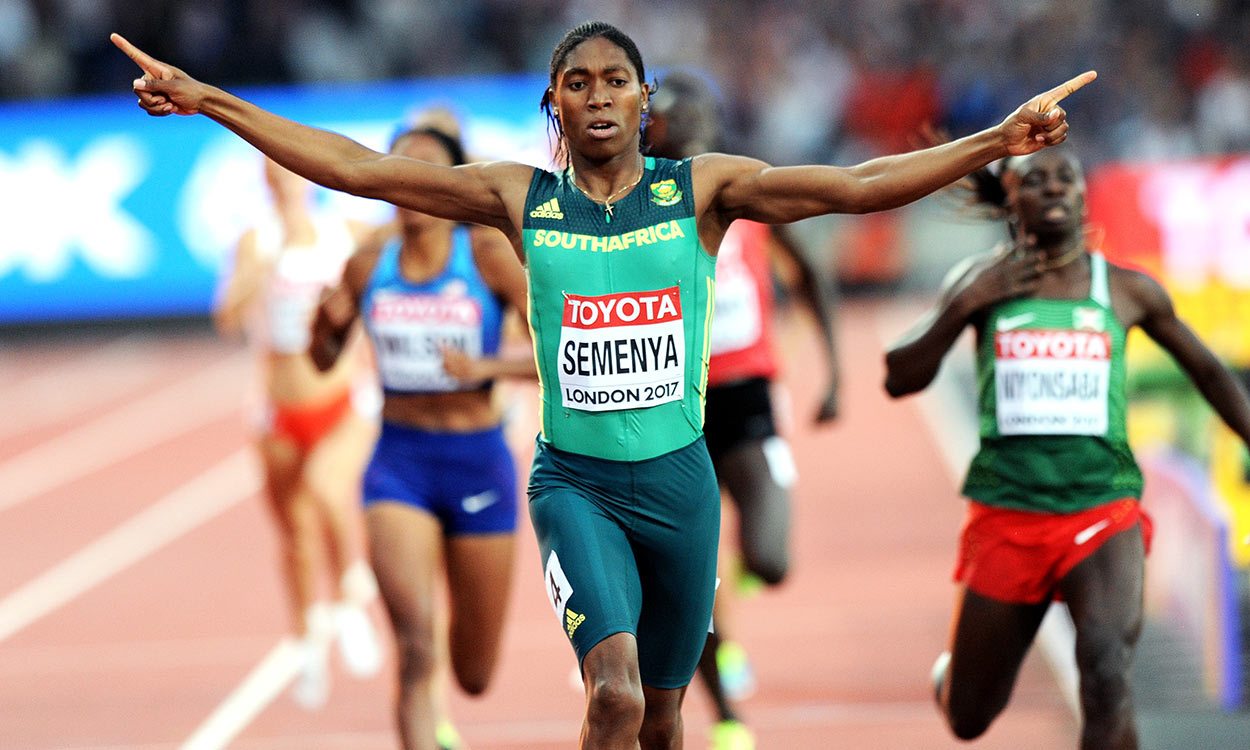 Caster Semenya was a heavy odds-on favourite to win her third world 800m title. Six days earlier the 26-year-old finished third in the 1500m but in her specialist two-lap event she was too strong for her rivals as she ran the fastest time in the world this year of 1:55.16.

A tough pace that saw Niyonsaba lead through 200m in 27.08, 400m in 57.98 and 600m in 87.07 suited Semenya as she sat back in fifth during the first 500m, running wide and not getting boxed before moving into third with 200m to go and sling-shotting past her rivals in the home straight. Sharp was also prominent as she sat in fourth at the bell but faded on the second lap as the pace remained relentless.

Semenya first broke through when she won the 2009 world title in Berlin but was also awarded the 2011 world and 2012 Olympic golds after Russia’s Mariya Savinova was disqualified. Then, in Rio last year, she won her second Olympic title.

For much of her career she has been at the centre of the hyperandrogenism debate relating to elevated levels of testosterone but in London she dismissed talk of ongoing studies into the condition as “nonsense” and “not my problem”.

After her emphatic victory on Sunday night in the Olympic Stadium, she said: “Another world title is a fantastic honour for me and I love to do it here in London. The crowd are so welcoming to me and it makes it feel even more special.

“For me it was about being patient during the race and then executing at the right time.”

Runner-up Niyonsaba said: “Everybody is watching in Burundi. In this final, everybody was looking good, all competitors are strong. So I got off there as fast as possible to make it a fast race.”

Bronze medallist Wilson added: “I did not expect the podium, I was ready to fight, attack the top three and see what happens. Against this strong field, I tried to focus on my own race. I tried to speed it up in the last 100m, no matter if I came out short of a medal. I did my best, pushed it 100 per cent.

“I feel super-happy, the crowd was super-awesome and super-special tonight. The crowds were electrifying, loud and so supportive.”

For Sharp, there were plus points to take out of the championships as the only Briton to reach the final. “I’m not that disappointed because I felt like I did give it a go in the first lap and I competed,” she said. “The plan was to go with 250m to go but I just didn’t have the legs today.

“It’s been a bit of struggle this year, even moreso because I’m in the best physical shape I’ve ever been in. Just mentally things haven’t come together as well off the back of last year.

“There’s no particular reason for it. I put a lot of energy into last year and making the final in Rio, which I did,” she continued.

“It was always going to be tough in a post-Olympic year and I’m not making excuses. Obviously eighth was the worst place I could have finished today but for me to get to this point has been a big deal. I could have thrown the towel in very early on in the season when things didn’t go to plan but I’ve persevered.”