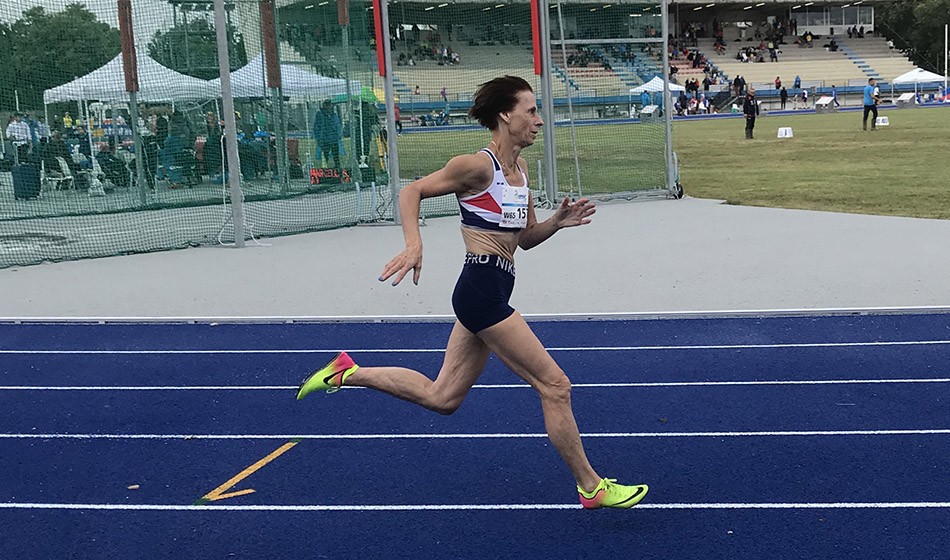 Caroline Powell, John Wright and Steve Peters among winners on day five of the European Masters Champs in Italy

Britain won five more golds in the 400m on Monday as the European Masters Championships reached the halfway stage with Caroline Powell, John Wright and Steve Peters in record form.

In the field there were wins for Gintas Degutis and for Evaun Williams while at 10,000m Clare Elms won her fourth gold of the championships.

Powell (pictured above), the reigning world and European W60 400m champion, is now in the W65 age group and had not previously broken 70 seconds outdoors this summer. However, she blasted to an impressive European record 68.67.

Fellow Brit Joylyn Saunders-Mullins was the previous record-holder from her world win in Malaga last year, but here had to settle for silver four seconds back in 72.92.

M60 Wright (pictured below) was also in record-breaking form. Like Powell, he won his second gold of the games in a superb 55.13 to leave the opposition almost four seconds back for one of the most impressive wins by any athlete in any age group.

Though he narrowly missed the legendary Guido Muller’s European record, he did beat another legends mark as he erased Steve Peters’ UK record. 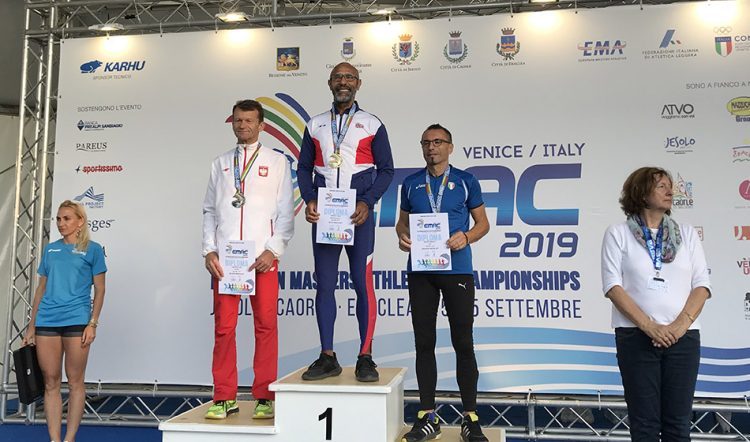 A race earlier, Peters had continued his remarkable run of successes. While far from fully fit – and in his first meeting since winning world titles in Malaga last summer – he won the M65 crown in 59.05 to win by over two seconds and also set a British record.

A recurrence of injury meant he had been unable to run in the British Masters, but the near one-year gap of competing until the 100m here did not seem to hinder him.

Peters has been titles regularly since 1994 and his win here meant he has won 38 consecutive European sprint titles over the last 25 years and it seems impossible he won’t extend that in the 200m. The 300m hurdles medallist Ian Broadhurst finished third in 61.86.

The other 400m gold was won by another stellar championships competitor Virginia Mitchell.

The reigning world, world indoor and European champion added to her many golds with a clear W55 win in 64.73 ahead of fellow Brit Janice Ellacott’s 67.24.

Tabor, who won the 1500m is the only Briton who attempted the cross-country and 400m double on successive days and won silver in both.

Another triple individual medallist is Evaun Williams. The W80 thrower won the discus by over three metres in 23.80m.

Clare Elms also won her third individual gold, to also go with her team gold when she provided the only British women’s success at 10,000m.

Having only run her first track 10,000m a week earlier, she was a little wary in very hot conditions and stayed behind cross-country runner-up Sabine Hofer before picking up in the last 3km to win by 40 seconds from Sweden’s Karin Schon.

The other gold went to Lithuanian-born Gintas Degutis, who fought off hard German opposition to win the M45 shot with a 14.68m throw.

Joanne Frost won a W40 silver medal in the long jump which was matched by W75 Iris Holder.

Victor Adcock was third in the M80 javelin with a 29.76m throw. Gold went to Finland’s Jouni Tenhu, who broke his own world record with a 45.85m final round throw after coming close with a 44.47m and 44.84m in the second and third round.

Geoff Tyler could only finish fourth in the M70 shot with a 13.12m throw but had the consolation of a British record.