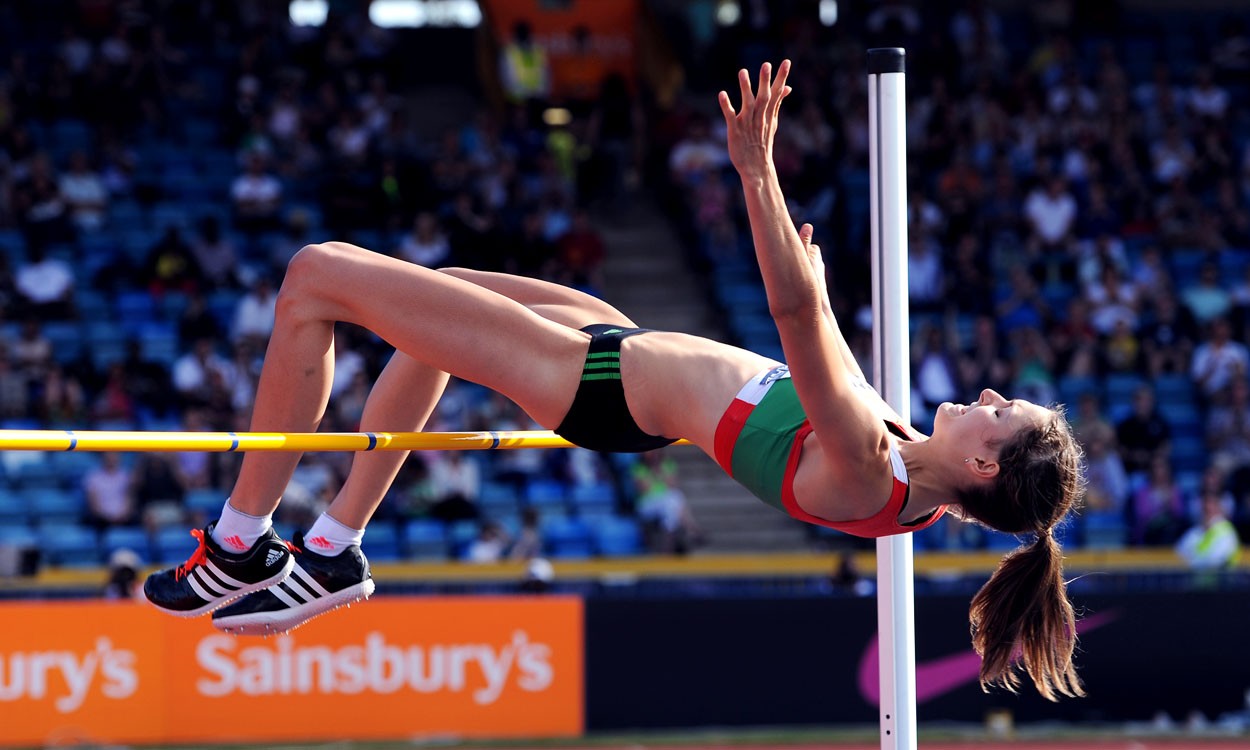 Isobel Pooley equalled the British high jump record and set an outdoor best with a terrific 1.97m clearance at the Sainsbury’s British Championships on Saturday.

The 22-year-old matched the 1.97m achieved by Katarina Johnson-Thompson indoors in Sheffield earlier this year, but no British woman has previously jumped that height outdoors until now. The UK outdoor best until this weekend was 1.96m – set by Pooley herself – in Germany last August.

The Birmingham-based athlete has been steadily improving and was rewarded for her hard work in the Alexander Stadium. She took Commonwealth Games silver last year behind Eleanor Patterson of Australia and last month jumped 1.94m at the European Team Championships in Germany in addition to keeping busy on the Diamond League circuit at events as far afield as New York and Doha.

Competing late on Saturday teatime, Pooley cleared 1.91m on her second attempt and 1.94m at her third as she saw off the challenge of Morgan Lake – the young combined eventer clearing 1.88m – and then went on to clear 1.97m first time before failing what would have been a historic 2.00m height.

It was also, crucially, her second IAAF World Championships qualifying mark of the season and she heads now into the major event in Beijing aiming to finish in the top eight.

She said: “I’m really delighted – I’ll echo what I said after the Commonwealth Games in that I knew I could win a medal but couldn’t quite believe it when I actually did it. I’ve worked on my belief and I’m making huge strides in that respect. I really believe I can jump 2.00m now and that would be a massive breakthrough.

“It was brilliant to go out there as British champion but I needed to get that out of my head and focus on the technical aspects,” added Pooley. “The atmosphere was great and I want to thank the staff and officials because they were absolutely brilliant – it’s not possible without them.”

She added: “I’ve had a really consistent year but I’m not going to talk myself up too much but everything is working at the moment and I’m confident going forward.”

In the sprint hurdles Tiffany Porter and Cindy Ofili, the US-born sisters with a British born mum, dominated arguably the most high-profile, anticipated event of the day. This was due to the presence of heptathletes Jessica Ennis-Hill and Katarina Johnson-Thompson, but Porter breezed to victory in 12.83 (-1.5) ahead of Ofili’s 12.96 as Ennis-Hill ran a season’s best of 13.10 for third and Johnson-Thompson withdrew from the final with cramp.

“It was really special to race each other and it is the first time we have in a 100m hurdles race,” said Porter on going head to head with her sister. “She is a great competitor and I’m proud how she executed the race today.”

Ennis-Hill had earlier beaten Serita Solomon in her heat with 13.17 and the Olympic champion said her troublesome Achilles has been fine and her training has gone well since her comeback combined events competition in Gotzis in late May. Lucy Hatton didn’t have such a good race, though, as the European indoor silver medallist DNF’ed after having previously hyped up a clash with the US-born sisters by telling the media “If you want to be GB we girls aren’t going to roll over. Bring it on!”

It was certainly a victory for the new recruits over the ‘born ’n bred Brits’ and Porter added: “For me as a competitor, I think it is important to let your performances speak for themselves. I don’t do too much talking, I’m just focusing on going to Beijing and doing well.”

Ofili wasn’t the only recent GB recruit in medal-winning form. Zharnel Hughes, who hails from the British territory of Anguilla, looked impressive as he won the 200m in 20.42 from Danny Talbot and James Ellington.

Wearing the colours of Shaftesbury Barnet Harriers, the 19-year-old prodigy, who trains with Usain Bolt in Jamaica, said: “Today was all about qualifying and I’m looking forward to the World Championships. Lausanne.”

With the longest throw by a British woman since the era of Judy Oakes in the Eighties and Nineties, Rachel Wallader threw 17.42m to win the shot put. The 24-year-old improved her PB of 17.17m to go No.7 on the UK all-time rankings.

Wallader, who works as a support officer for children with autism and learning difficulties, said: “I knew I was in good form and was aiming for 17.50m and I was so close. There is so much more to come. I’ve been coaching myself for over a year now (she used to be guided by Geoff Capes) and just keep testing myself. I’ve been British indoor champion before so it is good to complete the set now by winning today.”

Jade Lally took her fourth British discus title with a best of 57.37m. “It’s my first competition since mid-May as I had an operation six weeks ago, so I’m happy with the win and it was a good distance,” said the Commonwealth bronze medallist.

Nathan Douglas got the men’s triple jump off to a great start with a 16.94m effort – his best since 2010 – but Julian Reid, the defending champion, produced his best mark for six years with 16.95m to retain his crown by one centimetre.

Reid said: “I enjoyed going up against Nathan, it was a good battle. Athletics is a very thankless sport – it was such a narrow win but it’s the victory that counts.”

Holly Bradshaw’s comeback continued in the pole vault as she cleared 4.50m to win before failing three attempts at 4.61m. After now claiming the qualifying standard twice this season, Bradshaw earns automatic selection for the IAAF World Championships in Beijing in August.

Describing herself as “super impatient”, she said: “I want to be back where I was (before the injury) but I’m not quite there yet.”

On a day that saw a total of 14 finals, Nick Miller beat Mark Dry to the hammer title with a best of 75.88m, Margaret Adeoye ran 23.51 to edge out Bianca Williams in a closely-fought 200m, while Bonne Buwembo won the men’s javelin with 70.34m.

Tom Farrell defended his 5000m title in style to beat Andy Vernon. Farrell’s time was 13:42.21 but saw him turn the screw on his rivals over the final kilometre and he clocked a 1:57 last 800m and 56-second final lap.

Elsewhere, Dai Greene won his 400m hurdles heat in 50.62 – his first race of the summer and only his fourth in the past two seasons. The crowd enjoyed seeing the popular former world champion back, while there was also a big applause for Anthony Whiteman as the 43-year-old qualified for Sunday’s 800m final after finishing runner-up to Michael Rimmer in his heat.

Sunday will also see a women’s 800m final that features Lynsey Sharp, Jenny Meadows and Alison Leonard, plus 100m finals with James Dasaolu and Dina Asher-Smith, among others. They are among 22 finals on the third and final day of the 2015 British Championships.