Such was the quality of the women’s 800m semi-finals it effectively felt like three global finals in 20 minutes as Britain gained an unprecedented three spots in Tuesday night’s final.

The first semi saw Jemma Reekie go out fast before slowing while on the inside to the extent that she was almost jogging when Natoye Gaoule passed her on the second bend, the Jamaican clocking 61.57 for the first lap compared to the Briton’s 61.8.

Goule stretched out down the back straight to accelerate through 600m in 1:31.22, with Reekie still well placed on the inside bend, albeit slightly boxed in.

As they entered the straight it looked like Reekie might try to edge past Goule on the inside. That proved to be unnecessary, however, as world medallist Ajee’ Wilson faded from the challenge of the closing surge and Goule won in 1:59.57 from Reekie’s 1:59.77, which meant she had covered the second lap inside 58 seconds.

Mary Moraa of Kenya finished well but was around seven metres back in 2:00.47, with Wilson a disappointing fourth in 2:00.79 and world champion Halimah Nakaayi of Uganda last in 2:04.44. 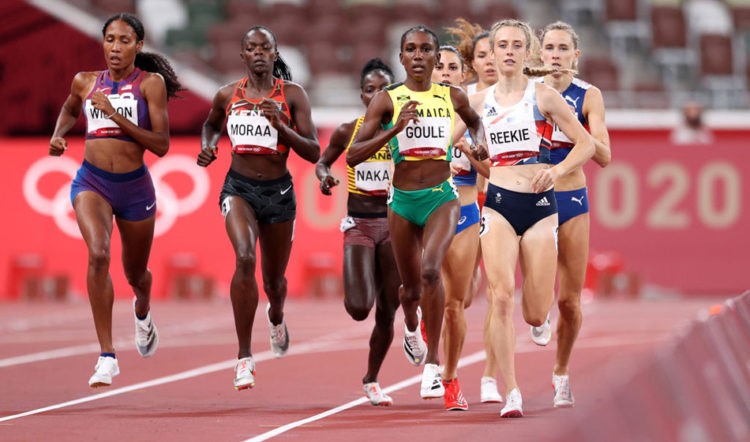 Alex Bell, who was a late replacement for Laura Muir, had the race of her life – placing herself close to Mu and coming into the straight a clear third. Despite starting to struggle in the last 100m, she easily held off the challengers behind to finish third in 1:58.83.

Lore Hoffmann of Switzerland took the important fourth spot to put herself – at least temporarily – in a fastest loser’s spot, whereas in sixth place Sara Kuivisto set a Finnish record of 1:59.41.

The final Briton in action, European indoor champion Keely Hodgkinson, ran a different race to her GB team-mates – she was only seventh at halfway in 60.0 as the leaders went through 400m in 59.41 and 600m in 1:29.87. 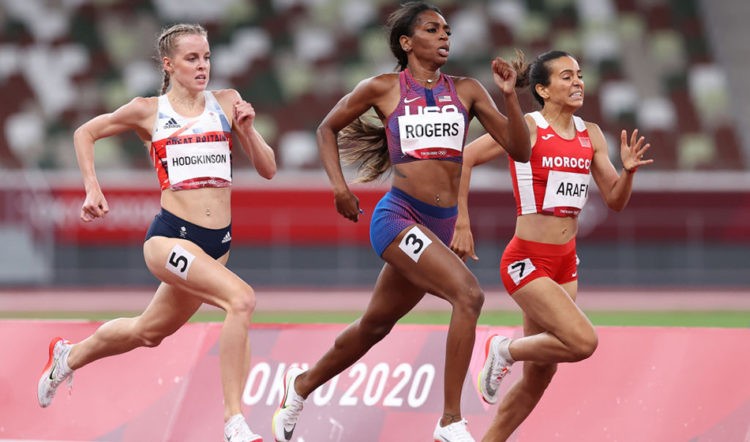 The 19-year-old was still sixth with 50 metres to go and out in lane four but she produced a 28.8 final 200m and eased into a qualifying position in the last few metres as she passed her opponents to win in 1:59.12 from Chinese athlete Chunyu Wang’s PB of 1:59.14.

In third, world silver medallist Raevyn Rogers found her 1:59.28 just about sufficient for a fastest loser’s spot with Cuban Rose Almanza’s 1:59.65 in fourth not enough.

Lamont Marcell Jacobs was the next fastest qualifier with an Italian record of 9.94 (0.1), while Enoch Adegoke of Nigeria also impressed with 9.98 (0.3) to win his heat.

American trio Fred Kerley, with 9.97 behind De Grasse, Ronnie Baker with 10.03 and Trayvon Bromell with 10.05 all move on to the next round, too. Bromell, the world No.1 in 2021, looked out of sorts, however, as he finished only fourth in his heat and goes through as one of the fastest losers. 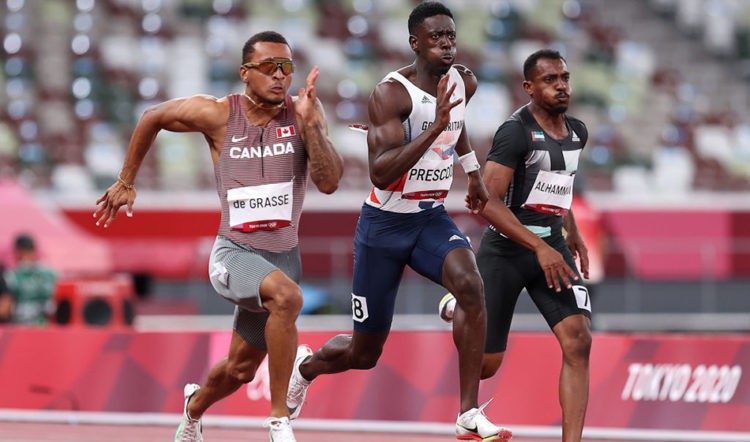 Zharnel Hughes (10.04) was just ahead of Bromell in that race and he will be joined in the next round by British team-mates CJ Ujah, who ran 10.08 for third in his heat, plus Reece Prescod, who ran 10.12 for fifth in his heat but went through as a fast loser.

As for the surprises, Bromell aside the round saw the elimination of 9.86 man Divine Oduduru of Nigeria after a false start in De Grasse’s heat.

Juan Miguel Echevarria was a class apart in men’s long jump qualifying as he soared out to 8.50m (0.2) with his first attempt. The Cuban’s mark is further than the winning distances at the last three Olympics and the 22-year-old will go into Monday’s final as the strong favourite.

Six of his rivals also jumped further than eight metres in qualifying. They included Miltiadis Tentoglou of Greece with 8.22m (0.1) while there was host nation success with Yuki Hashioka jumping 8.17m (0.4).

World under-20 champion in 2018 and an eighth-placer in the world final in Doha in 2019, Hashioka will be aiming to make the podium here for Japan.

World champion Tajay Gayle also made the final with a last-gasp 8.14m (0.3) on his third and final attempt, despite his left leg being heavily strapped. Multi-talented American JuVaughn Harrison was next best with 8.13m (0.2).