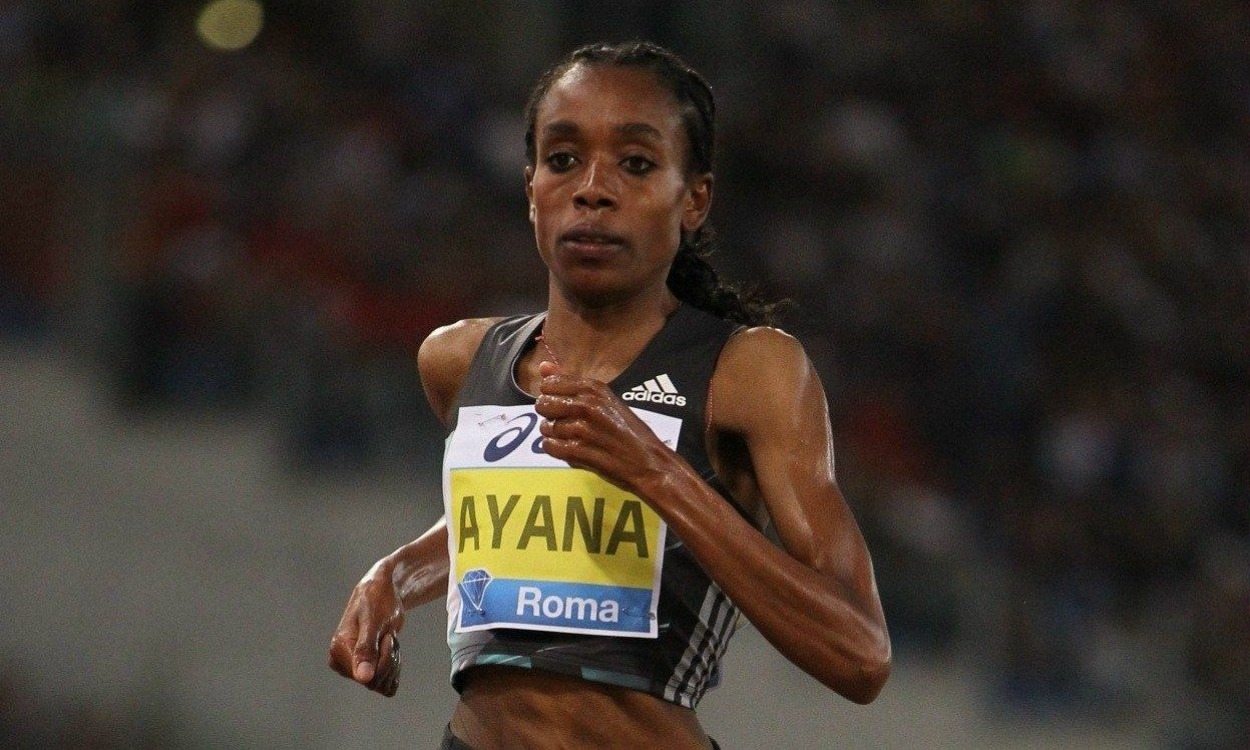 Almaz Ayana clocked the second fastest 5000m time in history as she solo-ran to 14:12.59 in the Rome Diamond League on Thursday (June 2).

The Ethiopian world champion just missed the world record of 14:11.15 set by Tirunesh Dibaba in 2008 as she finished more than 20 seconds ahead of runner-up Mercy Cherono of Kenya.

Paced to quicker than target pace through the early stages, she went through 3km on her own in 8:30.43, but in the fourth kilometre she slowed slightly off the incredible tempo as she split to 11:23.57.

Her late-race charge proved not enough, but it is surely only a matter of time before the mark goes. The time followed her 14:16.31 from the last Diamond League in Rabat and moved her one above Meseret Defar (14:12.88) on the world all-time list.

Olympic and world champion Greg Rutherford continued his top-class and consistent form as he comfortably won the long jump with 8.31m. World No.1 Marquise Goodwin was second with 8.19m, but could not match the second-round effort of the Brit, who had already registered legal jumps of 8.26m, 8.30m, 8.24m and 8.20m this year.

Caster Semenya equalled her own fastest time in the world this year as she easily won the 800m in 1:56.64. The South African has been a class apart this year, returning to the form that took her to the world title in 2009. She proved it again as she made her only challenger in the last 100m, Francine Niyonsaba, look pedestrian, stretching away to win by more than one and a half seconds from the Burundian (1:58.20).

In third, Britain’s Lynsey Sharp ran her fifth quickest ever time of 1:59.03 to improve on her season’s best. In the B race, Shelayna Oskan-Clarke was sixth with 2:02.15 behind Ethiopia’s Tigist Assefa.

The meeting finished on a high with yet another world lead, in this instance by Conseslus Kipruto in the steeplechase. Achieving his third successive Diamond League win this year, the Kenyan just missed the eight-minute barrier as he stopped the clock on 8:01.41.

He was challenged on the last lap by Jairus Birech, who dropped out of the reckoning when he fell, eventually crossing the line second with 8:11.39.

Colombian Caterine Ibarguen extended her winning streak to 34 competitions as she went out to a best of 14.78m in the triple jump. Kazakhstan’s Olga Rypakova held the lead until the third round with 14.51m, but Ibarguen went to 14.64m before going even further in the final round.

In the 400m hurdles, Jamaica’s Janeive Russell took two tenths off her best as she ran a world lead of 53.96 seconds.

Russell, who was fifth in last year’s World Championships, added to her victory in the Rabat Diamond League. Britain’s Eilidh Doyle, who began her season well with victory in Doha, enjoyed a solid run for third with 54.81.

Justin Gatlin denied Ameer Webb a sprint double as he won the 100m in 9.93. Earlier, new talent Webb had won the 200m easily in 20.04 and he took nine hundredths off his best as he clocked 9.94 for second in the shorter event, where Britain’s CJ Ujah was sixth with 10.15. However, the quickest Brit of the night was James Dasaolu, whose 10.11 was enough to win the B race by a massive 0.29 seconds.

In a high jump competition eagerly watched by the home crowd, Ukraine’s Bohdan Bondarenko spoiled the hopes of the Italian crowd as he beat world indoor champion Gianmarco Tamberi into third, sandwiching Britain’s Robbie Grabarz in the finishing order. On his second attempt Bondarenko cleared 2.33m, a height at which the other two failed three times as they registered bests of 2.31m. Britain’s Chris Baker was eighth with 2.24m.

World 400m champion Wayde van Niekirk saw off the home-straight attentions of Grenada’s Bralon Taplin as he clocked 44.19 while he competed outside his native South Africa for the first time this season. Taplin clocked 44.41 as another sub-44 man Isaac Makwala was third with 44.85.

Spain’s Orlando Ortega took victory in the 110m hurdles with 13.22 after Britain’s Andrew Pozzi looked a possible winner earlier on. France’s Pascal Martinot-Lagarde came by for second with 13.29, but Pozzi’s 13.37 nevertheless showed he is in the form of his after his recent 13.32 PB.

Jamaica’s world 200m silver medallist Elaine Thompson stepped down to 100m and was just outside her best as she was timed at 10.87, beating American English Gardner (10.92) into second. Britain’s Desiree Henry was fifth with 11.15.

Valerie Adams added a centimetre to her season’s best as she continued her winning ways in the shot put with 19.69m.

The meeting was set under way by the male discus-throwers, the best of whom was Poland’s Robert Urbanek, whose 65.00m proved the key as world No.1 Piotr Malachowki languished in sixth.

Distances were down in the women’s javelin, too, as South Africa’s Sunette Viljeon found 61.95m enough to take maximum Diamond League points.

In the disability 100m Sophie Kamlish set a UK T44 record of 13.36 as she beat team-mate  Laura Sugar into second, the latter just outside her best with 13.58.