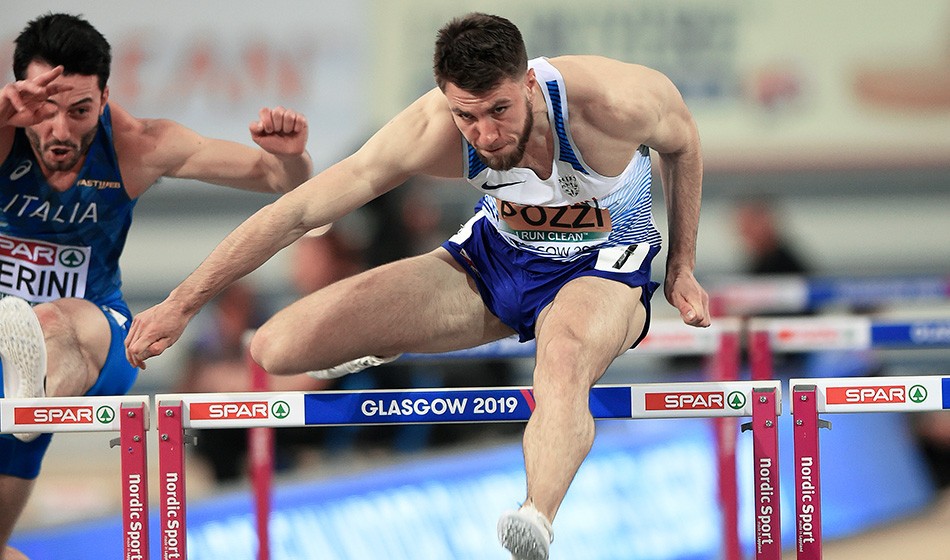 There were many impressive performances on a busy weekend of athletics action around the world, with Jemma Reekie breaking the British indoor 800m record in Glasgow and Keely Hodgkinson setting a European indoor under-20 800m record in Vienna (report here), Anna Emilie Møller and Mahamed Mahamed dominating at the BUCS Champs in Edinburgh (report here) and Charlotte Arter ‏improving the world parkrun record in Cardiff (report here).

Here are some of the other highlights.

The world bronze medallist’s mark is just 15 centimetres off the world indoor record set in 2011 by Tamgho, who is Zango’s coach.

Britain’s Andrew Pozzi also enjoyed a strong start to his season as he first clocked 7.56 in the 60m hurdles heats and then ran a world-leading 7.52 to win the final for his fastest ever opener. France’s Pascal Martinot-Lagarde was second in 7.66.

British record-holder Holly Bradshaw won the pole vault with a clearance of 4.61m.

🥇 461 🥇
🇫🇷 Thanks Paris for putting on such an awesome comp!

ALSO thanks to Mizuno my onesie felt so special! pic.twitter.com/r31HuU2pwI

Brett Robinson and Helalia Johannes both ran national records to claim victory, with Robinson breaking the Australian record with 59:57 and Johannes improving her own Namibian record with a time of 68:10.

In an exciting sprint finish to the men’s race, Yusuke Ogura ran a Japanese record of 60:00 in second as Britain’s Callum Hawkins was third in 60:01, just one second off his PB set when winning the same race three years ago.

After storming down the track on the way to the finish line, Hawkins stopped his watch and threw his hands to his head in disappointment at just missing his PB, which is also the Scottish record, and a sub-one-hour time.

Britain’s Keely Hodgkinson clocked 2:01.16 to break the European under-20 800m indoor record when winning the race.

Tom Keen clocked 3:41.44 for 1500m to improve on the UK under-20 indoor record which had been held by former AW employee Matt McLaughlin since 2013.

Andrew Robertson clocked 6.62 and Eugene Amo-Dadzie a 6.72 PB to finish first and second respectively in the 60m.

Germany’s Malaika Mihambo competed in both the 60m and long jump, first clocking 7.37 in the sprint heats and then jumping a best of 6.83m. Maryna Bekh-Romanchuk won the long jump with a world-leading PB of 6.92m as Britain’s Abigail Irozuru was sixth with 6.56m.

Renaud Lavillenie and his younger brother Valentin claimed a one-two in the pole vault, with both clearing 5.70m and Renaud winning on countback.

The controversial format for the men’s long jump prompted much discussion, as Eusebio Cáceres won with 7.99m but Julian Howard placed third despite having a better earlier jump (7.88m) than second-placed Vladyslav Mazur (7.84m) as Howard fouled in the last round, which was the ‘final’ to decide the top three placings.

I’m so pleased I got out. This format is utterly ridiculous.
The athletes should skip the first 5 rounds and then just jump the last. The sports gone mad. #LongJump https://t.co/VUIAMxvJGY

Britain’s Cindy Ofili and her sister Tiffany Porter both clocked 8.19 to achieve a one-two in the 60m hurdles.

Britain’s Sophie McKinna started her season by throwing 17.56m in the shot put and Amelia Strickler an indoor PB of 17.51m.

He also attempted the Olympic standard height of 2.33m.

Dominic Ogbechie cleared 2.17m in the high jump as he made a winning return after injury.

Running for England, Lucy Reid was second in the women’s race in 73:59 while Mohamud Aadan was the top-placed British male, clocking 63:31 in eighth.

The event incorporated the England Athletics 5-mile Championships with runner-turned-triathlete Beth Potter winning the women’s race in 25:34, a time which puts her third on the UK all-time list for the distance. Only Paula Radcliffe (24:47) and Liz McColgan (25:25) have run quicker among Brits.

The top eight men all went sub-30 minutes in windy conditions, led by Nick Goolab’s race record of 29:01. Ben Bradley and Owen Hind both ran 29:11 for second and third as Charlie Hulson finished fourth in 29:14.